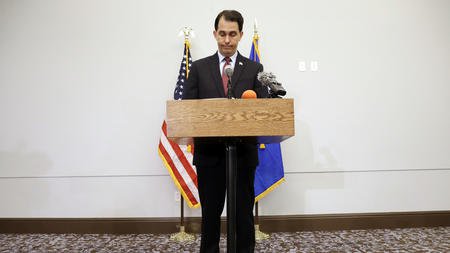 Scott Walker has dropped out of the 2016 Presidential race. He started with great promise, taking a strong stand on illegal immigration and even mentioning LEGAL immigration. But then he started waffling, privately assuring donors and open borders "conservatives" like Stephen Moore that he didn't really mean it.

Mr. Moore said he had become concerned about Mr. Walker’s stance in recent weeks, but was reassured after a phone call with the Wisconsin governor.

But Mr. Moore also said he was not convinced that Mr. Walker was quite the immigration hawk as he may appear now. Rather, he called the governor’s positioning “a work in progress.”

Who is the real Scott Walker? Well, now we know. After he failed to gain traction with his compromised message, Walker dropped out and spent his last seconds on the public stage denouncing Donald Trump.

Today, I believe that I am being called to lead by helping to clear the field in this race so that a positive conservative message can rise to the top," Walker said in a news conference. "I encourage other Republican presidential candidates to consider doing the same so the voters can focus on a limited number of candidates who can offer a positive conservative alternative to the current front-runner."

Many of Walker's supporters (and donors) are already flocking to Rubio, which speaks volumes about what they were expecting to get from Walker had he made it to the White House [Scott Walker Dropping Out Is Good News For Marco Rubio, by Dylan Matthews, Vox, September 21, 2015].

As for Trump, he showed magnanimity in victory, praising Walker as a "very nice person who has a great future."