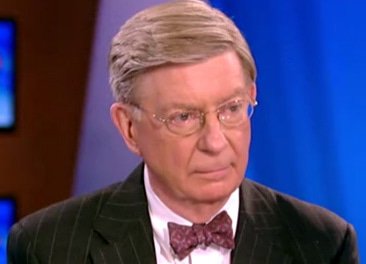 George Will is the quintessential pundit of the Beltway Right. He has a reputation as a "deep thinker," but he doesn't have anything important to say. His most famous writings aren't about politics, but about baseball. And he's second only to Thomas Friedman (another "respected" journalist) in his mastery of the perfectly incoherent phrase.

Will, who famously derided Reagan supporters as "Kamikaze conservatives" in a 1974 column, has decided the greatest moral threat to the Republic is Donald Trump's "Police State."

Trump, however, has made something novel discussible: He proposes turning America into a police state in order to facilitate ethnic cleansing.

When asked whether the forced deportation of 11 million illegal immigrants — almost as many people as passed through Ellis Island in 60 years — might take five or even ten years, Trump scoffed: “Really good management” will get this done in at most two years. To meet a two-year deadline, his “management” wizardry will have to quickly produce a network of informers to assist at least 100,000 new law enforcement officers equipped with battering rams and bloodhounds.

[Candidate Trump Will Soon Become One of the 'Losers' He Constantly Mocks, National Review, September 26, 2015]

Peter Brimelow has called this process of dispossession "electing a new people" and needless to say, after this process is completed, the Republican Party (and the historic American nation) has no future. But Will doesn't even seem aware of this.

What can you expect from a man who thinks abolishing the Consumer Financial Protection Bureau should be at the top of the list for the Republican Congress? What political insight can you derive from a noodle armed charlatan who thinks "the next Goldwater" is a pro-immigration Indian-American banker who lost the California gubernatorial race by 20 points to Jerry Brown?

The Beltway Right has no future because none of its thinkers are even capable of discussing the political transformation taking place, let alone proposing solutions. What is termed the Alternative Right is the only intellectual force capable of maturely discussing the critical issues surrounding The Great Replacement.

The danger facing the American Right isn't immature "populism" by Trump supporters. It's Conservatism Inc. pundits who posture as intellectuals even though they are incapable of reading, let alone writing, a book suitable for those with a three digit IQ.