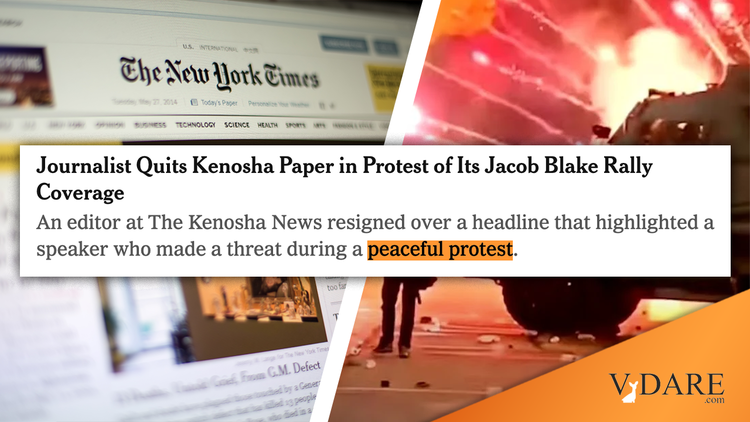 They just can’t drop the Peaceful Protest cliche, can they?

A journalist resigned on Saturday from his job at The Kenosha News after objecting to the headline of an article that chronicled a rally in support of Jacob Blake, a Black man who was shot seven times in the back by a white Kenosha police officer.

Daniel J. Thompson, a digital editor who said he was the only full-time Black staff member at the paper, which covers southeastern Wisconsin, said the headline did not accurately sum up the article and gave a false impression of the rally itself, which he attended.

The headline, which appeared on the Kenosha News website on Saturday, highlighted a remark from one rally participant: “Kenosha speaker: ‘If you kill one of us, it’s time for us to kill one of yours.’” The online version of the article included a 59-second video showing the person who spoke those words, a Black man who was not identified by name. …

The rally, billed as “Justice for Jacob,” came days after Kyle Rittenhouse, a 17-year-old from Illinois, was charged with homicide in the killings of two protesters during earlier demonstrations in Kenosha.

If the protests in Kenosha are now finally peaceful, that might have something to do with young Mr. Rittenhouse.

… Shortly after 7 p.m. that day, he sent a text that included a screenshot of the headline to Bob Heisse, the executive editor of The Kenosha News.

“I don’t even know if I can associate with the company after that,” Mr. Thompson said in the text exchange. “I need to calm down, but I wanted you to know immediately.”

According to a screenshot provided by Mr. Thompson, Mr. Heisse responded, “Yes you should calm down. That is a public threat, and it is an exact quote at a rally that was to that point totally on message.”

We’re the New York Times and you’re just the Kenosha News. How dare you put headlines in your newspaper that we wouldn’t put in our newspaper?