Yes, Virginia (Dare), There IS A Deep State Conspiracy Against Trump. David Frum—Perhaps Unguardedly—Says So! 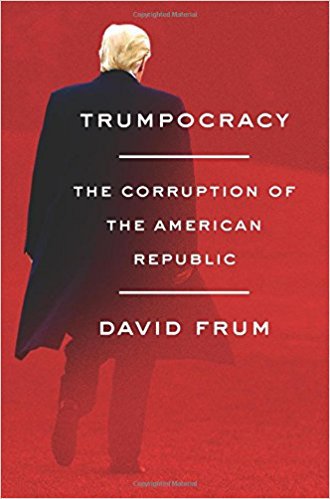 The Main Stream Media/ Democrat complex obviously got Journolist-type orders to shout down the Nunes Memo, which questions the FBI’s good faith in seeking to surveil (“wiretap”) Trumpworld, and so of course my old friend David Frum, a career MSM Token Conservative, has obediently joined in. Yet his current book Trumpocracy, clearly designed to cater to the apparently insatiable Ruling Class Hate-Trump hunger, confirms—perhaps unguardedly—that Yes, Virginia (Dare), there is indeed a Deep State AND IT IS MOUNTING A COUP AGAINST TRUMP. Significantly, Frum’s evidence is actually quite separate from the current FISA surveillance controversy. But it has been completely missed by reviewers and interviewers. They hate Trump, they really HATE him.

Trump had the power of the presidency; his bureaucratic opponents, the weapon of the leak. No administration ever has been so perforated by leaks as Donald Trump’s…

Frum doesn’t actually say why General Flynn was “profoundly compromised,” other than that he was a distastefully powerful speaker on the campaign trail on the subject of Hillary Clinton’s felonious but Establishment/ Comey-covered liability for breaching national security via her unsecured private server. I can assure Frum that Flynn was not the only security-cleared veteran of the U.S. military to be shocked by this [The Shame of Shamelessness: No Standards for Insiders by David G. Bolgiano, Weaponsman.com July 8, 2016].

So it’s hard to avoid the conclusion that what really motivated Frum was the possibility that Flynn might threaten the bizarre neoconservative-led Holy War against Russia to which the U.S. has apparently been committed. Thus Frum reports with relief:

Leaks deterred the Trump administration from lifting sanctions on Russia as soon as it entered office, as Michael Isikoff reported for Yahoo News in June 2017:

In the early weeks of the Trump administration, former Obama administration officials and State Department staffers fought an intense, behind-the-scenes battle to head off efforts by incoming officials to normalize relations with Russia, according to multiple sources familiar with the events.

Unknown to the public at the time, top Trump administration officials, almost as soon as they took office, tasked State Department staffers with developing proposals for the lifting of economic sanctions, the return of diplomatic compounds and other steps to relieve tensions with Moscow.

These efforts to relax or remove punitive measures imposed by President Obama in retaliation for Russia’s intervention in Ukraine and meddling in the 2016 election alarmed some State Department officials, who immediately began lobbying congressional leaders to quickly pass legislation to block the move, the sources said. [How the Trump administration’s secret efforts to ease Russia sanctions fell short]

VDARE.com does not take positions on foreign policy. But it is surely impossible to read this as anything other than a (to date successful) attempt by the permanent bureaucracy a.k.a. the Deep State to block the policy preferences of a democratically-elected president.

However, Frum has even more shocking revelations. He continues:

Yet the same leaks that thwarted Trump’s pro-Putin agenda also exacted a heavy price. Those leaks revealed US surveillance capabilities in a way that compromised national security. For example, Greg Miller, Adam Entous, and Ellen Nakashima broke the news in the February 9, 2017, Washington Post that Flynn had lied when he denied speaking to Russian ambassador Sergey Kislyak about sanctions relief.

Nine current and former officials, who were in senior positions at multiple agencies at the time of the calls, spoke on the condition of anonymity to discuss intelligence matters.

All of those officials said Flynn’s references to the election-related sanctions were explicit. Two of those officials went further, saying that Flynn urged Russia not to overreact to the penalties being imposed by President Barack Obama, making clear that the two sides would be in position to review the matter after Trump was sworn in as president.

“Kislyak was left with the impression that the sanctions would be revisited at a later time,” said a former official.[ National security adviser Flynn discussed sanctions with Russian ambassador, despite denials, officials say]

Flynn’s problem here was not that his comments to the Russian Ambassador were in themselves were in themselves illegal—Pat Buchanan argues here that they were not. The problem is that any obfuscation in an FBI interview, whether under oath or not, is illegal. When the government has undisclosed recordings, and the interviewee is relying on his memory, this is very close to entrapment—at the least, a perjury trap.

But why did the government have recordings in the first place? Frum continues:

Kislyak, being no novice and no fool, would have conducted his conversation with Flynn by some modality he regarded as safe from American surveillance. In order to expose Flynn’s lie, the nine officials who talked to the Post also revealed to the Russians that the United States had cracked a link that Russian intelligence operatives had regarded as secure.

It had to be assumed that the Russian embassy would immediately alter its communications methods, denying the United States future information flows, at least for some period of time. To protect the United States from a compromised national security adviser, nine senior intelligence officials agreed to burn an important American national secret.

My question—and I believe the question of all American patriots reading this—is:

[M]ore than any president in history, [Trump] works in an office he cannot trust and knows he cannot trust. Donald Trump may not be a proper president, or a competent president, or a patriotic president, or even a legitimate president in any larger ethical sense of the word “legitimate.” [Whatever that means. Was John F. Kennedy “legitimate”?] But he is the lawful president, charged with public functions. In order to stop him from betraying his office and the country, the professionals around him have also effectively prevented him from fulfilling his office and serving his country…

When President Trump banned travelers from certain Muslim-majority nations from entering the United States, he was exercising a lawful power of his office. It’s well-established law that the president has power to bar “any class of aliens” both as immigrants and as nonimmigrants and to impose on their ordinary comings and goings “any restrictions he may deem appropriate.”[8 U.S.C. 1182, Sec 212(f)]

Yet the courts have shredded Trump’s travel ban anyway. In the words of the first of a series of federal judges to rule against the Trump administration: the courts could not overlook “significant and unrebutted evidence of religious animus driving the promulgation of the Executive Order and its related predecessor.” [Highlights From Court Ruling Halting Trump's Revised Travel Ban, NYT, March 15, 2017]

At the time of that decision, Frum wrote a post critical of it in the Atlantic:  The Dangerous Precedent Set by Judicial Attacks on Trump’s Travel Ban [March 16, 2017].

Through a politic sleight of hand that has apparently deceived his Establishment enthusiasts (though not VDARE.com) Frum obscures this descent into what VDARE.com calls “Kritarchy” by blaming it on Trump’s personality:

To amend an old saying: Bad presidents make bad law. Because President Trump behaved in what the courts regarded as a wrongful way, the courts responded in ways they would have regarded as wrongful only twelve months before.

In the travel ban litigation, the courts asserted a new power to disregard long-established and long-accepted formal law [is there some other kind of law?] if the president’s personal words created a basis for mistrusting his motives. In response to the danger posed by Trump, other holders of American power are tempted to jettison their historic role too, and to use any tool at hand, no matter how doubtfully legitimate, to stop him. In order to save the constitutional system, its defenders are at risk of corroding it.

Why has Frum given these hostages to fortune (apart from the fact that the Left is too Trump-Deranged to notice?)

One reason: he’s fundamentally a policy wonk, fascinated by details (and quietly onside on immigration).

The other reason, as Steve Sailer argued some years ago: Frum is at base surprisingly emotional. His (certainly profitable) revulsion from Trump, shared by so many (but certainly not all) other Jewish intellectuals (here, here, here, here, here), has left him simply unable to reckon with or even acknowledge the plain facts that he himself has here presented.