#DareToCelebrate Virginia Dare’s Birthday! Will Her Statue Be Torn Down Next—Along With America? 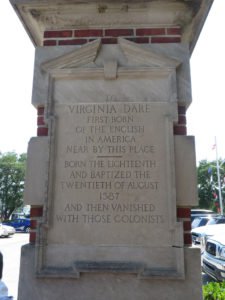 Friday August 18 is the 430th birthday of Virginia Dare.  Incredibly, her 350th birthday was celebrated by a speech from Democratic Party hero President Franklin D. Roosevelt, who also personally helped design the commemorative stamp. But on present form, it may seem that her statue won’t even be in Roanoke’s Elizabethan Gardens in on her 450th birthday in 2037—it will have been torn down by a Communist mob tacitly supported by Democrat politicians (probably related) and replaced with a statue of Malia Obama. VDARE.com’s message: stay the course. The Lost Colony ended in utter disaster, but Virginia Dare’s memory was sacred when America rose to rule the world.

VDARE.com played absolutely no part no role in last Saturday’s Unite The Right Rally in Charlottesville Va. None of our principals were invited to speak. None of us attended. We didn’t even publicize it beforehand.

But, needless to say, none of this made the least difference. We have still been cut off from PayPal with no explanation after paying its gouging commissions for processing donations for over ten years. We have still been cancelled out of our conference by the Cheyenne Mountain Lodge (which had to pay a stiff penalty to do it), cheered on by Alt-Left Communist fellow-travelers like Sen. Michael Bennet (D.-CO).

This Totalitarian Left’s plans were already in place for when Hillary Clinton was elected—with the sole difference that “Hate Speech” legislation would then have been included (and approved by the Wise Latinas etc. she would have put on the Supreme Court). Indeed, after a long campaign by the Southern Poverty Law Center ($PLC), VDARE.com and other sites had already been dropped by Google Adsense and (apparently in our case, they won’t explain their reasons) Amazon. For example, remember (because the MSM doesn’t want you to) that just two months ago James Hodgkinson, a Bernie Sanders supporter, opened fire  on the GOP Congressional baseball team and hit four people, critically wounding House Majority Whip Steve Scalise. Hodgkinson was a supporter of the $PLC (as was Floyd Corkins, the 2013 Family Research Council shooter).

But there has been absolutely no outcry against the $PLC, Senator Sanders, the Democratic Party or above all against Hillary Clinton, whose demented refusal to accept her 2016 defeat obviously contributed to Hodgkinson’s mental imbalance.

My current favorite example: Norwegian cancels far-right group’s “Rebel Cruise” from Miami, by Chabeli Herrara, Miami Herald, August 17, 2017. Not only does the “far-right group,” Rebel Media, have no connection with Charlottesville—contributor Gavin McInnes explicitly refused to let his Proud Boys organization be involved—but it has been repeatedly attacked by some of the rally’s organizers as being “Alt-Lite” i.e. not hard-line enough. And, under president Ezra Levant (whom I know slightly), it has been ardently pro-Israel.

But it doesn’t matter. Nothing matters. This is a witch hunt.

Part of the reason witch-hunts don’t last: subsequent events—in this case, embarrassing for the Left if it were capable of embarrassment, yet another Muslim mass murder, this time in Spain.

But there’s also Narrative Collapse. In the case of Charlottesville, James Alex Fields may well be acquitted despite the MSM effort to lynch him, like George Zimmerman or Darren Wilson. The Virginia ACLU has confirmed that the police failed to protect to Unite The Right demonstrators. (In fact, they forced them from the park in defiance of a federal judge’s ruling.) A former Virginia governor, Jim Gilmore has now called for an investigation. The Virginia State Police have repudiated Governor Terry McAuliffe’s demagogic claim that the Unite The Right protestors had arms caches. Video evidence is increasingly showing that the Communist AntiFa were indeed the aggressors. CBS Leftist Jake Tapper has complained, in apparent surprise, that the Communists assaulted his journalist colleagues. 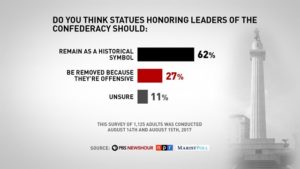 Above all, President Trump, in his uncanny intuitive way, struck back decisively in his Tuesday  press conference by calling out the violent Communist Alt Left, and the campaign against Confederate statues (“who’s next, Washington Jefferson? So foolish”). Significantly, polls now show massive public support for this last position, something impossible to guess from the MSM coverage (or the Congressional GOP panic).

The Left know this, even if the Conservativism Inc.  does not. As Bloomberg Businessweek’s Joshua Green just wrote mournfully:

Trump’s heretical position on immigration didn’t win him many friends among Republican leaders. But he made a deep connection with Republican voters. More than any other issue, Trump’s hard-line views on immigration and his vow to build “The Wall” carried him to the White House….

By standard metrics, it’s easy to chalk up Trump’s presidency as a failure.

But on the issue that transformed his political persona and drove his presidential campaign — immigration — Trump has delivered more to his supporters than he’s often given credit for… his support among Republicans, although it has weakened somewhat, remains strong. Those most fiercely loyal to Trump are the voters who care most deeply about issues like immigration. Trump’s ability to deliver for them has kept them in the fold and propped up his presidency — at least, for now.

Eighteen years after VDARE.com’s founding, 22 years after the publication of my book Alien Nation: Common Sense About America’s Immigration Disaster, 25 years after my National Review cover story from which it flowed, I view this revolution as a personal vindication. Indeed, the elite’s full-court press after Charlottesville is very similar to the freakout after the release of the Access Hollywood tapes in the last weeks of the 2016 Presidential Election, when  the entire GOP Establishment tried to dump Trump, only to crawl back after his heroic performance in the second presidential debate.

It’s true that this particular full court press features an extraordinary purge of the internet—and here I want to thank, from the bottom of my heart, our donors who have rushed to give through our backup system, no doubt suspecting that it too may be taken down.

But even here there are signs of a reaction. Thus Jeremy Carl wrote in National Review, which is otherwise cucking as frantically as ever:

If Google and Apple are banning Gab, mainstream conservatives are crazy to think they are safe….

Daily Stormer is as racist and anti-Semitic as anything I’ve ever seen on the Internet. But they also had, prominently placed on the front of their site, a statement disclaiming violence and indicating that anyone threatening violence anywhere on their site would be banned. If being vile is grounds for not being able to speak, the Internet would be a much smaller place….

Conservatives, and more importantly, Republicans in Congress, need to speak up and put a stop to the censoring, speech-stifling madness of the Silicon Valley mafia.  If we don’t stand up, even for speakers we loathe, the leftists will just increase their demands for censorship until they come to our own doorstep. If you think people who want to blow up Mount Rushmore and demolish the Jefferson Memorial are going to be happy just going after going after neo-Nazis, then I’ve got some land on the National Mall I’d love to sell you.  I think there may be some prime-location building space there soon.[ "Is This Day The Internet Dies?" August 18, 2017]

Perhaps you have to have daughters yourself to appreciate what the Lost Colony’s founder John White must have felt when he finally returned from a supply trip to England, much delayed by the  Spanish Armada. The smoke he took at first to be proof of occupation turned out to be brushfires. The settlement stood abandoned. Over a hundred settlers, his daughter and his granddaughter Virginia Dare among them, had vanished. He would never see them again.

As he stood there desolated, on the edge of a vast unknown continent, nothing like Cowper’s verse could ever have occurred to him:

Thy posterity shall sway;

Where his eagles never flew,

None invincible as they

But it happened. And that’s something we must celebrate, and defend.