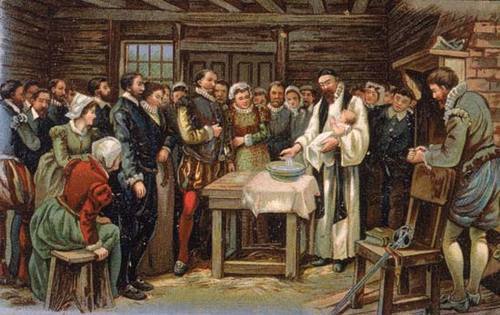 On Virginia Dare’s Birthday: Will Her Fate Be The Fate Of America?

Virginia Dare, after whom VDARE.com is named, was born exactly 435 years ago, on August 18, 1587. On the right is an idealized picture of her by 19th century artist J. L. G. Ferris.

“While Jaycee Lee Dugard has been reunited with her family after being abducted 18 years ago, plenty of disappearances remain unexplained.”

So said Time Magazine when it put Virginia Dare on its 2009 list of Top 10 Famous Disappearances.

As Peter Brimelow wrote on our Why VDARE.com page:

“I have always been fascinated by the story of Virginia Dare. She was the first English child to be born in the New World, in August 1587, shortly after the founding of what was to become known as "The Lost Colony" on Roanoke Island off the North Carolina coast. It says something about the mettle of those settlers that any pregnant woman would cross the Atlantic, the equivalent of a lunar expedition at that time—and Virginia’s mother Elenor was no less than the daughter of John White, the colony’s governor.

Perhaps you have to have a daughter yourself to appreciate what White must have felt three years later, when he finally returned from a supply trip to England, much delayed by the  Spanish Armada. The smoke he took at first to be proof of occupation turned out to be brushfires. The settlement stood abandoned. Over a hundred settlers, his daughter and granddaughter among them, had vanished. He would never see them again. “

We still don’t know happened to Virginia Dare, or any of the others.

But TIME’s Jaycee Dugard reference reminds us of what could have happened to her.

Jaycee Dugard was kidnapped by Philip Garrido, a California Hispanic sex offender, when she was 11, and held prisoner for 18 years. During her captivity she bore two daughters, who were 11 and 15 at the time of her reappearance. [Kidnapping of Jaycee Lee Dugard, Wikipedia, August 17, 2012]

Something like that may have happened to Virginia Dare. That is, even if all the adults were killed, she may have been kept and raised by an Indian tribe, and even had children. She may have descendants living on the North American continent now.

Virginia Dare is thought to have eventually married into a local Indian tribe, or to have been killed by it—almost equally unfortunate possibilities in the minds of VDARE's writers, who make no secret of their concern about the way America's original Anglo-Saxon stock is being transformed by immigration.

[Too Many Immigrants?, Commentary Magazine, April 2002]

Of course, this is an absurd caricature, no doubt a projection of Jacoby’s own preoccupations. At the time, Peter Brimelow and I replied:

If VDARE.com did champion what David Hackett Fisher called "Albion's Seed" in this way, it would, after all, merely make us the Commentary magazine of the "Anglo-Saxon" minority.

Later, in 2006, I pointed out the comparison with the movie The Searchers, with  John Wayne as Ethan Edwards, a Confederate veteran and Indian fighter who spends years looking for his niece, kidnapped by Indians, and eventually “marrying” into the tribe.

I suggested that Jacoby was confusing VDARE.com’s editorial collective with

“the John Wayne character, Ethan Edwards, in The Searchers, who really hates Indians, and thinks that his niece, after years of living with the Comanche, may be better off dead…

But really, though all we have is legends, we're talking about a girl who hasn't been seen alive since she was three. Why wouldn't we be horrified at the idea of a girl being kidnapped at the age of three from a civilized family and raised by an Indian tribe? Why wasn't Tamar Jacoby horrified by that?”

Well, I can only suppose it’s because, while our grandparents may have had a horror of “miscegenation”, today we have a horror of having a horror of it.

It seems that, even if it’s case of a girl lost and abandoned in the wilderness, it would be wrong to think that it was bad for her to be married—under the circumstance perhaps I should say “owned by”—an Indian.

It’s a standard threat from black activists and white anti-racists, though.

For example, black lawblogger Elie Mystal [Email him] on the Above The Law Blog writes:

Man claims it’s against his “creed” to allow black people to bag his groceries. I sure hope this guy has kids because I want to find out how his religion feels about black people bagging his daughter.

Jared Taylor has written that

For my own family, as I once put it, I want my children to look like their grandparents, not like Anwar Sadat or Whoopi Goldberg or Fu Manchu.

If Virginia Dare lived, her own great-great-great grandchildren may possibly be members of North Carolina’s Lumbee tribe, who seem to be what are called “tri-racial isolates” of mixed white, Indian, and African-American descent.

Which means, that because of blending, they might look like Heather Locklear, one the best-known (and best-looking) Lumbee Indians in America.

But what about the future? Today’s children face an America where they will once again be a white minority.

What’s going to happen to the new Virginia Dares—and are we even allowed to worry?

I don’t know, but that’s why we’re here—in the hopes that the historic America can be preserved.

That’s the ultimate answer to the question: “Why VDARE?”