Ken At PopeHat To VDARE.com: "Die Slowly Of Cancer."

Here's blogger Ken At Popehat responding to the latest threat to our freedom of speech (PayPal shutting us down, that is)

From: Ken At Popehat [mailto:ken@popehat.com]

Ken at Popehat is, in real life "Los Angeles’ Ken White, a criminal defense lawyer with Brown, White & Newhouse." (Not a secret—he de-anonymized himself years ago.) [Popehat unmasked : For a good cause, LexBlog, December 30, 2011] He's also a powerful, influential member of the Blogosphere, and generally something of a free-speech absolutist:

This weekend the hypotheticals about how far the Alt-Right might go collapsed into a grim reality. Literal Nazis marched the streets of an American city, calling out Jews and blacks and gays, wielding everything from torches to clubs and shields to rifles, offering Nazi slogans and Nazi salutes. Some of their number attacked counter-protesters, and one of them murdered a counter-protester and attempted to murder many others. This is the "what if" and "how far" that critics of vigorous free speech policies pose to us as a society.

So, too, has the malevolent government we fear come to pass. We have a President elected on a platform of denouncing the press, "investigating" protest movements, and "opening up" libel laws (however little he can actually do so). We have an administration and its powerful, megaphone-equipped sycophants who define entire diverse protest groups — Black Lives Matter, as one example — by the violent actions or rhetoric of a tiny fraction of their members, and suggest that the state should treat the whole based on that part. (This, ironically, is exactly what the Nazis are now complaining that people are doing.) [America At The End of All Hypotheticals, PopeHat, August 14, 2017] 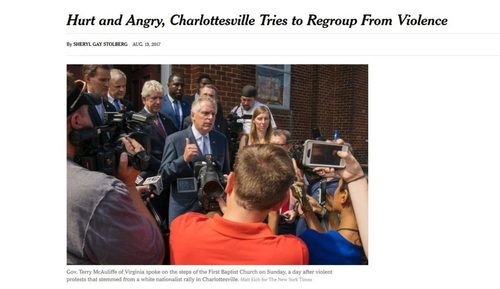 As far as I can tell, his description of the events at Charlottesville is simply a pack of lies—not his lies, but the media's. (Towards which he is being somewhat credulous, for a defense lawyer, of course, but people believe what they want to believe.) The UniteTheRight marchers were trying to have (a) a torchlight parade, and (b) a rally with speeches. That's why the New York Times described the events as "violent protests that stemmed from" the  rally, rather than a violent rally.

A brief word about the torchlight parade, much mocked because they were using tiki torches—which in this context means "fire safety".  Torchlight parades are an American tradition—during the dark days of World War II, when there were real Nazis and Fascists to fight, a torchlight parade greeted the re-election of...Franklin Delano Roosevelt. [Remarks to the Torchlight Paraders on Election Night. Hyde Park, New York. November 7, 1944] It was reenacted at Hyde Park last year.

None of these torches were used to set anything on fire—unlike what happened during Black Lives Matters riots in Ferguson and Baltimore.

The rightists behaved themselves, and were the victims of attacks by anti-fascists, who were assisted by the Governor and the local police. But Ken at Popehat doesn't want to believe that.

One further Ken note—he denies having purged ClarkHat, below, but if you read the denial, it contains a lot of hatred for people like you and me: 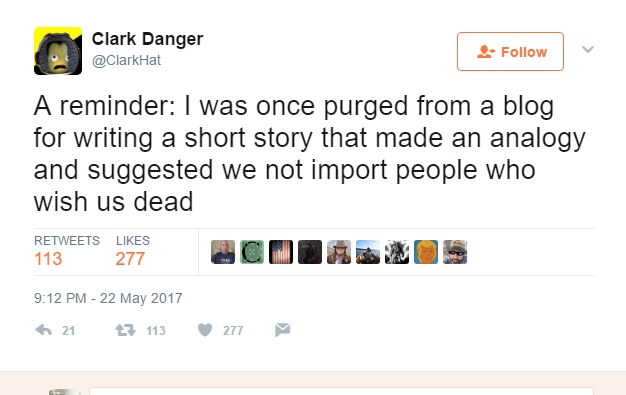 But the real reason he's not going to go through the whole public disgrace, losing job, etc. thing that people like us go through is because here he's on the side of the powerful, not the powerless.