Whatever the outcome of the “Comprehensive Immigration Reform” a.k.a. Amnesty/ Immigration Surge battle in Congress, Conservatism Inc. has already lost. The only way the Beltway Right could get the immigration issue “behind” it is if there were no debate within the conservative movement in the country. But the conservative grassroots have decisively turned against Rubio, McCain, Graham, and their collaborators.

And so Conservatism Inc. has turned against the grassroots.

The Daily Caller’s Matt Lewis [Email him] epitomized Conservatism Inc.’s hatred of its own voters in his most recent diatribe “Exposing anti-immigration reform motives and canards” [July 20, 2013 ] Lewis, who earlier distinguished himself by his eagerness to purge the “indefensible” John Derbyshire, follows the usual Beltway Right pattern of deciding his opinion on an issue by whether or not it will lead to Leftists calling him names. 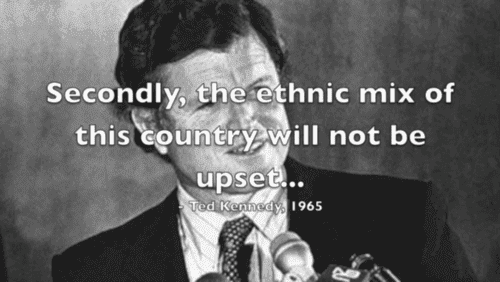 Attacking some of the grassroots videos made in response to Mickey Kaus’ mischievous suggestion, Lewis claims that immigration patriotism is discredited because Amnesty opponents believe that the historic American nation should be preserved. He thinks that highlighting this lying promise by Teddy Kennedy at the time of the disastrous 1965 Immigration Act must be a case of gross nativism (if not neo-Nazism):

Lewis sneers that he “doesn't care what Ted Kennedy said in 1965” and preens that he “couldn't care less about preserving the 'ethnic mix' of America. “

Instead, he triumphantly offers the tired bromide that America isn't about a culture or people but about “ideas.”

Lewis writes: “As long as America is free and virtuous, honors the rule of law, and advances the values of Western Civilization, why does ethnicity matter?”

But of course, America currently does none of those things—and mass immigration is a major reason why.

Beyond Lewis's characteristic Conservatism Inc. blindness, he has two larger points. The first part of Lewis’ case is perhaps the defining characteristic of Conservatism Inc. ideology (or, more properly, rationalization): the insistence that there is an American Creed which can (and must) absorb all the peoples of the world, as America itself has no independent identity. This belief is simultaneously supremacist and egalitarian, condescending and weak, imperialist and defeatist. It is best summarized by the famous quotation of the Colonel from the Vietnam War film  Full Metal Jacket: “Inside every gook, there is an American trying to get out.”

However, in an age of multiculturalism, cringing Conservatism Inc. types combine this messianic self-abnegation with explicit condemnation of the American Founding Stock. Thus Lewis gloats: “whites have stopped having babies. (So get to it!)” This is a variation on Jeb Bush's theme that immigrants are simply stronger, more fertile, and, in a word, more “vibrant” than the deservedly dying American whites.

This contempt for white Americans even manifests itself in a kind of weird inverted racial mysticism that would fit elegantly in any issue of the Das Schwarze Korps. While Jeb Bush waxes eloquently about the vibrant Latinos and their bambinos, Senator John McCain opines, in a speech to the Congressional Hispanic Leadership Institute,  that “anyone who is afraid that somehow our culture will be anything but enriched by fresh blood and culture, in my view, has a distorted view of history and has a pessimistic view of our future.” [Potential Foes in '08 See Eye to Eye on Illegal Immigration, CNS News, July 7, 2008]

Of course race is an important part of the immigration debate—but not in the way Lewis would have us believe. Patriotic immigration reformers typically base their arguments only on economics, crime, health care, and culture. But the Treason Lobby Establishment—Left and Right—is remarkably blunt in praising white racial dispossession. Overtly racialist organizations like the National Council of La Raza are adoringly fawned on by the likes of Graham and McCain.

And if someone even implies that whites constitute a real group with real interests, PC enforcers like Lewis seize on the comment as proof of the evils of immigration patriotism.

Lewis's mockery of declining white birth rates ignores the fact that the historic American nation is being driven to extinction, rather than choosing it. Even leaving aside the cultural assaults of feminism, multiculturalism, and attacks on the traditional family, Americans are simply finding it ever more difficult to afford to have children. And partly this is because they are expected to subsidize their own dispossession through income transfer programs that allow blacks, Hispanics and immigrants to increase their own numbers.

In those parts of the country where quality schools, low real estate prices, and low diversity allow whites to build communities, the Republican Party has found its greatest success. But rather than pursue what Steve Sailer has called “affordable family formation,” Lewis wants to accelerate the economic war on whites through the Amnesty/ Immigration Surge bill—although this would also destroy the Republican Party.

Moreover, Lewis smears concerns about class inequality as coming purely “from the Left”—but he is oddly sanguine about how mass immigration creates an ever-growing class of government dependents.

And this is the fundamental contradiction of the “creedal nation” heresy. Just as Lewis's own Daily Caller is implicitly reliant on race-baiting even as it officially denies whites' right to exist, Conservatism Inc. defines “Americanism” as a colorblind creed of ideas—which, in reality, only whites share.

If “real conservatism” is to be defined as an abstract belief in limited government, free markets, and traditional values, Hispanics have no place. Neither do African-Americans. More than that, neither do millions of American whites.

In the quest to appear “tolerant” and thus respectable, Conservatism Inc. created a definition of Americanism far more exclusionary than anything concocted by the “racist” Dissident Right.

But of course, the ideas don't really matter. The second string intellectuals of the Beltway Right aren't actually supposed to win. The debate over Amnesty shows that Conservatism Inc. has succeeded in becoming the caricature that Marxist professors and liberal reporters have long denounced. It is a merely a corporate lobbying firm that uses soaring rhetoric about freedom, liberty, or “limited government” to mask a single-minded agenda of transferring wealth from the traditional American nation to a post-American elite.

Issues such as gay marriage, patriotism, or faux indignation about the “honor” of a long dead Republic are simply distractions to trick the rubes into voting against their own interests. Publicists like Lewis and other Beltway hacks are simply the less-competent lobbyists—the servants of capital aren’t worth  the salaries   of the skillful sell-outs who staff K Street.

Of course, even within the crumbling edifice of Conservatism Inc., there are signs of hope. The comment thread on Lewis's article is dominated by outraged readers accusing him of being a “traitor.”

But a traitor to whom? Not to the embarrassingly facile ideology of the Beltway Right—of that self-defeating creed, Lewis is a faithful steward.

What these grassroots patriots sense, but don't necessarily have the vocabulary to define, is that mass immigration is not an attack on abstractions, but on the existence of Americans as a people.

If America is to survive as a meaningful entity, mass immigration must be ended—regardless of whether the Beltway Right, and its corporate sponsors, permit it.

Treason to Conservatism Inc. is loyalty to America—and to the people who created her.

Post
Why Is Nobody, Other Than Steve Sailer's Commenters, Suggesting That Simone Biles Was Stressed By Her Brother's Recent Triple Murder Trial?
MORE...
POPULAR TAGS