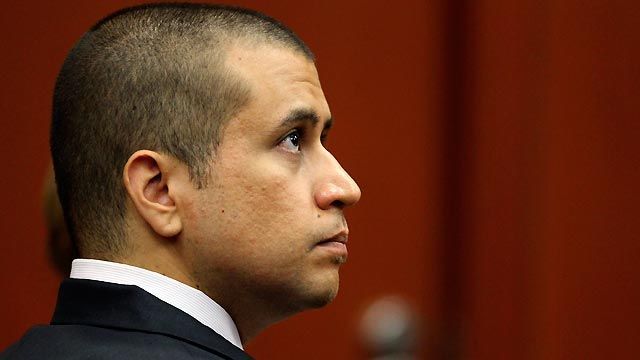 The New York Post runs a long Reuters article on George Zimmerman full of valuable information. Here's a minor bit that answers one question that struck me: Whereas he looked quite mestizo in the notorious orange shirt photo, why, lately, does a skinnier, shaven-headed, suited Zimmerman look a bit like the President?

The 28-year-old insurance-fraud investigator comes from a deeply Catholic background and was taught in his early years to do right by those less fortunate. He was raised in a racially integrated household and himself has black roots through an Afro-Peruvian great-grandfather - the father of the maternal grandmother who helped raise him.

So, he's not just a mestizo, he's a "pardo," like Hugo Chavez calls himself.

A criminal justice student who aspired to become a judge, Zimmerman also concerned himself with the safety of his neighbors after a series of break-ins committed by young African-American men.

Though civil rights demonstrators have argued Zimmerman should not have prejudged Martin, one black neighbor of the Zimmermans said recent history should be taken into account.

"Let's talk about the elephant in the room. I'm black, OK?" the woman said, declining to be identified because she anticipated backlash due to her race. She leaned in to look a reporter directly in the eyes. "There were black boys robbing houses in this neighborhood," she said. "That's why George was suspicious of Trayvon Martin."

George Michael Zimmerman was born in 1983 to Robert and Gladys Zimmerman, the third of four children. Robert Zimmerman Sr. was a U.S. Army veteran who served in Vietnam in 1970, and was stationed at Fort Myer in Arlington, Virginia, in 1975 with Gladys Mesa's brother George. Zimmerman Sr. also served two tours in Korea, and spent the final 10 years of his 22-year military career in the Pentagon, working for the Department of Defense, a family member said.

In his final years in Virginia before retiring to Florida, Robert Zimmerman served as a magistrate in Fairfax County's 19th Judicial District.

Robert and Gladys met in January 1975, when George Mesa brought along his army buddy to his sister's birthday party. She was visiting from Peru, on vacation from her job there as a physical education teacher. Robert was a Baptist, Gladys was Catholic. They soon married, in a Catholic ceremony in Alexandria, and moved to nearby Manassas.

Gladys came to lead a small but growing Catholic Hispanic enclave within the All Saints Catholic Church parish in the late 1970s, where she was involved in the church's outreach programs. Gladys would bring young George along with her on "home visits" to poor families, said a family friend, Teresa Post.

"It was part of their upbringing to know that there are people in need, people more in need than themselves," said Post, a Peruvian immigrant who lived with the Zimmermans for a time.

Post recalls evening prayers before dinner in the ethnically diverse Zimmerman household, which included siblings Robert Jr., Grace, and Dawn. "It wasn't only white or only Hispanic or only black - it was mixed," she said. ....

"They were part of the household for years, until they were old enough to be on their own," Post said.

Zimmerman served as an altar boy at All Saints from age 7 to 17, church members said.

"He wasn't the type where, you know, 'I'm being forced to do this,' and a dragging-his-feet Catholic," said Sandra Vega, who went to high school with George and his siblings. "He was an altar boy for years, and then worked in the rectory too. He has a really good heart."

George grew up bilingual, and by age 10 he was often called to the Haydon Elementary School principal's office to act as a translator between administrators and immigrant parents. At 14 he became obsessed with becoming a Marine, a relative said, joining the after-school ROTC program at Grace E. Metz Middle School and polishing his boots by night. At 15, he worked three part-time jobs - in a Mexican restaurant, for the rectory, and washing cars - on nights and weekends, to save up for a car. ...

In 2004, Zimmerman partnered with an African-American friend and opened up an Allstate insurance satellite office, Donnelly said.

Then came 2005, and a series of troubles. Zimmerman's business failed, he was arrested, and he broke off an engagement with a woman who filed a restraining order against him. ...

Zimmerman enrolled in Seminole State College in 2009, and in December 2011 he was permitted to participate in a school graduation ceremony, despite being a course credit shy of his associate's degree in criminal justice. Zimmerman was completing that course credit when the shooting occurred. ...

By the summer of 2011, Twin Lakes was experiencing a rash of burglaries and break-ins. Previously a family-friendly, first-time homeowner community, it was devastated by the recession that hit the Florida housing market, and transient renters began to occupy some of the 263 town houses in the complex. Vandalism and occasional drug activity were reported, and home values plunged. One resident who bought his home in 2006 for $250,000 said it was worth $80,000 today.

At least eight burglaries were reported within Twin Lakes in the 14 months prior to the Trayvon Martin shooting, according to the Sanford Police Department. Yet in a series of interviews, Twin Lakes residents said dozens of reports of attempted break-ins and would-be burglars casing homes had created an atmosphere of growing fear in the neighborhood.

In several of the incidents, witnesses identified the suspects to police as young black men. Twin Lakes is about 50 percent white, with an African-American and Hispanic population of about 20 percent each, roughly similar to the surrounding city of Sanford, according to U.S. Census data.

One morning in July 2011, a black teenager walked up to Zimmerman's front porch and stole a bicycle, neighbors told Reuters. A police report was taken, though the bicycle was not recovered. ...

But it was the August incursion into the home of Olivia Bertalan that really troubled the neighborhood, particularly Zimmerman. Shellie was home most days, taking online courses towards certification as a registered nurse.

On August 3, Bertalan was at home with her infant son while her husband, Michael, was at work. She watched from a downstairs window, she said, as two black men repeatedly rang her doorbell and then entered through a sliding door at the back of the house. She ran upstairs, locked herself inside the boy's bedroom, and called a police dispatcher, whispering frantically.

"I said, 'What am I supposed to do? I hear them coming up the stairs!'" she told Reuters. Bertalan tried to coo her crying child into silence and armed herself with a pair of rusty scissors.

Police arrived just as the burglars - who had been trying to disconnect the couple's television - fled out a back door. Shellie Zimmerman saw a black male teen running through her backyard and reported it to police.

After police left Bertalan, George Zimmerman arrived at the front door in a shirt and tie, she said. He gave her his contact numbers on an index card and invited her to visit his wife if she ever felt unsafe. He returned later and gave her a stronger lock to bolster the sliding door that had been forced open.

"He was so mellow and calm, very helpful and very, very sweet," she said last week. "We didn't really know George at first, but after the break-in we talked to him on a daily basis. People were freaked out. It wasn't just George calling police ... we were calling police at least once a week."

In September, a group of neighbors including Zimmerman approached the homeowners association with their concerns, she said. Zimmerman was asked to head up a new neighborhood watch. He agreed. ...

Less than two weeks later, another Twin Lakes home was burglarized, police reports show. Two weeks after that, a home under construction was vandalized.

The Retreat at Twin Lakes e-newsletter for February 2012 noted: "The Sanford PD has announced an increased patrol within our neighborhood ... during peak crime hours.

"If you've been a victim of a crime in the community, after calling police, please contact our captain, George Zimmerman."

On February 2, 2012, Zimmerman placed a call to Sanford police after spotting a young black man he recognized peering into the windows of a neighbor's empty home, according to several friends and neighbors.

"I don't know what he's doing. I don't want to approach him, personally," Zimmerman said in the call, which was recorded. The dispatcher advised him that a patrol car was on the way. By the time police arrived, according to the dispatch report, the suspect had fled.

On February 6, the home of another Twin Lakes resident, Tatiana Demeacis, was burglarized. Two roofers working directly across the street said they saw two African-American men lingering in the yard at the time of the break-in. A new laptop and some gold jewelry were stolen. One of the roofers called police the next day after spotting one of the suspects among a group of male teenagers, three black and one white, on bicycles.

Police found Demeacis's laptop in the backpack of 18-year-old Emmanuel Burgess, police reports show, and charged him with dealing in stolen property. Burgess was the same man Zimmerman had spotted on February 2.

And there's much else, such as why Zimmerman bought a gun.

Here's a question: Whom would you rather have as a neighbor: George Zimmerman or Trayvon Martin?

The overall picture that has finally emerged is the opposite of the Prestige Press's narrative: while an occasional screw-up, Zimmerman was way above average in altruism and pro-social activity, while Martin was increasingly seduced toward the dark side by hip-hop culture: apparently involved in burglary of jewelry.

On the other hand, let me point out that Trayvon's trajectory through age 17 didn't inevitably doom him to a life in and out of prison: three school suspensions of increasing severity and an unproven but probable suspicion of burglary or fencing burgled goods is pretty bad.  But if he'd had the same track record at 15, his chance of pulling out and getting back on the straight and narrow would seem far worse. As of 17, he didn't appear to belong to an organized street gang, which strikes me as key. My impression is that the appeal of joining a criminal gang starts to diminish pretty rapidly in the late teen years, so the key for his life would likely have been staying out of trouble enough to graduate from high school. His parents had some resources to move him around to get him away from the bad influences he was hanging out with in Miami. In general, he comes across as a classic victim of hip-hop, the kind of kid who would have been okay if pop culture wasn't constantly telling him to act like a thug.