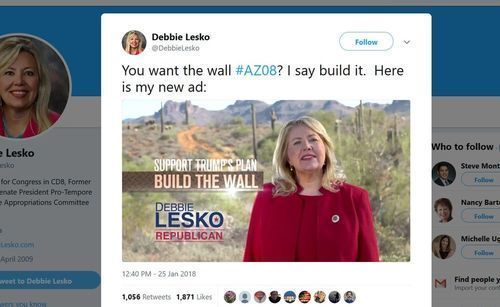 At least one Trump Effect is still working: When Republican candidates want to win, they champion immigration patriotism. Thus, in a special election Democrats were hoping to win, Republican candidate Debbie Lesko held off a strong challenge by explicitly supporting President Donald Trump’s wall on the Mexican border.

You want the wall #AZ08? I say build it. Here is my new ad: pic.twitter.com/Gz9ZtSErxi

Mann Stream Media gloating that Republicans are sure to lose the House is overheated, As even Slate admits, special elections take place in an atmosphere far different than national elections [How far ahead are Democrats, really? By Josh Voorhees, April 25, 2018]. Still, the GOP—which by default means the GAP, Generic American Party—is clearly in trouble. If only to save their own jobs, every elected Republican should be acting with a sense of urgency.

But instead, Republicans, or at least the Congressional leadership, seem to be utterly complacent, believing the economy and the tax cut will allow them to keep their posts. Of course, some Paul Ryan/ Jack Kempites may well be stupid enough to believe this. But while polls show majority of voters accept the GOP is better at handling the economy, a majority also disapprove of the tax cut, the sole major accomplishment of united Republican government [Poll finds Republican tax cut remains unpopular, MarketWatch, April 16, 2018]. Speaker Paul Ryan doesn’t seem to have much of an agenda for his remaining time in Congress—incredibly, aside from making the unpopular tax cuts permanent, the GOP Congress is focusing on further easing banking regulations. [GOP Congress Has A Modest To-Do List Before Polarized Midterms, by Anna Edgerton, Bloomberg, April 23, 2018]

So after one of the most gut-wrenching, hard fought campaigns in political history, the GOP Establishment took the priceless gift of united government control, a president who owed his election to no one, and the prospect of a wholesale political realignment and…governed as if they were trying to confirm the Left’s caricature of them as water carriers for the rich corporate elite.

No wonder outright socialists are rising in popularity. [“Yes, I’m running as a socialist.” Why candidates are embracing the label in 2018, by Farah Stockman, Atlanta Journal-Constitution, April 23, 2018] As Steve Bannon warned, there is either going to be a right-populism or a radical movement of the Left that will determine the future. [Bannon predicts turmoil and more right-wing populist success in Europe, by Clare O’Dea, Irish Times, March 8, 2018]

How did the GOP Establishment manage to blow this? Of course, part of the fault lies with President Trump himself. Yet more lies with the degenerate intellectual infrastructure of Conservatism Inc. Trump made the (possibly fatal) mistake of working with Conservatism Inc. in good faith, especially by making health care reform his first main legislative push. Incredibly, it turned out no one in the Republican Party or Conservatism Inc. had a plan to actually replace Obamacare, despite years of campaigning on it.

The second and more successful legislative push, to cut taxes, is something no different than a Republican would have done 30 years ago.

It is also absolutely clear that no one in the Conservatism Establishment has thought critically about what a comprehensive populist/nationalist agenda would look like. There’s an obvious reason for this: anyone who could come up with such an agenda would have been purged from Conservatism Inc. many years ago. (We’ve been writing about it at VDARE.com for years—some of us after being purged.)

Thus, almost the only political professionals on the American Right President Trump could turn to after his victory were the same people he had just defeated.

For example, the Koch Brothers network is bragging about its success in affecting policy, naturally drawing hostile attention from the Left [Koch network success in Trump era draws Democratic pushback, by Lisa Mascaro, AP, April 23, 2018]. Yet even as the Left is energized by this, the Koch brothers are pressuring Republicans to take the suicidal step of passing amnesty just before the midterm elections [Pro-Mass Immigration Koch Brothers Threaten GOP: Pass Amnesty For Illegal Aliens Or Lose Funding In Midterms, by John Binder, Breitbart, April 24, 2018]

Although President Trump has done his best to push for the traditional Republican agenda, the Republican Establishment has not returned the favor and co-operated on Trump’s own agenda. They have not funded the border wall, nor have they taken up immigration legislation he has specifically and repeatedly called for. Thus Matt Glassman at National Review smirks that “not one major piece of legislation has been taken up that ideologically reflects Trumpism rather than Republican orthodoxy” [How Congressional Republicans Have Neutered the Trump Agenda, April 25, 2018].

Glassman argues many of President Trump’s backers are committed to protecting him personally, rather than his policies. Unfortunately, President Trump appears to believe the same thing. The result is a worst-of-both-worlds situation for National Conservatives.

The true lesson of 2016 is not that Donald Trump is a master politician, it’s that a reality show star was able to beat the entire Republican field because he took up important issues, especially immigration, that the GOP Establishment refused to confront—and still refuses to confront.

It’s because Candidate Trump was “taking on the system” that he was able to get away with so much. During the campaign, Donald Trump’s personal foibles were turned into strengths. He was going to destroy the political establishment of both parties, “drain the swamp,” and reorient America’s trade, immigration and foreign policies. When the entire Republican Party threatened to abandon him after the bawdy Access Hollywood tapes came to light, then candidate Trump delivered the most fiery speech of his campaign, slamming a “Washington Establishment and the financial and media corporations” that exist only to enrich themselves. [Transcript: Donald Trump’s Speech Responding To Assault Accusations, NPR, October 13, 2016]

But the same shameless, damn-the-torpedoes approach doesn’t work when he is pushing tax cuts so that Hollywood celebrities have more money to advocate for gun control.

Still, even utterly conventional Republicans like Reince Priebus now at least pay lips service to the idea that traditional Republicanism has to make a working-class appeal in order to win [Reince Priebus: GOP will revert to old ways after Trump, by Paul Bedard, Washington Examiner, April 15, 2018]. Y

And Preibus is fooling himself about the GOP simply going back to the status quo ante bellum. While he no doubt thinks it’s just a question of marketing, the truth is that important issues like the National Question are not going away. Nor is the GOP imperative of gaining a greater share of the white vote going to disappear anytime soon. Out of sheer self-preservation, more Trump-like candidates will soon emerge.

One may be Ted Cruz, who, by the end of the primaries was flanking Trump on his right when it came to immigration. Today, Ted Cruz is championing his opposition to Sanctuary Cities in his tough re-election fight [Ted Cruz rails against Obamacare, ‘sanctuary cities’ before Austin crowd, by Robert Garrett, Dallas News, April 3, 2018].

Reporters are also taking note of Cruz championing his “unyielding opposition to illegal immigration” and his strategy of inreach to his base. [Although now an insider, Ted Cruz campaigns like an outsider in Texas Senate race, by John C. Moritz, USA Today Network, April 25, 2018]

Liberal Dems — like Hillary and @BetoORourke — say anyone who wants to secure the border and end sanctuary cities must be a bigot and “hate Mexicans.” That’s a nasty insult directed at millions of Texans who welcome legal immigrants (like my Dad), but also respect rule of law. https://t.co/FO4Xv89EZF

The Congressional GOP may pay the price for its complacency, though the midterms are still months away and a lot can happen before then. And even Donald Trump does not appear to understand what he set in motion.

But it’s already clear that traditional Republicanism, while popular in the Beltway and among the donor class, simply does not have the constituency to deliver political victory.

There aren’t enough bankers to win a presidential election. But there are enough voters who want to hear a populist message.

And if President Trump doesn’t deliver for them, some ambitious future candidate will—regardless of what Conservatism Inc. has to say about it.