The victory of “Blue Dog” Conor Lamb over Republican Rick Saccone in the Pennsylvania District 18 special election seems to suggest the Democrats have a strategy to win back a congressional majority. By soft-pedaling cultural issues and emphasizing economic populism (except, of course, for immigration), they could possibly reclaim the Rust Belt whites that Donald Trump so brilliantly won over. Unfortunately for the Democrats, however, they have become a Coalition of the Fringes united around hatred of whites and of traditional American culture, and their base will not tolerate candidates like Lamb. Symptomatically, even as Democrats trumpeting Lamb’s victory, the party machine is undermining one of the last remaining “Blue Dog” Democrats: Dan Lipinski (IL-3) in his March 20 primary.

The pro-life Lipinski is being challenged by leftist Marie Newman, who has the backing of Obama’s political operatives as well as the endorsement of Bernie Sanders [Conservative Democrat Rep. Lipinski struggles to fend off progressive primary challenge, by Aamer Madhani, USA Today, March 17, 2018].  Lipinski is supported by traditional Democratic powers like the American Federation of State, County, and Municipal Employees and the AFL-CIO But Newman is reportedly within only two points of winning [Poll: Lipinski holds slim lead over progressive primary challenger, by Lisa Hagen, The Hill, March 6, 2018].

Note that, disgracefully, the Democrats are sure to win the general election in this 74% white district: the typically incompetent GOP didn’t bother to recruit a good candidate. The only person running in the GOP primary is Art Jones, a political gadfly whose main issue is arguing about whether the Holocaust happened—probably not a hot issue in IL-3. (Similarly incompetent, although not even close to the Art Jones situation, the GOP lost in PA-18 partially because GOP Secretary of State Kim Ward told her voters to support the weaker candidate, Saccone, for petty personal reasons. [One woman you should blame for the GOP special election loss in Pennsylvania, by Ryan Girdusky, Washington Examiner, March 16, 2018])

The leadership of the Democratic party is backing Blue Dogs and conservative Democrats report they are working closely with the Democratic Congressional Campaign Committee—with the notable exception of the DCCC’s refusal to endorse Lipinski—for the first time in years. [Inside the Democrats’ efforts to elect more Conor Lambs, by Deirdre Walsh, CNN, March 18, 2018]

But at the same time, the grassroots Leftist groups that have spring up since President Trump’s election are intensifying their war on the party’s Establishment, with Leftist publications such as The Nation telling people not to donate to the DCCC [Why Can’t The DCCC And The Resistance Get Along? By Bill Scher, Politico, March 7, 2018]. Even the hero of PA, Conor Lamb, is already getting heat from Leftist publications like Slate for not being pro-abortion enough. [Democrats’ Abortion Problem, by Christina Cauterucci, Slate, March 15, 2018] One wonders if he’ll face a primary (he was chosen by a convention in 2018). 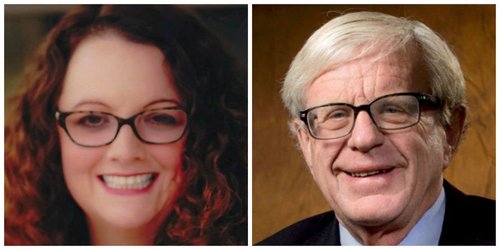 And of course the Democrats’ problem has identity politics undertones. Thus in Nebraska’s 2nd District, former Congressman Brad Ashford is being backed by Blue Dogs and is facing a challenge from leftist Kara Eastman. The leader of the Progressive Change Campaign Committee, Adam Green, has smeared Ashford as an “old white male”. [Democrats’ civil war flares after Lamb’s upset win, by Heather Caygle, Politico, March 15, 2018]

Some Republicans are complacently telling themselves that PA-18’s Lamb won because he ran as a Republican-lite. But this misses the point. As Dave Weigel noted, Lamb focused his fire not against President Trump but against the tax cuts and Paul Ryan’s promises of entitlement cuts. [No, Conor Lamb didn’t run as ‘Republican-lite,’ Washington Post, March 15, 2018] Exit polls show Lamb won because, even in this Republican district, voters did not want Obamacare repealed [Exit poll of PA-18 shows Lamb won big on health care, Public Policy Polling, March 14, 2018].

In other words, it was the conventional Ryanesque Republican platform which went down to defeat—not President Trump.

Nor was Saccone simply out-campaigned. He has been faulted for being a poor fundraiser, but outside conservative groups spent millions of dollars in the election. [GOP, conservative groups have spent $10 million-plus on the PA-18 special election, by David Wright, CNN, March 13, 2018] Saccone simply dropped the ball on policy. Lamb—significantly, given his general attempt to appear moderate—supported the most extreme position on Amnesty, concealing it with vague mutterings about Christian religiosity. But Saccone never made immigration an issue in the campaign.

President Trump is certainly a factor. Much as in 2016 the tensions within the Republican coalition were largely subsumed under the larger goal of defeating the hated Hillary Clinton, the Democrats are currently united by fury against Trump. A common enemy allowed Democrats to keep a coalition of suburban voters and working class voters together. [Who Really Won PA 18? By Lara Putnam, Democracy, March 15, 2018]

But it’s easy to do this in a 96% white district like PA-18. It’s far harder to do this in more diverse districts. It will be practically impossible to do it during presidential primaries. The racial tensions within the Democrats are likely to come to the fore in the runup to 2020.

For example, Joe Biden is reportedly going to run for president. He could on paper prove a formidable opponent for Donald Trump. In his recent campaigning for Conor Lamb, Biden portrayed himself as a friend of union workers [Joe Biden campaigns with Democrat Conor Lamb in Pa. Special election, by Arlette Saenz, ABC News, March 7, 2018] . His “populism” is phony, of course: Biden favors foreign interventionism, mass immigration and neoliberal economics [Joe Biden positions himself as the “anti-Bernie,” by James Carden, The Nation, November 6, 2017]. But Biden’s bigger problem: much of the Democrat base now simply won’t vote for a straight white male.

Even Bernie Sanders had a hard time winning voters of color in the 2016 primaries. In 2020, a candidate of color like Kamala Harris or Cory Booker is not simply going to step aside for someone like Sanders or Biden. And it’s easy to imagine the gaffe-prone Biden saying something insensitive about it [2020 Dems staff up, by Gabriel Debenedetti, Politico, March 18, 2018].

Thus the Democrats are more divided than they appear right now. But the Republicans are still poised to lose the House—as long as they continue to take for granted that GOP voters are going to turn out in the kinds of numbers they did in 2016 [Democrats hold double-digit lead for 2018 midterm elections, by Mark Murray, NBC News, March 18, 2018]. Incredibly, the Congressional GOP seems to think the answer is more tax cuts, and they appear to have persuaded President Trump, at least for now [GOP pushes for ‘phase two’ of tax cuts, by Naomi Jagoda, The Hill, March 18, 2016].

But Americans don’t want more business as usual corporate Republicanism. President Trump ran on immigration patriotism, economic populism and civic nationalism. With the exception of the recent tariffs, and arguably enhanced immigration enforcement, there has been little achieved on any of these fronts except rhetoric.

The Democrats are less a political party than a coalition of mutually hostile tribes. The GOP/ GAP (Generic American Party) should focus on splitting them apart—above all by making an explicit appeal to the white working class.

But the Congressional GOP is more interested in pushing through donor-driven policies like bank deregulation than protecting and expanding their 2016 coalition. [Senate passes bank deregulation bill, House may seek additions, by Doug Sword, Roll Call, March 15, 2018]

If the divided Democrats triumph in 2018, it’s not because they crafted a winning political strategy.

It’s because the GOP never wanted to win—except in their post-political lobbying careers on K Street.