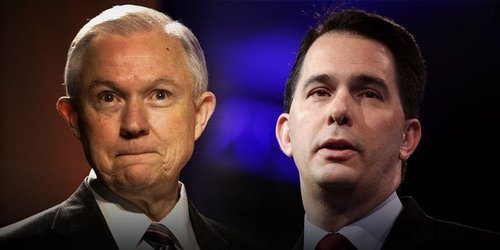 Scott Walker's turn towards immigration patriotism and partnership with Jeff Sessions has infuriated the Main Stream Media.  In their anger, journalists (which is to say, Narrative Policemen) have revealed something important about what they regard as the true enemy to be destroyed.

It's almost a cliche to bash the "Koch Brothers" as being responsible for all the right wing politics in the country.  These attacks on the Koch Brothers are especially amusing when they come from groups funded by George Soros, like Media Matters.

But now that you have a serious candidate who might actually do something about protecting the country, reporters have suddenly decided the Koch Brothers are sober, reasonable men who need to do what it takes to protect the country from nativism.

So what, exactly, did Scott Walker say that appears to have made the Kochs do such an about-face in record time? Well, it’s a doozy. Walker, you see, was once a “pro-immigration reform” Republican, which is likely one of the reasons the Koch brothers back him. Like most of the more libertarian-minded Big Business Republicans, they tend toward a more moderate stance on immigration. It’s good for business in a number of ways (for both good and bad reasons). Walker, being a proven anti-union, pro-immigration governor, was naturally at the top of their list of nominees...

But by taking a position against legal immigration, [Walker] just placed himself to the right of Ted Cruz on this issue. He’s out in Ben Carson land. Not to mention that he’s obliterated the last tattered shreds of a conservative argument to appeal to Hispanic and other ethnic groups: the idea that illegal immigration is unfair to legal immigrants who’ve been “waiting in line” to come to this country. Walker wants to close down the line altogether. Only the most hardcore neo-Confederates like Sessions want to go that far.

[Scott Walker is now toast: The crazy move right that cost him the Koch Brothers — and probably the nomination, by Heather Digby Parton, Salon, April, 22, 2015]