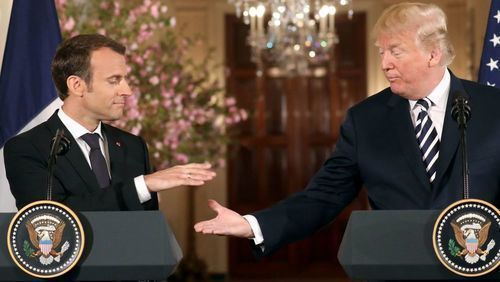 "Together," President Macron instructed President Trump, "we can resist the rise of aggressive nationalisms that deny our history and divide the world."

Before Congress he denounced "extreme nationalism," invoked the U.N., NATO, WTO, and Paris climate accord, and implored Trump's America to come home to the New World Order.

"The United States is the one who invented this multilateralism," Macron went on, "you are the one now who has to help preserve and reinvent it."

His visit was hailed and his views cheered, but, on reflection, the ideas of Emmanuel Macron seem to be less about tomorrow than yesterday.

For the world he celebrates is receding into history.

The America of 2018 is coming to see NATO as having evolved into an endless U.S. commitment to go to war with Russia on behalf of a rich Europe that resolutely refuses to provide for its own defense.

Since the WTO was created in the mid-'90s, the U.S. has run $12 trillion in trade deficits; and among the biggest beneficiaries—the EU.

Under the Paris climate accord, environmental restrictions are put upon the United States from which China is exempt.

As for the U.N., is that sinkhole of anti-Americanism, the General Assembly, really worth the scores of billions we have plunged into it?

"Aggressive nationalism" is a term that might well fit Napoleon Bonaparte whose Arc de Triomphe sits on the Champs-Elysees. But does it really fit the Hungarians, Poles, Brits, Scots, Catalans and other indigenous peoples of Europe who are now using democratic methods and means to preserve a national home for the unique peoples to whom they belong? 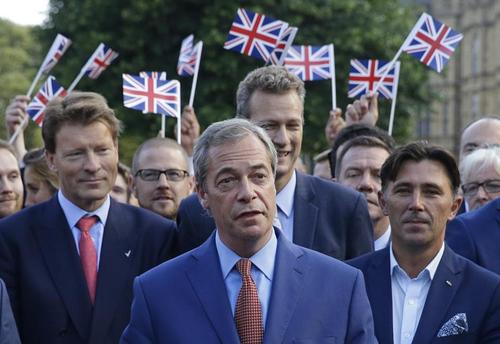 And the United States would seem an odd place to go about venting on "aggressive nationalisms that deny our history."

Did Macron not learn at the Lycee Henri IV in Paris or the Ecole Nationale d'Administration how the Americans acquired all that land?

General Washington, at whose Mount Vernon home Macron dined, was a nationalist who fought for six years to sever America's ties to the nation under which he was born.

Aggressive nationalism is a good synonym for the Manifest Destiny of a republic that went about relieving Spain of Cuba, Puerto Rico, Guam and the Philippines.

How does Macron think the "New World" was conquered and colonized if not by aggressive British, French and Spanish nationalists determined to impose their rule upon weaker indigenous tribes?

Was it not nationalism that broke up the USSR into 15 nations?

Was not the Zionist movement that resurrected Israel in 1948, and, in 1967, captured the West Bank, and then annexed East Jerusalem and the Golan Heights, a manifestation of aggressive nationalism?

Macron is an echo of that George H.W. Bush who, in Kiev in 1991, warned Ukrainians against the "suicidal nationalism" of declaring independence from the Russian Federation.

"Together," said Macron, "we will build a new, strong multilateralism that defends pluralism and democracy in the face of ill winds."

Macron belongs to a political class that sees open borders and free trade thickening and tightening the ties of dependency, and eventually creating a One Europe, whose destiny his crowd will forever control.

But if his idea of pluralism is multiracial, multiethnic, multicultural nations, with a multilateral EU overlord, he is describing a future that tens millions of Europeans believe means the death of the nations that give meaning to their lives.

And they will not go gentle into that good night.

In America, too, millions have come to recognize that there is a method to the seeming madness of open borders. Name of the game: dispossessing the deplorables of the country they love.

With open borders and mass migration of over a million people a year into the USA, almost all of them peoples of color from Third World countries who vote 70-90 percent Democratic, the left is foreclosing the future. The left is converting the greatest country of the West into what Teddy Roosevelt called a "polyglot boarding house for the world." And in that boarding house the left will have a lock on the presidency.

With the collaboration of co-conspirators in the media, progressives throw a cloak of altruism over the cynical seizure of permanent power.

For, as the millions of immigrants, here legally and illegally, register, and the vote is extended to prison inmates, ex-cons and 16-year-olds, the political complexion of America will come to resemble San Francisco.

End goal: Ensure that what happened in 2016, when the nation rose up and threw out a despised establishment, never happens again.