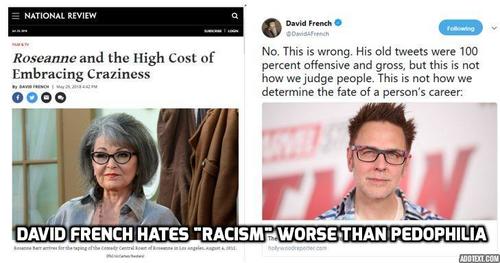 It’s the classic man-bites-dog story; a Leftist artist suffered a career setback because of his statements on social media. The person in question is Guardians of the Galaxy director James Gunn, who lost his gig directing Disney’s next installment in the film series after independent reporters such as Mike Cernovich highlighted his “jokes” about the sexual exploitation of children. Senator Ted Cruz, among others, was outraged and suggested Gunn’s comments even bordered on illegality.

Wow. These #JamesGunn tweets are just horrible. Child rape is no laughing matter. As Texas SG, I handled far too many child sexual assaults. Truly evil. I’m glad Disney fired him, but if these tweets are true, he needs to be prosecuted. pic.twitter.com/1IgHC18J4x

Hollywood celebrities are defending Gunn and even demanding that he be rehired [Chris Pratt and more break silence after James Gunn fired from 'Guardians of the Galaxy 3,' by Lisa Respers France, CNN, July 23 2018). However, one can’t help but notice the same celebrities defending or telling graphic “jokes” about sexually exploiting children are also the people who want careers ended for Politically Incorrect comments directed at privileged classes such as women, homosexuals, or nonwhites [Note: Hollywood Finds Child Rape Hilarious, by John Nolte, Breitbart, July 22, 2018].

It’s not clear why Disney, a company dependent on its appeal to children, would ever employ someone who thinks horrific crimes are comedic fodder. After all, as Gunn himself once tweeted:

& with this cartoon, my rant about Americans not understanding the basic concepts of free speech & censorship is done pic.twitter.com/w1o6tS7ez9

What’s more, this comes only weeks after comedienne Roseanne Barr had her top-rated show canceled for comparing former Obama advisor Valerie Jarrett to a monkey. (Revealingly, Barr defended herself by claiming that she thought Jarett was white--Jarrett (right) is notably pale for an African-American.) Many of the celebrities now defending Gunn openly celebrated when Roseanne was fired [Hollywood demonizes Roseanne, But Defends James Gunn Pedophile Tweets, Newswars, July 21, 2018].

Yet it isn’t just Leftist celebrities who are suddenly eager to defend the sacred right of free speech when it comes to pedophilia. Shockingly, some Conservativism Inc. luminaries, particularly those who love to showily brag about their Christianity and social conservatism, have chosen this hill to die on as well.

David French, one of the most prominent Never Trump activists of the 2016 election, rushed to Gunn’s defense, saying:

In contrast, however, when Roseanne was purged for a single tweet, French penned an entire piece for National Review on May 29, 2018 entitled Roseanne and the High Cost of Embracing Craziness.

Similarly, S.E. Cupp, who has a long career as one of CNN’s token conservatives, decided this of all things was something that she couldn’t remain silent about. She endorsed French’s tweet in support of Gunn and added:

This is mob rule (on Twitter) deciding a person’s fate. And it’s a terrible precedent. https://t.co/5CxCZPKoAm

Yet only two months ago. when mob rule on Twitter decided Roseanne’s fate, Cupp gleefully piled on. Like NR’s French, she faulted ABC for hiring Roseanne in the first place.

Remember, this is a woman who was an early supporter of birtherism, has compared Muslims to Nazis, took to Twitter regularly to attack citizens both private and public, floated wild conspiracy theories and bullied Trump opponents with racist, homophobic and anti-Semitic insults.

Roseanne, however, was different: “Roseanne played herself in the series, so when she made a new racist reference about Valerie Jarrett, her persona was inseparable from her character,” Shapiro wrote. “Roseanne was Roseanne.”

This Talmudic reasoning about how the cases are different is suspicious given how eager Shapiro is to police the American right for unauthorized speech.

Erick Erickson is another Never Trumper whose views about respectability have mysteriously changed within two months. When Roseanne was driven off the air, Erickson self-righteously proclaimed: “Her joke was not in poor taste. It was racist” [Roseanne’s behavior is not defensible, The Maven, May 30, 2018]. Yet regarding Gunn, he said:

I think Disney was wrong to fire James Gunn.

To the people upset with me for saying James Gunn shouldn't have been fired because we need to play by the left's rules, I've said for years and we are seeing right now that conservatives are winning because we aren't behaving like the cultural Gestapo.

The last comment is revealing. It’s hard to imagine in what ways conservatives are “winning”—Trump supporters are regularly attacked on the street and expelled from businesses. Random white people are humiliated by the Main Stream Media and fired from their jobs for calling the police.[BBQ Becky, Permit Patty and why the Internet is shaming white people who police people ‘simply for being black’, Jessica Guynn, USA TODAY, July 18, 2018] Meanwhile, even as the Democrats become ever more radical, they continue to enjoy all but unanimous support from the MSM and are leading the polls. Insofar as the American Right has won any major victories in the recent past, it was President Trump’s election—something Erickson and his Never Trump co-conspirators fought every step of the way.

Yet the strange connection between Never Trump and defending James Gunn is easily explained. All of the figures above rely on Leftist media, and the powerful mafias that dominate it, to grant them fame and legitimacy as “leading” American conservatives. For that reason, Never Trump conservatives share a common interest with System media outlets in making sure only certain people have access to a mass audience—certainly not independents like Mike Cernovich [How Pizzagate Pusher Mike Cernovich Keeps Getting People Fired, by Luke O’Brien, Huffington Post, July 21, 2018].

For ideological and ethnic reasons, Never Trumpers are desperate to purge the American Right of any authentic populist and nationalist tendencies that can’t be controlled from the top down. Their power relies on their audience remaining corralled within a certain ideological space and not hearing dissident ideas such as the biological reality of race or the political insanity of expecting nonwhites to vote for “limited government.” These Beltway Right hacks have a positive interest in making sure that websites and platform outside Conservatism Inc., although equally or more critical of supposed common enemies on the Left, are marginalized and stripped of resources.

Thus, Cupp, French, Shapiro, Erickson et. al will always be far more eager to purge the Conservative movement than to combat Leftist control of key cultural institutions. To a Never Trump conservative dreaming of future bylines in The New York Times and television appearances on CNN, a far-Left Hollywood degenerate poisoning the minds of America’s youth isn’t even a problem, let alone an enemy. The problem for Conservatism Inc. remains Donald Trump and what he represents—a fighting American Right, united behind nationalism, and willing to do what it takes to win power.

After all, the point of that fighting Right is not to get a sinecure in the enemy’s System. The point is to destroy it entirely.