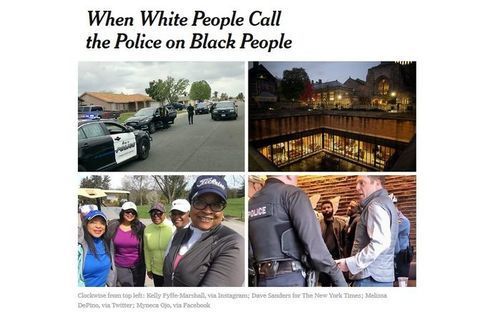 NYT All Over This Week's National Crisis: "When White People Call the Police on Black People"

When White People Call the Police on Black People

What makes the police encounters chilling is how routine they are.

They’re sparked by black people going about their everyday lives, only to be interrupted by someone calling the police for the thinnest of suspicions.

In the past month, more than a handful of such interactions have attracted widespread attention on social media — and, in turn, in national outlets like The Times, CNN and The Washington Post.

“It happens so frequently to people of color that we don’t often think of it as a big deal or as particularly newsworthy,” said Paul Butler, a Georgetown University law professor who is the author of “Chokehold: Policing Black Men.”

“We don’t often think of it as a big deal or as particularly newsworthy:” Other than all the national news coverage.

Back in April, I looked out the window one evening and there were four LAPD squad SUVs blocking the street in front of my house. It turned out that the middle-aged guy who had recently started renting the house a few doors down had misplaced his keys and tried to get in a window. A neighbor who hadn’t met him yet had called the cops, thinking he was a burglar. The cops came, the man explained in a friendly manner, and they went away.