Missing The Point On Valerie Jarrett

Edward Klein, author of The Amateur

, a book on Barack Obama, has a piece on Valerie Jarrett, White House consigliere.

Trying to figure out Valerie Jarrett’s mysterious hold on Barack and Michelle Obama is a favorite guessing game in the parlors and dining rooms of Washington. No other White House official in history has enjoyed such a unique relationship with both a president and a first lady, and yet the mainstream media have ignored Jarrett’s enormous influence over the shape and direction of the Obama administration.

Not totally ignored, there was a long profile of her in the New York Times in 2009, but yes, if the media didn't love Barack Obama so much, they'd spend a lot more time bashing Valerie Jarrett, the  way they did Karl Rove.

“Valerie is the quintessential insider,” one of her longtime friends told me during an interview for my book, The Amateur: Barack Obama in the White House

“She functions as the eyes, ears, and nose of the president and first lady. She tells them who’s saying what about who, who’s loyal and who’s not. She advises them about who they should see when they visit a city or a foreign country. She determines who gets invited to the White House and who is left out in the cold.”

In the White House pecking order, Jarrett has more clout than the president’s chief of staff. During the savage internecine warfare between Jarrett and Obama’s first two chiefs of staff — Rahm Emanuel and Bill Daley — Obama sided most of the time with Jarrett, a classic limousine liberal who believes that Obama was elected president in order to engineer social change. Ultimately, Jarrett emasculated Emanuel and Daley and forced them from their jobs.

She has also been responsible for much of the incompetence and amateurism that have been the hallmarks of Obama’s time in office. Indeed, Jarrett has been on the wrong side of practically every consequential issue to come across the president’s desk.

All  of this is good hearty stuff,  but he manages to get through an article entitled Who is Valerie Jarrett? without mentioning either her race or her color, both of which are of major importance in figuring out the answer to the 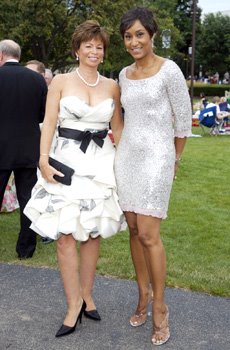 question. Her race is African-American, her color is a pale tan. (She looks kind of like Mary Tyler Moore.) Both are important in her life and career, as Steve Sailer noted in 2009:

The article starts with a boring but characteristic story of Jarrett talking a tired and annoyed Obama into wasting time making an appearance at the Pink Ice Ball gala hosted by the Alpha Kappa Alpha sorority, an African-American sorority notorious for its decades of using the brown paper bag test to decide who could pledge. (Michelle Obama wouldn't have passed; Valerie Jarrett would have with flying colors.)

Aside from missing this extremely salient point, Klein's article on her is very interesting. I wonder if his book manages to miss the same point about Barack Obama's amateurism.