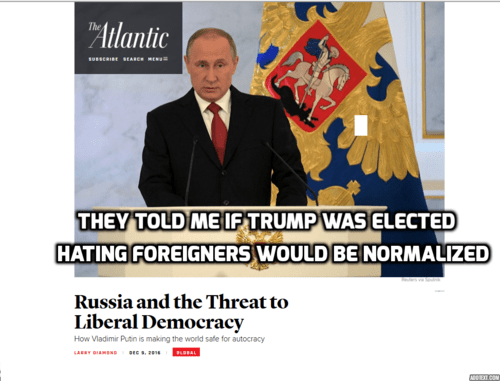 "History repeats itself, first as tragedy, then as farce," a saying attributed to Karl Marx, comes to mind in this time of Trump.

To those of us raised in the Truman era, when the Red Army was imposing its bloody Bolshevik rule on half of Europe, and NATO was needed to keep Stalin's armies from the Channel, the threat seemed infinitely more serious. And so it was.

There were real traitors in that time.

Alger Hiss, a top State Department aide, at FDR's side at Yalta, was exposed as a Stalinist spy by Congressman Richard Nixon. Harry Dexter White, No. 2 at Treasury, Laurence Duggan at State, and White House aide Lauchlin Currie were all exposed as spies. Then there was the Rosenberg spy ring that gave Stalin the secrets of the atom bomb.

Who do we have today to match Hiss and the Rosenbergs? A 29-year-old redheaded Russian Annie Oakley named Maria Butina, accused of infiltrating the National Rifle Association and the National Prayer Breakfast.

Is Putin's Russia really a reincarnation of Stalin's Soviet Union? Is Russia today a threat of similar magnitude?

Russia is "our No. 1 geopolitical foe," thundered Mitt Romney in 2012, now cited as a sage by liberals who used to castigate Republicans for any skepticism of detente during the Cold War.

Perhaps it is time to contrast the USSR of Stalin, Khrushchev and Brezhnev with the Russia of Vladimir Putin.

By the beginning of Reagan's tenure in 1981, 400,000 Red Army troops were in Central Europe, occupying the eastern bank of the Elbe.

West Berlin was surrounded by Russian troops. East Germany, Poland, Czechoslovakia, Hungary, Romania, Bulgaria were all ruled by Moscow's puppets. All belonged to a Warsaw Pact created to fight NATO. Lithuania, Latvia, Estonia, Georgia, Ukraine were inside the USSR.

By the end of the Jimmy Carter era, Moscow had driven into Ethiopia, Mozambique and Angola in Africa, Cuba in the Caribbean, and Nicaragua in Central America, in the greatest challenge ever to the Monroe Doctrine.

The Soviets had invaded and occupied Afghanistan. The Soviet navy, built up over 25 years by Adm. Sergey Gorshkov, was a global rival of a U.S. Navy that had sunk to 300 ships.

And today? The Soviet Empire is history. The Soviet Union is history, having splintered into 15 nations. Russia is smaller than it was in the 19th century. Russia is gone from Cuba, Grenada, Central America, Ethiopia, Angola and Mozambique.

The Warsaw Pact is history. The Red Army is gone from Eastern Europe. The former Warsaw Pact nations of Poland, Czechoslovakia, Hungary, Romania and Bulgaria all belong to NATO, as do the former Soviet "republics" of Estonia, Lithuania and Latvia.

When the flagship of Russia's navy, the aircraft carrier Admiral Kuznetsov, sailed from Murmansk to Syria, it had to pass through the North Sea, the Channel, the east Atlantic, the Straits of Gibraltar, and then sail the length of the Med to anchor off Latakia.

Coming and going, the Kuznetsov was within range of anti-ship missiles, aircraft, submarines and surface ships of 20 NATO nations, among them Norway, Britain, Germany, France, Spain and Portugal, and many U.S. bases and warships.

Entering the Med, the Kuznetsov had to travel, without a naval base to refuel, within range of the missiles, planes and ships of Spain, France, Italy and Greece. Along the banks of the Adriatic and Aegean there are only NATO nations, except for Kosovo, which is home to the largest U.S. base in the Balkans, Camp Bondsteel.

To sail from St. Petersburg through the Baltic Sea to the Atlantic, Russian warships must pass within range of 11 NATO nations—the three Baltic republics, Poland, Germany, Denmark, Norway, Holland, Belgium, Britain and France.

The Black Sea's western and southern shores are now controlled entirely by NATO: Romania, Bulgaria, Turkey. Russia's lone land passage to its naval base in Crimea is a narrow bridge from the Kerch Peninsula.

With the breakup of the USSR, Russia has been reduced to two-thirds of the territory and half the population of the Soviet Union.

Its former republics and now neighbors Georgia and Ukraine are hostile. Its space launches are now done from a foreign land, Kazakhstan. Its economy has shrunk to the size of Italy's.

It has one-tenth the population and one-fifth the economy of its looming neighbor, China, and, except for territory, is even more dwarfed by the United States with a GDP of $20 trillion, and troops, bases and allies all over the world.

Most critically, Russia's regime is no longer Communist. The ideology that drove its imperialism is dead. There are parties, demonstrations and dissidents in Russia, and an Orthodox faith that is alive and promoted by Putin.

Where, today, is there a vital U.S. interest imperiled by Putin?

Better to jaw-jaw, than war-war, said Churchill. He was right, as is President Trump to keep talking to Putin—right through the Russophobia rampant in this city.