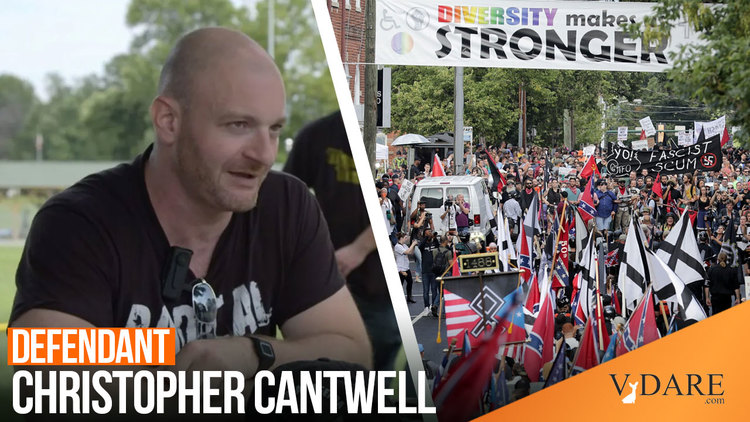 James Carson Harrington
A+
|
a-

Earlier: CHARLOTTESVILLE TRIAL WEEK ONE: Underdogs Battle Leftist-Funded Lawyers Taking Aim At The First Amendment and Half Way Into The Charlottesville Trial And Still No Conspiracy

We are on the brink of a decision in SINES V. KESSLER after a month-long civil trial.

The Leftist activists who have served as trial attorneys for the plaintiffs are joined by the Regime Media in hoping that jurors will return a verdict holding the Alt-Right defendants liable for the violence that transpired at the August 12th, 2017 Charlottesville rally [Charlottesville Lawsuit Puts Rising Intolerance on Trial, by Neil MacFarquhar, NYT, October 28, 2021].

This decision could have enormous consequences for political speech in America. The lawyer leading the plaintiffs, Roberta Kaplan, has in the era of rising populism dedicated her practice to utilizing the broken tort law system as a tool for political retaliation—most notably with her frivolous sexual harassment and defamation lawsuits aimed at Donald Trump [Roberta Kaplan Builds Progressive Firm Suing Trump, Defending Wall Street, by Erik Larson, Bloomberg, May 13, 2021].

So far, Kaplan has not landed any significant blows in her crusade to punish patriot speech.

In Sines v. Kessler, her team hopes that presiding judge Norman Moon will go down in history as the kindly old fool who let the camel peek his nose into his tent only for the whole animal to get in.

Judge Moon seemed happy to play this role last Thursday. During his final confusing and meandering instructions to the jury, Moon asserted that defendants could be found liable if they merely attended the Unite the Right rally knowing that their presence at a legally permitted rally could provoke counter-protesters to violence.

Moon’s jury instructions, which call on jurors to find liability based wholly on circumstantial evidence, can be found in transcript form here:

Moreover once a conspiracy is established, even a slight connection between the defendant and the conspiracy could be sufficient to include him in the plan.

When explaining the racial animus accusation, Moon carried the plaintiffs by telling jurors that if they felt the patriot marchers had “racist” ideas in their minds while they clashed with the mostly white communist and Antifa opposition, the burden of proof for self-defense was squarely on the shoulders of the defendants:

In this case, that [racial animus in conspiracy to violence] means that Plaintiffs must prove that Defendants were motivated either by dislike or hate for Black and Jewish people, or by hatred or dislike towards persons because of their advocacy or support for Black or Jewish people.

For a group of men who range from podcasters who regularly use racial slurs in their content, like Christopher Cantwell, to self-described National Socialists, meeting that low threshold for guilt seems, at this point, inevitable.

But some of the defendants refused to accept this premise.

Pro se defendant Richard Spencer’s last comments focused on the precedent that Roberta Kaplan and her affiliates were looking to set with the lawsuit. He pointed to the larger truth of the dispute rather than the specious details: the lawsuit is an effort by private actors to work around and hammer away at the First Amendment.

Judge Moon hamstrung Spencer whenever his speech began building passion in his defense. But Kaplan herself has stated that the purpose of the lawsuit is, one, to deter political speech she disagrees with by introducing the specter of costly litigation, and two, to use novel legal arguments that connect legal concepts not viable under US law, like “hate speech,” to violence [Jewish lawyer wants to break the back of the violent white nationalist movement, by Ron Kampeas, Times Of Israel, July 4, 2019].

Other defendants’ lawyers mounted technical closings in defense of their clients. But it was another pro se litigant, Christopher Cantwell, who stole the show.

An inflamed Cantwell, who throughout the trial was the only defendant who dared to attack directly the testimony of the plaintiffs’ parade of activists pretending to be traumatized witnesses, put the stakes of the jury verdict on the table in crystal-clear terms.

In a statement that emphasized his right to self-defense and free expression, he started by referencing an episode of his show published before the Charlottesville rally and entered into evidence, where he demonstrated the superhuman efforts made by defendants to avoid violence and obey the law.

He then pivoted back to the act of wearing a body camera during the events in question specifically to protect himself from Leftist violence and the false accusations he predicted would follow—which he is indeed now battling in court:

My desire to cooperate with law enforcement was also illustrated by my use of a body camera. You’ll recall seeing the video where I offered the SD card to the police to prove I had not drawn my weapon on several men who had confronted members of my member’s only listener meetup in the Wal Mart parking lot on August 11th.

The Lawfare narrative framing Unite the Right as a White Supremacist conspiracy to commit racial violence had a hole punched through it when Cantwell pointed to camera footage showing that a black man was involved during the planning stage of the event.

Emphasizing glaring inconsistencies like this, Cantwell hopes, will be easier for a jury to process than Moon’s rambling jury instructions.

Cantwell proceeded to recount all of the assaults he endured at the hands of Antifa during the rallies and his desperate attempts to avoid violence at any cost. On the question of self-defense, Cantwell called out the plaintiffs for playing the victim and living in a Leftist echo chamber.

Ms Kaplan in her statement today told you quote, ‘it was the plaintiffs not the defendants who were injured,’ these people live in their Twitter mentions!

All the Left’s critics have been banned from social media and they have no idea how ridiculous they look to normal people.

Noteworthy is the fact that Cantwell did not throw any of his codefendants under the bus. He revisited reams of exculpatory evidence showing that Richard Spencer, Elliot Kline and Jason Kessler were also innocent of the accusations laid against them.

Cantwell, with righteous moral confidence, went on to explain his goal in the trial. He stated that he was not just interested in clearing his own name, but in challenging the established Narrative about what occurred on August 11th and 12th.

Sure enough, you saw the [counterprotester’s] Hammer And Sickle flag outside the park, you saw the raised l=Left fist, and countless signs carried and produced by [plaintiff] Willis. You saw the IWW flags, the anarcho-communist red and black flags, signed with far-Left catch phrases like ‘No human being is illegal’ and ‘Solidarity.’

I can stop here. I did not conspire to commit racially motivated violence. I was not active on Discord. I was not in the leadership discussion channel, I was not a moderator or administrator, I was not a leader of any organization.

So perhaps I should just sit down and shut up because I won! But I told you at the beginning of this trial that I had higher ambitions than simply escaping liability. I wanted you to know what happened. I wanted to cut through the lies that have enabled so much trouble over the last four years.

I told you in my opening statement that this case is about “hate speech.” Plaintiffs’ counsel lied to you by saying that they and their clients believe in freedom of speech. They do not. You already know this.

Cantwell’s remarks, the last of the day for the defense, were delivered with a powerful moral cadence and devastating succinctness.

Subsequently, Cantwell gave a phone interview where he described jurors being visibly moved by his words and nodding in agreement.

So far, the importance of the coming Sines v. Kessler verdict has largely been ignored by free speech advocates and Conservative Inc. outlets.

But The Free Expression Foundation’s Glen Allen has just provided an in-depth analysis of this lawfare drive [The Sines v. Kessler Lawfare Litigation: A National and Historic Disgrace, FreeExpressionFoundation.org, November 19, 2021].

Allen pointed to the $25 million dollars the plaintiffs have spent litigating the case against the essentially indigent defendants. These defendants were also banned by Big Tech from fundraising for their defense.

He argued that, even if the plaintiffs fail to hold defendants liable, the practice of using well-funded and politically connected lawyers using the process to bankrupt defendants as retaliation for engaging in free speech is unethical:

As this case has at last, after three years, reached trial, most of the original twenty-five defendants have defaulted or are representing themselves.

Allen also criticized the invasive discovery process both Judge Moon and Magistrate Judge Joel Hoppe oversaw in the lead-up to the trial. By making wildly broad demands for access to defendants’ personal files and property, Kaplan deliberately “imposed on the defendants the often onerous, frustrating and expensive burden of litigating discovery disputes.”

Allen also noted that, on expert testimony, the gulf in resources was particularly stark. During the trial it came out that plaintiffs paid self-described experts such as Deborah Lipstadt and Peter Simi up to $30,000 dollars just to sit and testify that telling racist jokes is inextricable from a desire to commit terrorism and violence against minorities.

Allen dug into the fundamental problems of conspiracy law and how it can be abused to make one individual liable for the acts of another—even if the two had never met or communicated before.

The many defendants named in that complaint had varied degrees of involvement in the UTR rally and, more to the point, varied degrees of involvement – often none at all – in the actions or statements of some of the other defendants that could be construed as violence or calls to violence. Their lack of involvement, however, will avail them nothing if the plaintiffs’ conspiracy allegations stick, for each defendant will then be liable for all the actions and statements of the others.

Ultimately, Judge Moon and the federal court in the Western District of Virginia are responsible for the dangerous and absurd spectacle.

Regardless of what the jury concludes this week, Sines v. Kessler is a manifestation of deep rot in the judiciary that is causing many Americans to lose faith in its capacity to deliver a fair trial.

James Carson Harrington [Email him] is a Dissident Right journalist who was "redpilled" long ago."