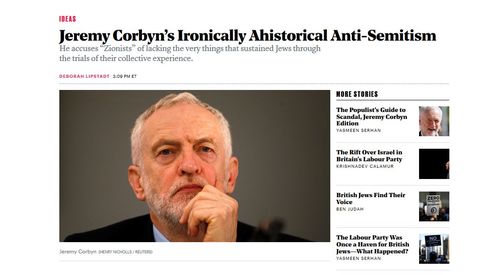 THE ATLANTIC: How Dare Jeremy Corbyn Criticize Any Jew Anywhere for Lacking Irony?

As I mentioned yesterday, British Labour Party leader Jeremy Corbyn is being given a transatlantic keelhauling over an extremely dull 2013 video of him criticizing certain Zionist activists who one evening berated a friend of his, the Palestinian envoy to the UK, for lacking “English irony.”

For example, in The Atlantic today, historian Deborah Lipstadt is outraged that Corbyn is daring to criticize some Zionists for lacking “irony,” when everybody knows that Jews are the world champion ironists. And Jewish supremacy at irony is No Laughing Matter! (Especially not compared to gentile Brits, their chief rivals in global witticism dominance.)

He accuses “Zionists” of lacking the very things that sustained Jews through the trials of their collective experience.

The past two years have brought a seemingly unending stream of revelations about disparaging comments made by the British Labour Party leader, Jeremy Corbyn, about Jews, Zionists, and Israel. But in recent days has come the lowest blow, with the emergence of a video from 2013. Corbyn, in speaking of people who approached the Palestine Liberation Organization representative to the United Kingdom to challenge points he had made in a talk, declared that such Zionists “clearly have two problems. One is that they don’t want to study history, and secondly, having lived in this country for a very long time, probably all their lives, they don’t understand English irony, either.”

Corbyn may have said “Zionists” and not “Jews,” but listening to the speech, the two seemed interchangeable.

Corbyn was specifically contrasting the supposedly humorless Zionists who had berated his friend Professor Hassassian that evening with Prof. H’s mastery of English irony. It is completely tendentious for all these media figures to claim that, while the words Corbyn spoke were about certain individuals, You Can Just Tell that Corbyn wasn’t talking about specific individual Zionists at one time and place in 2013, but was actually talking, once you feed his message through your anti-Semitism decoder ring, about All Jews Everywhere Lacking Irony.

It wasn’t their ideology he attacked, but what he deemed their lack of Englishness—that “Zionists” might live in Britain for a very long time, even all their lives, and still remain alien, unable to grasp either history or irony. For this Jew, this was a cut to the quick. For what is it but a sense of history and irony that has sustained Jews through the vicissitudes of their collective experience?

Corbyn gets it so very wrong. The most observed Jewish ritual of the entire year—the Passover Seder—is a reenactment of history. Every Jewish festival is linked to a moment in the collective history of the Jewish people. The central prayer of every Jewish service describes God as the Lord of Abraham, Isaac, and Jacob (and in updated versions, Sarah, Rebecca, Rachel, and Leah) and not simply as the all-powerful creator of heaven and earth. Jews are obsessed with history.

And no sense of irony? This one really felt like a sucker punch. Jews have relied on irony to help them traverse the most difficult moments in their history. …

It was this latest recording from Corbyn that left many Jews utterly convinced that this was a man in whom contempt for Jews ran deep—far deeper than necessary. It’s not a new problem in British politics. Maybe Corbyn should be reminded of the retort offered by Benjamin Disraeli, the U.K.’s only prime minister of Jewish origin, when attacked in the House of Commons for being a Jew. “Yes, I am a Jew. And when the ancestors of the right honorable gentlemen were brutal savages in an unknown island, mine were priests in the temple of Solomon.”

Ironically, over time this quote has come to be seen as plucky Disraeli punching up against the short pedigrees of English stuffed shirts. But, Disraeli, who knew on which side his bread was buttered, was actually punching down with an anti-Irish Catholic ethnic slur against Daniel O’Connell, the leader of the Roman Catholic Irish wing in Parliament, who was known to the oppressed Irish Catholics as The Liberator and The Emancipator.