Charlottesville Represses Unite The Right Rally Despite Court Order; No Protection From AntiFa

A "State of Emergency" is being declared by police in Charlottesville, and there seems to be a lot of fighting:

#Charlottesville refused to honor permit as ordered by a federal judge. CPD didn't even show up until 1.5 hrs into the permit.

My recommendation: Disperse. Get out of Charlottesville city limits. State of emergency has been called.

You may remember that during the election campaign, police were either powerless, or were told to act powerless, to prevent attacks on Trump rallies and supporters: see The Fulford File | Alt Right Speech Is A Crime, Leftist Physical Attacks Are “Protests”.

It seems that the Charlottesville city government, with its white liberal Mayor and its black Vice Mayor, is willing to work harder to to prevent dissidence than the Costa Mesa Police, below, as described in my 2016 article, were willing to work to protect the American Democratic process: 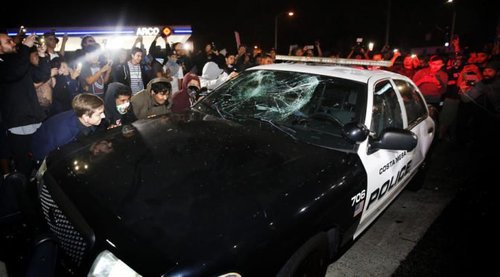 Protesters "protest" a police car at a Trump rally in California.

Larry Sabato of the University of Virginia retweeted this, with the headline about the (peaceful) torchlight march:

You see where it says "Torch Rally Ends In Violence"? That means "Parade Was Attacked By Antifa".