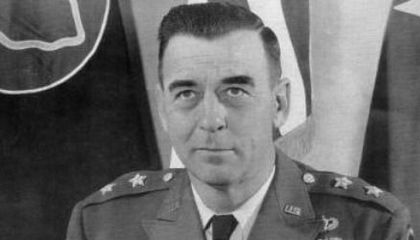 This  post [The Assassin Who Would Save America From The Extreme Right] from Michael Moynihan at Reason, making many of the points about Andrew Sullivan, the JFK assassination and the attempted assassination of "far-right" figure General Edwin Walker, that I meant to earlier, although with a slightly different emphasis.

While you're thinking about this, and the fact that  remember the NYT's Linda Greenhouse comparing Arizona politicians to Nazis

"But let’s play this game anyway (everyone else seems to be doing it, after all), and look for an example of a hyperpoliticized assassin attempting to save America from an impending far-right dictatorship.

At his blog, Andrew Sullivan offers, without comment, a contemporaneous passage from historian William Manchester describing the political climate in the months before the 1963 assassination of President Kennedy—Swastikas daubed on Jewish stores, “radical Right polemics” showing up in schools, mainstream liberals being accused of harboring Red sympathies, and Dallas as “the mecca for medicine-show evangelists of the National Indignation Convention, the Christian Crusaders, the Minutemen, the John Birch and Patrick Henry societies.”

Now many pundits have already pointed out that Oswald, who defected to the Soviet Union and agitated for Castro as a member of the “Fair Play for Cuba” committee, was the political opposite of a "radical right" knuckle-dragger; he was, in fact, a delusional loner who claimed he was motivated by opposition to Kennedy’s Cold War foreign policy. (Proving that talent skips a generation, Robert F. Kennedy Jr. offers this baffling, almost Soviet piece of historical revisionism, blaming the far-right rhetoric of 1960s Texas for the assassination of his uncle by a far-left weirdo. He employs the same Manchester passage.)

But it is often forgotten, in the swamp of conspiracy theories and lurid fantasies of Sam Giancana and Judith Exner, that prior to shooting President Kennedy, Oswald made an attempt on the life of Gen. Edwin Walker, the far-right Birch Society activist who had denounced the Kennedy administration as “traitors” to America and urged “armed resistance” in order to force “the return of constitutional government.” According to his wife Marina, Oswald said that to have murdered Walker would have been like murdering Hitler, saving America from a fascism and therefore saving countless innocent lives.

That extreme political environment in Texas, in which representatives of the paranoid right warned of Moscow plots to fluoridate the water supply, so worried Lee Harvey Oswald that he attempted to murder one of its most vocal and recognizable advocates. Allow me to co-opt the logic of the “dangerous rhetoric” brigades and suggest that this type of thinking must be bidirectional; we should therefore warn against too much vilification of those on the talk radio right, lest someone attempt to rid the United States of the pundit extremists that are threatening the very foundations of democracy.

Again, I don’t buy any of this. But by the accepted standards of debate about "responsibility" for the actions of the mentally unstable, I must ask who is to blame when Oswald, who in the weeks before the attempt on Walker's life was photographed with copies of The Militant and The Worker, two tub-thumping communist newspapers that attacked the “terrorist” policies of the White House and the extremism of Walker, used violence to rid America of a "Hitlerian" threat? Of course, the answer is Lee Harvey Oswald. But remember, we are employing post-Giffords reasoning to the Kennedy assassination. In other words, using the logic set forth by people like Chris Matthews, by creating a fear that America has reached the historical nadir of political discourse, that talk radio figures are threatening the American way of life and democracy itself, aren’t we signaling to the mentally unstable that the Republic must be saved from those who want to impose tyranny?"[More]