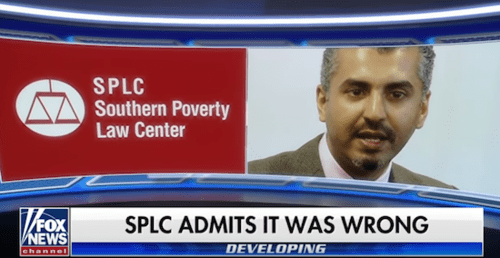 $PLC Forced to Cough Up Cash and Apology to Defamation Victim

It is sweet to see the evil Southern Poverty Law Center get a long overdue smackdown for its years of predatory attacks against decent persons who disagree with the leftist party line. The beneficiary is Muslim reformer Maajid Nawaz who was bashed by the Southern Povs in the 2016 hit piece Field Guide to Anti-Muslim Extremists. He was one of 15 heroic patriots who have warned the public against the jihad movement bent on destroying Western Civilization and establishing a totalitarian world state run according to Islam.

The SPLC produced an apology and awarded Nawaz $3.375 million, a helpful sum for his Quilliam Foundation. Not that the Southern Povs will notice the payout: in 2017 the Washington Free Beacon examined the organization’s 2015 tax filings, revealing more than $50 million in contributions and $328 million in net assets

After the SPLC screed was published in 2016, Nawaz responded, “The non-Muslim led Southern Poverty Law Center placing a jihadi target on my head by listing me (a reforming liberal Muslim) as an ‘anti-Muslim extremist’ on their hit list published today.”

So while the SPLC normally just ruins reputations, it actually endangered Nawaz’ life, since jihadists are touchy fellows who behead apostate Muslims at the slightest provocation.

Here’s a report from Fox News:

Interestingly, The Social Contract’s most recent issue focuses on the SPLC, and includes my article, In the War to Defend Western Civilization from Jihadist Islam, the SPLC Sides with the Enemy.

The Washington Times put its article on the front page Tuesday.

The Southern Poverty Law Center took a devastating hit to its credibility and reinforced its reputation for unfairly wielding the “hate” label Monday by agreeing to pay millions of dollars to an organization previously included on a list of “extremists.”

In a stunning settlement, SPLC President Richard Cohen issued an apology and agreed to pay $3.375 million to the British-based Quilliam Foundation and founder Maajid Nawaz after they appeared in a since-deleted 2016 journalists’ guide to “anti-Muslim extremists.”

The agreement, reached after Mr. Nawaz threatened to sue, prompted the center’s many critics on the right to reissue calls for media outlets and companies, which include Google and Amazon, to stop relying on the center for neutral “hate group” assessments.

Tony Perkins, president of the Family Research Council, one of 954 groups listed on the SPLC’s “hate map,” argued that the settlement terms “leave the media and big business with no excuse in continuing to use the SPLC as an objective, independent source.”

“The Southern Poverty has long been the Left’s pit bull — resorting to smears and a hate map to advance its liberal political agenda,” Mr. Perkins said in a statement. “But its falsehoods and dangerous tactics have finally caught up with them — with the group doling out millions in a defamatory settlement.”