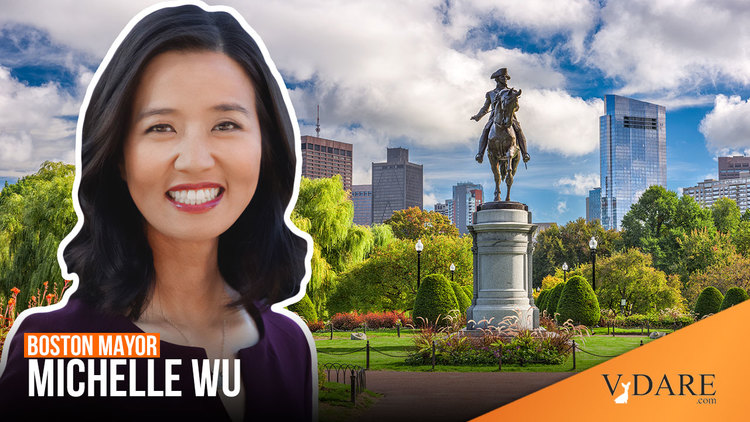 Over the years, we have all heard pundits on the Left and Right promote the Model Minority myth about Asian-Americans, both immigrant and native born. The basic talking point goes something like this: Asians are a hard-working, self-reliant demographic who come to the United States and pull themselves up by the bootstraps in pursuit of the American Dream. They are also largely prosperous and law-abiding and, therefore, they are a “Model Minority” [What We Can Learn From Asian Americans, by Mona Charen, Palm Beach Post, April 5, 2021].

Yes, but like so many Open Borders talking points, it is half true and half misperception—and the misperception can be dangerous unless it is acknowledged. The truth is that Asians, particularly well-educated Asians, make up a growing segment of the anti-American, Open Borders Left.

Why is this the case?

In Dreams from My Father, a twenty-something Barack Obama describes a trip across Europe where he felt disconnected from the achievements of the historic civilizations he visited:

And by the end of the first week or so, I realized that I’d made a mistake. It wasn’t that Europe wasn’t beautiful; everything was just as I’d imagined it. It just wasn’t mine.

This “It just isn’t mine” factor explains much of the social dysfunction in the U.S., including why many minorities who have had the benefit of attending prestigious universities have come to resent the experience so intensely.

White Americans have long assumed that, when minorities were given access to the country’s most distinguished institutions, it would assimilate them and make them like us more. But instead it seems only to reinforce their antipathies.

We have seen this in the number of Affirmative Action students, many of whom are on full scholarship, posting photos on social media that declare: “I am Harvard” or “I am Princeton.” What these students are really saying is that they are not Harvard or Princeton and never can be—because Harvard and Princeton were founded by white Protestant men.

Or to adapt President Obama: Yes, Harvard and Princeton are both beautiful, but they’re just not mine.

There have been many efforts to assuage this sense of demographic disconnect, such as Harvard’s Minority Portrait Project, which aspires to place more paintings of minority graduates and faculty inside campus buildings, but such gestures seem to only make things worse [About Face at Harvard, by Tracy Jan, Boston Globe, November 7, 2010].

Many conservatives naively assume that this disconnect would not exist without Affirmative Action, and furthermore, that Asians must not share it because they do not rely on lower standards for admission to prestigious universities [Rise of the Chine-American Right, by Rong Xiaoqing, National Review, July 17, 2019 ]. The argument: Asians rely on merit, and if other minorities were admitted simply on merit, then we could all just Get Along.

Unfortunately, this notion is false because the “It just isn’t mine” factor is something that many Asians clearly share with blacks, which is why they often align politically, despite the well-documented hatred blacks have for Asians, most obviously demonstrated by the growing number of brutal black -on-Asian assaults across the country.

Consider the case of former Deputy Attorney General Bill Lann Lee, who attended Yale on a scholarship, then Columbia Law School. However, instead of being grateful for such an  experience, he immediately took up arms against the Historic American Nation by working for the NAACP, then the Clinton Justice Department, where the Republican Senate—in a rare display of principle—refused to officially confirm him [Clinton defies GOP with Lee recess appointment, Washington Times, August 4, 2000].

This brings us to Michelle Wu [Email her] the current mayor of Boston.

Michelle Wu is the daughter of Taiwanese immigrants and a native of Chicago who moved to Massachusetts to attend Harvard University, then Harvard Law School, where she became a protege of Elizabeth Warren. After law school, Wu successfully ran for Boston City Council in 2013 and the press began to herald her as the “first Asian female” City Councilor [Michelle Wu takes reins as Boston City Council president, by Jack Encarnacao, Boston Herald, November 18, 2018 ]. Wu, like Deval Patrick before her, often pretends that her minority status has been an obstacle that she has continually striven to “overcome” when in reality it has always been a free ticket to an easy election.

After President Biden made former Mayor Marty Walsh the Secretary of Labor, the city held a short election to replace him. Given that Wu had consistently enjoyed glowing press coverage without having to do anything but sit still and be Asian she cruised to an easy victory in a weak field [Michelle Wu wins historic Boston mayor’s race, marking a new era for the city, Boston Globe, November 3, 2021].

Michelle Wu, the 36-year-old daughter of Taiwanese immigrants, captured the Boston mayoralty by a wide margin on Tuesday, shattering barriers to mark a new era in one of the nation’s most durable bastions of white male political power. https://t.co/HRX3qTQNBH

Indeed, Wu was elected in part because she was not white, but also not black. Boston whites, who have a strong need to see themselves as pro-minority are genuinely frightened of blacks, but not of Asians.

Nevertheless, just a few months into her tenure, the 37-year-old Michelle Wu has already become the most unpopular mayor in the city’s nearly 400 year history; a city she aspires to remake, but clearly does not understand [Boston Mayor Michelle Wu hopes to transform her adopted city, by Steve LeBlanc, Associated Press, April 8, 2022].

One of Wu’s first blunders was to bring in a fellow Taiwanese-American, Tiffany Chu, from San Francisco to serve as Chief of Staff and whose top priority was to ensure “gender equity” in snow plowing across the city [Boston mayor’s chief of staff calls for gender equity in snow removal, by Denette Wilford, Toronto Sun, January 28, 2022].

Hard to believe, I know. But that is not even the worst of it.

Mayor Wu’s biggest political belly flop was to impose a COVID vaccine mandate on public service employees and private citizens. The so-called B Together Initiative was an Orwellian COVID vaccine passport required of all citizens in order to enter most of the city’s venues, including bars, restaurants, gyms, and museums.

Fortunately, the public opposition to both the COVID shot and B Together was overwhelming and very well organized. There were huge public protests by union members and concerned citizens across the city, and many restaurants simply ignored the vaccine passport requirement entirely.

In the face of such intense public opposition, Wu eventually backed down and withdrew the vaccine passport. But she attributed her defeat to white racism:

I've grown up my whole life knowing what it feels like to feel invisible or othered, and this is an experience that far too many Americans share . . . Standing at the podium, hearing the demonstrators who were opposing our policies singing patriotic songs and chanting 'USA'—the message was clear that we don't belong here in their eyes, and shouldn't be trying to take away something that they perceive they have and are losing.

It says a lot about where we are today as a country when the mayor of Boston—the fount of the American Revolution—can claim that it is bigotry to shout “USA” in defense of one’s personal liberty.

However, the more revealing part of Wu’s statement is her admission that throughout her “whole life” she has felt “invisible or othered” in her own country—which is, of course, another way of saying that “It just isn’t mine.”

Amidst her sinking popularity, Mayor Wu attended the Boston Saint Patrick’s Day Breakfast, a popular political tradition during which there is enormous pressure to be funny. During her remarks, Wu described her first four months in office this way:

The joke dropped like a lead balloon because everyone knew that Wu wasn’t joking. She really does despise white people, which explains why she has been openly targeting the white restaurant owners in the historic North End who bucked her vaccine passport [”This is tyranny!”: North End business owners lash out in City Hall, by Drew Karedes, Boston 25 News, March 29, 2022].

(Strikingly, this seems to so even though Wu has a white husband and mixed-race children—see Meet Conor Pewarski, Boston’s first gentleman. If you haven’t heard of him, he’s probably OK with that [Boston Globe, November 20, 2021]. Of course, quite a few colored female anti-white radicals have white partners—notably Alexandra Ocasio-Cortez, Kamala Harris, Ketanji Brown Jackson,  and (now) Ilhan Omar. It’s definitely a Thing. Similarly, some have white mothers. This makes the prospects for assimilation even worse).

There are, of course, many genuinely patriotic Asians, including a number who are enthusiastic fans of VDARE.com. But for every Michelle Malkin how many more Michelle Wus are out there? The reality is that Asian voters consistently support left-wing candidates in large numbers, and there is no reason to expect that to change anytime soon [Asian Americans voted for Biden 63% to 31%, but the reality is more complex, by Kimmy Yam, NBC, November 9, 2020]. (The reality isn’t more complex: Steve Sailer wrote Asian "Natural Republicans" Vote 75% Democratic—Any More Bright Ideas? in 2005.)

This should really surprise no one because the Marxist premise of the “It Just Isn’t Mine” radical is that in order for the world to finally feel like it is ours, we must destroy what is theirs—then Build Back (so to speak) Better.

At any rate, we are now witnessing the strange phenomena of a growing number of privileged “It Just Isn’t Mine” Asians working to undermine the Historic American Nation—and one of them is hard at work destroying one of America’s most historic cities.

The good news, however, is that even in liberal Massachusetts, people have begun to resist.