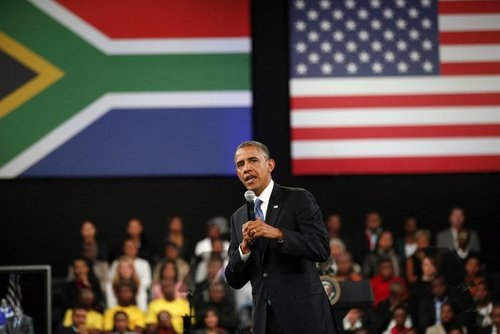 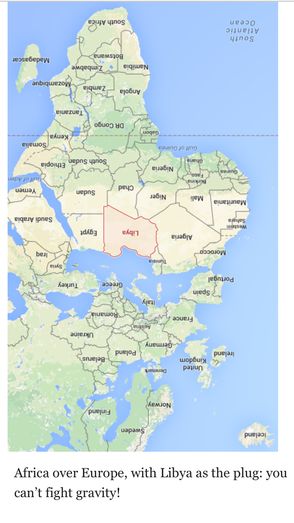 As you’ll recall, the 2011 destruction of the internationally recognized Libyan government by United States airpower in effect pulled the plug that had been bottling up 1.1 billion Africans from draining into Europe. Col. Gaddafi had contracted with Italian PM Silvio Berlusconi to limit transit through Libya of sub-Saharan Africans. But the murder-by-sodomy of Col. Kaffafee by roving bands backed by the U.S. military removed that impediment to the current mass migration.

With a demographic inundation of Europe by Muslims, Africans, and Muslim Africans looming (absent clear-eyed pro-European leadership), it’s worth listening to what a key international player — the President of the United States — has told us in his own words about his deepest feelings regarding Europe and Africa.

Thus, this passage from Dreams from My Father: A Story of Race and Inheritance by Barack Obama may be of historical rather than just literary interest:

I FLEW OUT OF HEATHROW Airport under stormy skies. A group of young British men dressed in ill-fitting blazers filled the back of the plane, and one of them–a pale, gangly youth, still troubled with acne-took the seat beside me. He read over the emergency instructions twice with great concentration, and once we were airborne, he turned to ask where I was headed. I told him I was traveling to Nairobi to visit my family.

“Nairobi’s a beautiful place, I hear. Wouldn’t mind stopping off there one of these days. Going to Johannesburg, I am.” He explained that as part of a degree program in geology, the British government had arranged for him and his classmates to work with South African mining companies for a year. “Seems like they have a shortage of trained people there, so if we’re lucky they’ll take us on for a permanent spot. Best chance we have for a decent wage, I reckon–unless you’re willing to freeze out on some bleeding North Sea oil rig. Not for me, thank you.” I mentioned that if given the chance, a lot of black South Africans might be interested in getting such training.

“Well, I’d imagine you’re right about that,” he said. “Don’t much agree with the race policy there. A shame, that.” He thought for a moment. “But then the rest of Africa’s falling apart now, isn’t it? Least from what I can tell. The blacks in South Africa aren’t starving to death like they do in some of these Godforsaken countries. Don’t envy them, mind you, but compared to some poor bugger in Ethiopia–”

A stewardess came down the aisle with headphones for rent, and the young man pulled out his wallet. “’Course, I try and stay out of politics, you know. Figure it’s none of my business. Same thing back home–everybody on the dole, the old men in Parliament talking the same old rubbish. Best thing to do is mind your own little corner of the world, that’s what I say.” He found the outlet for the headphones and slipped them over his ears.

“Wake me up when they bring the food, will you,” he said before reclining his seat for a nap.

I pulled out a book from my carry-on bag and tried to read. It was a portrait of several African countries written by a Western journalist who’d spent a decade in Africa; an old Africa hand, he would be called, someone who apparently prided himself on the balanced assessment. The book’s first few chapters discussed the history of colonialism at some length: the manipulation of tribal hatreds and the caprice of colonial boundaries, the displacements, the detentions, the indignities large and small. The early heroism of independence figures like Kenyatta and Nkrumah was duly noted, their later drift toward despotism attributed at least in part to various Cold War machinations.

But by the book’s third chapter, images from the present had begun to outstrip the past. Famine, disease, the coups and countercoups led by illiterate young men wielding AK-47s like shepherd sticks–if Africa had a history, the writer seemed to say, the scale of current suffering had rendered such history meaningless.

I set the book down, feeling a familiar anger flush through me, an anger all the more maddening for its lack of a clear target. Beside me the young Brit was snoring softly now, his glasses askew on his fin-shaped nose. Was I angry at him? I wondered. Was it his fault that, for all my education, all the theories in my possession, I had had no ready answers to the questions he’d posed? How much could I blame him for wanting to better his lot? Maybe I was just angry because of his easy familiarity with me, his assumption that I, as an American, even a black American, might naturally share in his dim view of Africa; an assumption that in his world at least marked a progress of sorts, but that for me only underscored my own uneasy status: a Westerner not entirely at home in the West, an African on his way to a land full of strangers.

I’d been feeling this way all through my stay in Europe–edgy, defensive, hesitant with strangers. I hadn’t planned it that way. I had thought of the layover there as nothing more than a whimsical detour, an opportunity to visit places I had never been before. For three weeks I had traveled alone, down one side of the continent and up the other, by bus and by train mostly, a guidebook in hand. I took tea by the Thames and watched children chase each other through the chestnut groves of Luxembourg Garden. I crossed the Plaza Mejor at high noon, with its De Chirico shadows and sparrows swirling across cobalt skies; and watched night fall over the Palatine, waiting for the first stars to appear, listening to the wind and its whispers of mortality.

And by the end of the first week or so, I realized that I’d made a mistake. It wasn’t that Europe wasn’t beautiful; everything was just as I’d imagined it. It just wasn’t mine. I felt as if I were living out someone else’s romance; the incompleteness of my own history stood between me and the sites I saw like a hard pane of glass. I began to suspect that my European stop was just one more means of delay, one more attempt to avoid coming to terms with the Old Man. Stripped of language, stripped of work and routine–stripped even of the racial obsessions to which I’d become so accustomed and which I had taken (perversely) as a sign of my own maturation–I had been forced to look inside myself and had found only a great emptiness there.

Would this trip to Kenya finally fill that emptiness?

Has anyone ever asked the President if the main result of his Libya policy, the current Camp of the Saints in the Mediterranean, strikes him as a bug … or as a feature?