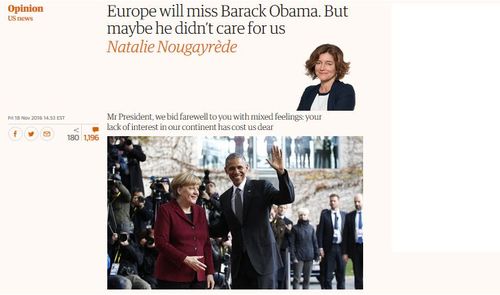 Unsurprisingly, Donald Trump, who has made a career out of not being ashamed to like nice things, has stated that he wishes Europe to stay much as it is rather than be inundated by hundreds of millions of Third World immigrants. Various respectable spokespeople, such as Heidi Beirich of the SPLC, have been struggling to come up with an explanation of why that is such a horrible thing to say.

A different President, however, was more in tune with our age’s growing feeling that the existence of Europe is insensitive to many people not of European descent (and to those who choose not to acknowledge their European ancestry for literary performance reasons). As with most prose effusions by him, it’s hard to excerpt, although the final sentence is concise. From Dreams from My Father: A Story of Race and Inheritance by Barack Obama:

I FLEW OUT OF HEATHROW Airport under stormy skies. .. a pale, gangly youth, still troubled with acne-took the seat beside me.

“Nairobi’s a beautiful place, I hear. Wouldn’t mind stopping off there one of these days. Going to Johannesburg, I am.” … “But then the rest of Africa’s falling apart now, isn’t it? Least from what I can tell. The blacks in South Africa aren’t starving to death like they do in some of these Godforsaken countries. Don’t envy them, mind you, but compared to some poor bugger in Ethiopia-” …

I pulled out a book from my carry-on bag and tried to read. It was a portrait of several African countries written by a Western journalist [most likely The Africans by David Lamb of the Los Angeles Times] who’d spent a decade in Africa; an old Africa hand, he would be called, someone who apparently prided himself on the balanced assessment. The book’s first few chapters discussed the history of colonialism at some length: the manipulation of tribal hatreds and the caprice of colonial boundaries, the displacements, the detentions, the indignities large and small. The early heroism of independence figures like Kenyatta and Nkrumah was duly noted, their later drift toward despotism attributed at least in part to various Cold War machinations.

But by the book’s third chapter, images from the present had begun to outstrip the past. Famine, disease, the coups and countercoups led by illiterate young men wielding AK-47s like shepherd sticks-if Africa had a history, the writer seemed to say, the scale of current suffering had rendered such history meaningless.

I set the book down, feeling a familiar anger flush through me, an anger all the more maddening for its lack of a clear target. Beside me the young Brit was snoring softly now, his glasses askew on his fin-shaped nose. Was I angry at him? I wondered. Was it his fault that, for all my education, all the theories in my possession, I had had no ready answers to the questions he’d posed? How much could I blame him for wanting to better his lot? Maybe I was just angry because of his easy familiarity with me, his assumption that I, as an American, even a black American, might naturally share in his dim view of Africa; an assumption that in his world at least marked a progress of sorts, but that for me only underscored my own uneasy status: a Westerner not entirely at home in the West, an African on his way to a land full of strangers.

I’d been feeling this way all through my stay in Europe-edgy, defensive, hesitant with strangers. I hadn’t planned it that way. I had thought of the layover there as nothing more than a whimsical detour, an opportunity to visit places I had never been before. For three weeks I had traveled alone, down one side of the continent and up the other, by bus and by train mostly, a guidebook in hand. I took tea by the Thames and watched children chase each other through the chestnut groves of Luxembourg Garden. I crossed the Plaza Mejor at high noon, with its De Chirico shadows and sparrows swirling across cobalt skies; and watched night fall over the Palatine, waiting for the first stars to appear, listening to the wind and its whispers of mortality.

And by the end of the first week or so, I realized that I’d made a mistake. It wasn’t that Europe wasn’t beautiful; everything was just as I’d imagined it. It just wasn’t mine.