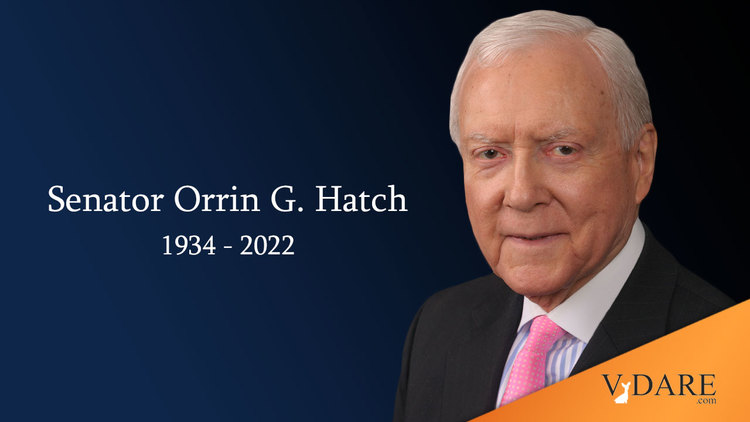 See earlier, by Peter Brimelow: Orrin Hatch Could Perform “A Simple Act Of Kindness” For Democrat Axelrod—But Not For Judge Roy Moore?

Seven-term former U.S. Sen. Orrin Hatch of Utah died last weekend, and accolades came pouring in from both sides of the political spectrum. This is not any kind of testament to his character or ability to "bring both sides together." It's really just proof that the toxic Washington Swamp is run by a uniparty of entrenched elites and their corrupt coterie of oligarch donors.

I've said it for more than two decades, and I'll say it again because no one else will: The unvarnished truth is that Orrin Hatch was an open-borders globalist who served Big Tech oligarchs, U.S. Chamber of Commerce traitors and U.S. government careerists while stabbing American workers and citizens in the back for his entire public life. He was a prototypical wheeler-dealer driven by self-preservation, not by principle. His political wisdom was of the wet-finger-in-the-wind variety, claiming a Reagan conservative mantle during election cycles and then throwing constitutional conservatives under the bus once comfortably back in his well-worn Senate committee seats.

Hatch preached "civility" for all his liberal Democrat Senate buddies but attacked grassroots Tea Party conservatives as "nuts." Collegiality only applies to the wealthy and powerful.

To wit: Hillary Clinton paid tribute to Hatch by praising his "willingness to find common ground." She reminisced about how "When I was first lady, he worked with me and Ted Kennedy to get SCHIP done; as a fellow Senate colleague, he reached across the aisle to serve Utah and the country." As I've long documented, Hatch became the alcoholic Chappaquiddick swimmer's best Beltway barnacle pal during his 42-year tenure in Washington. Their State Children's Health Insurance Program monstrosity was a health care Trojan Horse for Obamacare that is now a $20 billion-a-year entitlement.

Twenty years ago, Hatch and Kennedy were also original open-borders co-sponsors of the illegal alien amnesty for millions of border-crossing invaders known as the "DREAM Act." Hatch and Kennedy then teamed up to create the $6 billion national service GIVE/SERVE boondoggle in 2009, which quickly evolved into a slush fund for endless progressive social justice pet projects and Obama pals. In the name of "bipartisanship," Hatch backed the nominations of Obama tax-cheat Treasury Secretary Tim Geithner and scandal-plagued, Constitution-sabotaging Attorney General Eric Holder.

"I like Obama," Hatch declared, "I think he's a clever, articulate, handsome guy with a tremendous smile, and I think he's intelligent, and I want him to be a success."

Speaking of Obama pals and other left-wing malefactors, encrusted Beltway operative Robert Reich eulogized Hatch as a "principled conservative and a friend." Doddering President Joe Biden issued a White House statement mourning Hatch as "a leader of deep faith who looked out for the people who often didn't have a voice in our laws."

Whose voices are these oozing stooges talking about, you ask?

Answer: As I reminded amnesia-plagued "conservatives" when he finally retired in 2018, Hatch crusaded for "fiscal conservatism" while voting for massive Wall Street bailouts, 16 debt ceiling increases totaling $7.5 trillion, and scores of earmarks totaling hundreds of millions of dollars for porky projects—including $20 million for his own Solyndra-style green energy failure, a bankrupt environmental firm known as Raser Technologies.

Hatch raked in millions from Big Pharma, pocketed generous Microsoft donations (after originally crusading against Bill Gates' monopoly), and ended his four-decade reign as the Senate's top recipient of lobbyist cash. He spent his retirement years spearheading a multimillion-dollar fundraising campaign, squeezing donations from corporate donors and health care and tech lobbyists to subsidize a "Hatch Foundation" and "Hatch Center" to commemorate the Hatch record of back-scratching, elbow-rubbing, pay-for-play business as usual.

Is that what the globalist Beltway hacks at National Review have in mind when they hailed Hatch's "towering" conservative record this week? Is this what all of the other Washington creatures in both parties are thinking of when they extol Hatch's "statesmanship"?

The "civility" mob in Washington and online raps my knuckles and tells me to shush when their Swamp "heroes" finally meet their maker (just Google my name and the phrase "the ghost of John McCain"). Same with Hatch. "Let the man rest in peace," one of his defenders lectured me this week. "Not OK to say this today," another clucked.