Big Law Buckling To Big Left—So Much For Legal Ethics

The Supreme Court’s decision in United States v. Texas, the Obamnesty case argued April 18, is not expected until June at the earliest. But the backstory demonstrates just how far to the Left the top corporate law firms (“Big Law”) have moved—as (perhaps less surprisingly) does the controversy over the Donald Trump campaign’s legal representation in Washington D.C. 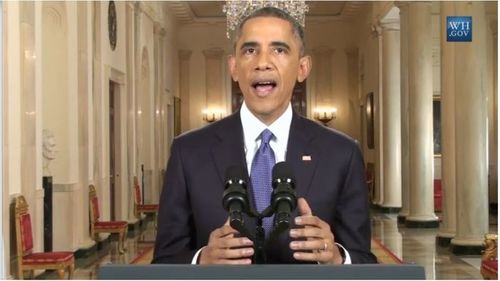 As with most high-profile cases, dozens of amicus briefs were filed both for and against the Obama’s Executive Amnesty. An amicus curiae (friend of the court) brief is filed by a third party interested in the outcome of a case. For example, if two small technology companies has an intellectual property dispute before the Supreme Court that could affect the entire industry, larger technology companies or their trade groups may file amicus briefs. In these types of specialized cases, the briefs can have a major impact. 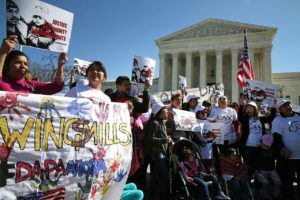 In United States v. Texas, legal scholars, trade associations, politicians, and advocacy organizations filed amicus briefs. For example, Democratic Congressmen and Senators, the AFL-CIO, and the American Immigration Council (a Soros-funded pro-immigration group)filed amicus briefs in defense of Executive Amnesty, while Mitch McConnell and Paul Ryan, Sheriff Joe Arpaio, and the Immigration Reform Law Institute filed briefs against. All in all, there were 19 briefs in favor of Amnesty and 18 against.

Yet it’s not clear that these matter that much to the outcome. Most legal commentators think that in such cases a well-written amicus brief can make a marginal difference, but is unlikely to sway the outcome [Do Judges Read Amicus Curiae Briefs? By Brendan Koerner, Slate, April 1 2003]

Though, to be cynical, I doubt even the parties’ legal arguments will make much of a difference in this case. The Solicitor General’s office could write a barely literate brief and Democratic-appointed justices would still vote for Amnesty. Thomas and Alito are locks to vote against it. And I suspect that the two swing votes, Roberts and Kennedy, will make their decisions based thoughts about their “legacy” and the public perception rather than the legal case.

So why do parties file these briefs? When such an important matter is solely hands of the Court, non-profit advocacy organizations are virtually powerless, and an amicus brief is pretty much the only thing they can do. Moreover, briefs can serve as a springboard for the organization to talk about the issue to the media even if they do not influence the decision. Politicians, of course, use them to grandstand.

Finally, these briefs often have no cost for many non-profits because a large corporate law firm actually writes it pro bono.

And this is where the briefs reveal the truth about the legal industry. While there was nearly an equal number of briefs filed on behalf of each side, the vast majority of the briefs against Amnesty were filed by small law firms or in-house lawyers with conservative non-profits. In contrast, wealthy corporate law firms represented almost every single brief for Amnesty.

VDARE.com readers who don’t care about these firms can skip the next paragraph, but for the partners or clients, these are the Big Law firms and boutiques that filed briefs (linked below) in favor of the executive Amnesty.

I don’t know if every firm conducted this work pro bono, though I suspect the majority did.

In the old days, law firms were not supposed to be responsible for the views or actions of their clients (although, as I discuss below, the Left has recently broken this convention).

That said, if the briefs were not pro bono, it would reveal another problem—the financial imbalance between the patriotic immigration reform movement and the enemies of the Historic American Nation.

I can’t really decide whether it would be worse that McDermott Will & Emery [Tweet them] decided to have three associates and three partners work to write a pro-Amnesty brief on behalf of the National Queer Asian Pacific Islander Alliance, the Trans Queer Liberation Movement; Gay Asian and Pacific Islander Men of New York; The Lesbian, Gay, Bisexual and Transgender Community Center; and The National Center for Transgender Equality for free—or that organizations have enough money to hire such an expensive legal team.

It will be interesting to see if the Left attacks Baker Hostetler over this. It had previously bullied it out of representing Congress in a lawsuit against Obama’s executive actions on health care, with even TV host Jimmy Fallon creating an unfunny fake ad mocking the firm, which had a spokesman for the firm purportedly saying “We can help you waste thousands of dollars in taxpayer money to fight for what you sort of believe in”.

Note that, while liberal organizations often get pro bono assistance, these conservative specialist boutiques are rapidly becoming the only firms who will take on anti-immigration, anti-Affirmative Action and, above all, anything anti-gay-agenda—even for high pay. Thus two of these boutiques, Bancroft and Schaerr Duncan are headed by lawyers who had previously chaired appellate practices for large corporate firms—Paul Clement of King & Spalding and Gene Schaerr of Winston Strawn respectively—but left because their firm would not allow them to represent opponents of gay marriage.

Clement’s departure was especially significant, as he was widely considered the top appellate advocate in the country. King & Spalding had built its practice around him. That it was willing to lose him and many of his clients to appease the homosexual lobby is astounding.

This Reign Of Terror is now spreading to presidential candidates.

Donald Trump has retained Jones Day to handle his election law practice and also held meetings with Senators and Congressmen in Jones Day’s Washington office. So David Lat [Email him], founder of the legal tabloid Above the Law, decided to create a stink about how having "Donald Drumpf" as a paid client conflicts with the firm’s “extensive pro bono work on behalf of immigrants’ rights,” and he found anonymous Leftist associates at the firm to complain about it.

Lat acknowledged that every other candidate had big law representation, that Jones Day represented murderers pro bono, and that one of the foundations of legal ethics is not to judge a firm by its clients. But he somehow concluded that this was scandalous because, hey, David Duke ran for president once too [Will Jones Day Drop Donald Trump As a Client, March 24, 2016]

Big Law firms operate on the business model of maximizing billable hours. The possibility of a contested convention and fights over delegates is no doubt great news for election lawyers, and so Jones Day recently expanded its representation by adding another partner who is a veteran of past delegate battles to Trump’s legal team. Lat expressed his shock!!! that Jones Day had not forced Trump’s attorneys out already, and wrote an article entitled Jones Day Doubles Down On Donald Trump [April 19, 2016]

The Washingtonian continued the attack noting that “Sure, Donald Trump, like everyone, has a right to a lawyer,” but then questioning how they could represent him when “Jones Day, like all large law firms these days, touts its focus on diversity.” [Donald Trump’s DC Law Firm Had a Bad Week, by Marisa Kashino, March 25, 2016]

Jones Day is widely considered the most conservative elite law firm in the country—both in reputation and political donations (though it still had more attorneys give money to Obama than Romney). Nevertheless, it has an extensive pro-Amnesty pro bono program, complete with bromides about diversity on its website. My guess: this was instituted in large part to fend off attacks from the Left—and, ironically, but predictably, it has simply encouraged more attacks.

In the Steven Spielberg movie Bridge of Spies, Tom Hanks plays James B. Donovan, a corporate insurance attorney who represents communist spy Rudolf Abel in the 1950s and early 1960s. In the film, Donovan becomes a social pariah to the narrow-minded anti-Communists who are too ignorant to understand the distinction between advocating for a client and endorsing his actions and views.

For good measure, the filmmakers have some zealous anti-Communists shoot up Donovan’s house, though this never occurred. [Bridge of Spies, History v. Hollywood]

Hanks replies to those suggesting he is supporting communism:

Americans are supposed to look down on this intolerant time and be proud of the progress we’ve made. Yet, in reality, the lawyers representing Communist spies—who, remember, were trying to destroy our very way of life of behalf of a foreign power—received more deference during the height of the so-called "Red Scare," than a law firm who wants to oppose Obama’s unconstitutional Amnesty…or represent the Republican frontrunner and presumptive nominee.