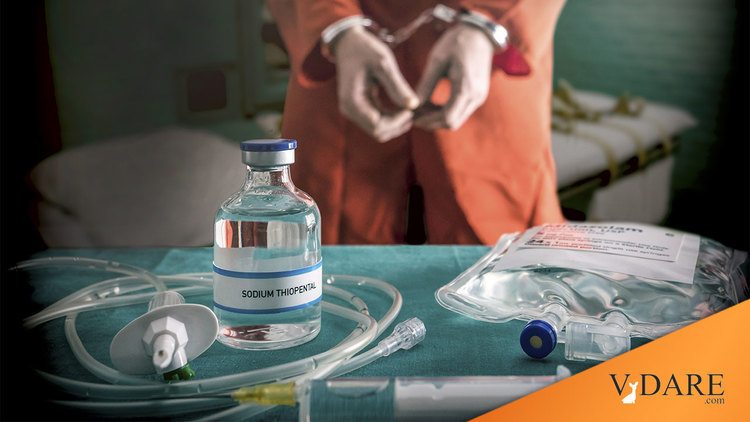 Last week, the Supreme Court held, 7 to 2, that Kentucky's method of lethal injection remains a constitutional way of executing the rapist of a child. Justice John Paul Stevens concurred.

In his opinion, however, Stevens exhilarated liberals by coming out of the closet as a born-again abolitionist of capital punishment.

Said His Honor, it is time to reconsider the "justification for the death penalty itself". Court decisions and state actions that justify it are but "the product of habit and inattention rather than an acceptable and deliberative process".[Baze v.Rees (PDF)]

Enlightened men and women, the justice is saying, will abolish capital punishment as a barbaric relic of a blessedly bygone era.

For his defection to the abolitionist camp, the 88-year-old justice was rewarded with her patented deep massage by Linda Greenhouse, the veteran—and after 30 years retiring—Supreme Court reporter of the New York Times:

"When Justice John Paul Stevens intervened in a Supreme Court argument on Wednesday to score a few points off the lawyer who was defending the death penalty for the rape of a child, the courtroom audience saw a master strategist at work, fully in command of the flow of the argument and the smallest details of the case. For those accustomed to watching Justice Stevens, it was a familiar sight." [Justice Stevens Renounces Capital Punishment, April 18, 2008]

For rolling over on its back, the dog gets its tummy scratched.

To Greenhouse, Stevens' flip on capital punishment, following his flip to favor affirmative action, represents the "culmination of a remarkable journey for a Republican antitrust lawyer".

It sure does. But had Stevens moved from left to right, rather than the reverse, one imagines Greenhouse's enthusiasm for the "master strategist" would have been well contained.

What we see here is a textbook example of what U.S. Judge Laurence Silberman calls "The Greenhouse Effect".

This is the effect on aging and weak-minded Republican justices, like Harry Blackmun, David Souter, Anthony Kennedy, Sandra Day O'Connor and John Paul Stevens, of the lure of fawning publicity, if they will but recant their convictions and embrace the agenda of the left.

The Faustian bargain these justices are offered is favorable media, comparisons to great liberal jurists of yesterday like Louis Brandeis and Hugo Black, and repeated references to how they have "evolved", and "grown", and are being accorded a "strange new respect".

When they accept such media favors, these justices, nominated by Republican presidents to restore constitutionalism to the court, begin to receive ovations at establishment dinners and turn up on the most desirable party lists. Where once they were the "clones of Scalia", suddenly, they are jurists of "independent thought".

Stevens, however, as Greenhouse is swift to remind him, has a ways to go if he wishes to make it to Cooperstown.

"[Stevens'] renunciation of capital punishment in the lethal injection case, Baze v. Rees, was ... low key and undramatic. While reminiscent of Justice Harry Blackmun's similar step, shortly before his retirement in 1994, Justice Stevens' opinion lacked the ringing declaration of Justice Blackmun's 'From this day forward, I no longer shall tinker with the machinery of death.'"

Greenhouse did not mention Blackmun's role in getting the "machinery of death" up and running in all 50 states against unborn children, 50 million of whom have wound up in garbage bags or dumpsters outside abortion mills because of her hero's great decision.

There is another and larger issue here.

It is the question not of what is decided, but of who decides.

Whether Citizen Stevens abhors the death penalty should not matter to Justice Stevens. For if the constitution provides for a death penalty, and capital punishment has been imposed throughout our history, and the form it takes does not violate the ban on cruel and unusual punishment, Stevens' decision should be automatic, no matter his personal beliefs.

What Stevens is signaling, however, is that his altered opinion of the death penalty may cause him to start voting against it—that is, to substitute his personal view of capital punishment for the decision of the elected leaders who have voted to retain it.

But Justice Steven is not, or should not be, the decider. In a democratic republic, that is the prerogative of the majority, through its elected representatives.

It is just such usurpations of power by Supreme Court justices that loosed the culture war that has torn us apart. Repeatedly, justices have imposed their own views and values—on pornography, abortion, school prayer, busing, homosexuality, the death penalty—on the nation, usurping the authority of legislators.

If Stevens has come to believe capital punishment is abhorrent and ought to be abolished, he ought to resign his seat and campaign for its abolition.

But if he exploits his position as a justice to impose his views on a dissenting democracy, Stevens should be impeached.

And he would be, if we had a Congress that cared about its own and the states' right to make such decisions under the Constitution.

Patrick J. Buchanan needs no introduction to VDARE.COM readers; his book State of Emergency: The Third World Invasion and Conquest of America, can be ordered from Amazon.com. His latest book is Churchill, Hitler, and "The Unnecessary War": How Britain Lost Its Empire and the West Lost the World,