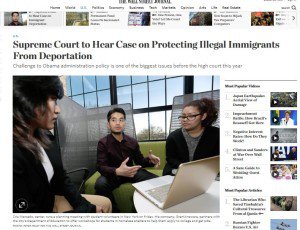 The U.S. Supreme Court hears arguments Monday (April 18) in Texas vs. U.S., the suit filed by Texas and 25 other states against the Obama Administration attempt unilaterally to amnesty certain illegal alien children (DACA) and their parents (DAPA). Only Judge Andrew S. Hanen’s heroic preliminary injunction—not Congress, it should be noted—has been holding up this Executive Branch putsch. Already the Main Stream Media is wall-to-wall sob stories (for example, Supreme Court Hears Case on Protecting Illegal Immigrants From Deportation, by the Wall Street Journal’s veteran Treason Lobby shill Miriam Jordan [email her]April 17, 2016) and the ululations if the Administration loses will be beyond belief. The Roberts Court has shown it can be intimidated, but a glance at the briefs reveals the incoherence of the Administration’s position—and suggests a strategy for immigration patriots if the Court capitulates again.

Incoherence: Remember that in late 2014 and early 2015, Congress made some half-hearted shows of opposition against Obama’s DAPA executive amnesty by threatening to defund the program. At the time Democrats, pro-Amnesty Republicans, and the MSM reacted as if Congress using its constitutionally delineated power of the purse was somehow illegitimate.

President Obama's press secretary said that Obama would not allow the GOP to "muck around with that legislation." Lindsey Graham said his colleagues were “playing with fire here”. [White House: Obama would veto GOP immigration bill, by Eric Bradner, CNN, January 12, 2015] The Center for American Progress accused the GOP of “playing politics with national security funding.” Harry Reid suggested this issue was not even up for debate: "We're happy to debate immigration. There are a lot of issues we would like to debate. But we are not going to do that until the Department of Homeland Security is funded". [Democrats Won’t Debate Immigration Until DHS Funds Are Enacted, by Heidi Przybyla and Billy House, Bloomberg, February 25, 2015]

Thus, imagine my surprise when the Obama Administration’s brief in United States v. Texas, argues that precisely because Congress did not defund DAPA, it has implicitly approved the President’s policy:

Congress has considered a series of bills that would bar implementation of DACA (and later DAPA) or block funding unless they are rescinded, and that would limit the Secretary’s authority to grant work authorization. None has passed both the House and Senate, much less become law. After much debate, Congress instead has enacted two appropriations bills that fund DHS—leaving DACA and DHS’s deferred action and work-authorization authority untouched.

Thus, the attempts to defund Obamnesty were not really just “mucking around,” “playing with fire,” or holding “Homeland Security hostage,” but Congress’s entirely appropriate expression of discontent at an illegal executive action.

I can hear some critics object that the Fifth Circuit blocked DAPA, so we shouldn’t really worry about it. If the Supreme Court upholds the injunction, all’s well that ends well. But if the Supreme Court decides DAPA is legal, some may argue it’s not worth “shutting down the government” over it.

But I suspect that if the Court overturns the Fifth Circuit’s decision to block DAPA, it will be solely based on standing. In other words, the Court will not rule that the Fifth Circuit was incorrect when it said that DAPA was likely illegal. Instead, it will say that the Texas does not have the legal right to sue to block the program.

Thus, the Court will essentially allow an illegal program to stand on the grounds that it is ultimately up to the political branches to redress the offense.

I personally think the Tea Party and “True Conservatives” like Ted Cruz wasted valuable political capital by threatening to shut down the government over trivial issues like Planned Parenthood or on issues which they have already clearly lost, like Obamacare. It’s particularly notable that Ted Cruz shut down the government over Obamacare and likely cost Ken Cuccinelli the governorship in Virginia, yet quickly passed the buck to Congressional GOP leaders McConnell and Boehner during the fight over DAPA, stating it “it’s now up to leadership to give us their strategy”. [Cruz: Cromnibus ‘A Plan That Is Designed to Lose, by Susan Jones, CNSNews, February 9, 2015]

This was completely disingenuous on Cruz’s part, as he created the shutdown over Obamacare against the leadership’s wishes.

It also shows that Cruz is willing to go to the mat for lost causes, but when it comes to a winnable fight over immigration, Cruz was eager to sound retreat.

But there is some good news. The Administration’s brief provides ammunition for Republicans to defund the program. If the Court rules against Texas, especially if it’s on the issue standing, the Senate has no excuse not to fight tooth and nail to end the illegal executive overreach on immigration.

On the note of standing, Texas initially argued, and the Fifth Circuit agreed, that DAPA injured Texas by forcing the state to issue driver’s licenses to its recipients. Conversely, the Administration’s brief in United States v. Texas argues that “neither the Guidance nor any federal law required Texas to subsidize driver’s licenses, issue licenses on the basis of ‘authorize[d]’ presence”—”authorized presence” being DAPA and DACA recipient’s status [page 25].

Interestingly enough, Arizona tried to deny driver’s licenses to DACA recipients. The ACLU, MALDEF, and the usual suspects sued to force Arizona to issue them. Earlier this month, the Ninth Circuit ruled “that the Immigration and Nationality Act pre-empts states from engaging in their very own categorization of immigrants for the purpose of denying some of them drivers’ licenses”. [Arizona Dream Coalition v. Brewer, at 3, April 6, 2016] And, amazingly, the Obama administration filed an amicus brief against Arizona arguing that “Arizona's driver's license policy is pre-empted because it distinguishes among aliens in ways not supported by federal law.”

So Texas is not forced to issue licenses—and Arizona is.

Obviously, these seem like two arguments that contradict each other. I’m sure the Solicitor General’s office managed some complicated mental jujitsu to reconcile the two positions, but even the most activist judge would be wary of ruling that Arizona (who is a co-plaintiff in the DAPA challenge) is required to issue driver’s licenses in one case, but isn’t in another.

I honestly am not sure how the Court will rule in United States v. Texas. As I noted in my Scalia obituary, his death should not affect this case because a 4-4 tie will still block the DAPA. However, I am concerned that Chief Justice Roberts may wish to avoid a tie, and could switch to the liberal side based on a technicality like standing.

Regardless, the decision is out of immigration patriots’ hands right now.

But we should prepare for the contingency that we’ll lose this case. Rather than seething in defeat, we should note the Administration’s own brief has provided an opening for state level action to deny driver’s licenses to illegal aliens.

And after that, we’ll need a federal level push to defund DAPA. Meaning that the so-called “True Conservatives” will actually have to fight on the immigration issue—rather than just offering more talk.