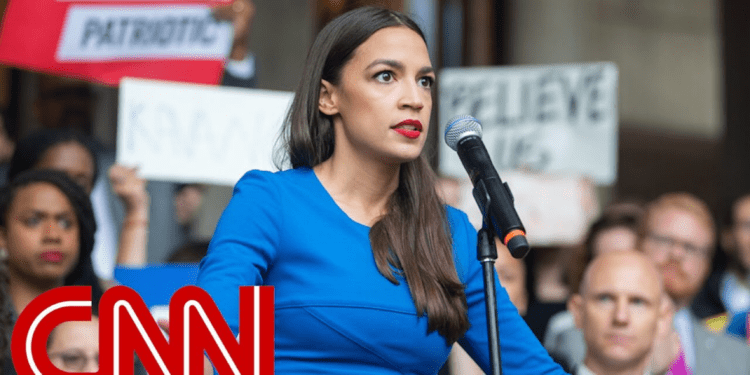 New York Rep. Alexandria Ocasio-Cortez personifies the Democratic Party’s division over immigration. The party’s leadership wants (or wants to say it wants) some border security and immigration enforcement. The party’s radicals, like Ocasio-Cortez, want Open Borders. All Democratic presidential candidates are running with the radicals, demonstrating how much the party has changed. But the general American public is not. Democratic extremism will likely mean more electoral victories for the GOP—but less chance of obtaining funding for immigration enforcement. GOP squishes must realize that “Comprehensive Immigration Reform” (a.k.a. Amnesty) compromise is now impossible. The only response: push aggressive patriotic immigration reform. This is a death struggle.

Or, as Democrat immigration patriot Mickey Kaus wrote recently: “Either we’ll have a continued impasse or one side will win—transforming the country in one direction or the other.”

This clash between the Democratic Establishment and Open Borders enthusiasts came to the fore late last month. AOC criticized her party leaders for passing an emergency border bill that funds immigration enforcement.

There were initially two different versions of the bill, both of which she voted against. The Senate bill, which was eventually passed by both chambers, gave more money to the federal agencies at the border and the Department of Defense [House approves Senate version of border bill after Pelosi yields, by Tanvi Misra, Roll Call, June 27, 2019]. The House bill gave less money and required Border Patrol and the Department of Homeland Security to better serve illegal immigrants. President Trump vowed to veto the House bill if it came to his desk.

Needless to say, neither bill solved the border crisis. They were both bills that would have provided the bare minimum of funding to enforce immigration law. However, Ocasio-Cortez lashed out at her party’s leaders for agreeing to the Senate bill: "Under no circumstances should the House vote for a McConnell-only bill w/ no negotiation with Democrats. Hell no," she said [Ocasio-Cortez: 'Hell no' should House Democrats approve Senate-passed border bill, by Rebecca Klar, The Hill, June 27, 2019]

“If you see the Senate bill as an option, then you don’t believe in basic human rights,” said Michigan Rep. Rashida Tlaib on Twitter.

Ocasio-Cortez and Tlaib also opposed the House bill that included the “protections” she demanded. Both were part of a progressive group that said they could not vote for a bill that "gives even more money to ICE and CBP and continues to support a fundamentally cruel and broken immigration system”. [House to consider $4.5 billion aid bill for migrants at the border, by Grace Segers and Rebecca Kaplan, CBS, June 25, 2019]

“We need to stop funding the detention of children under any and all circumstances,” Ocasio-Cortez said in her own statement to the press. [Liberals angry with Trump administration treatment of migrant children force House leaders to amend border bill, by Mike DeBonis and Rachel Bade, Washington Post, June 24, 2019]

The radicals’ underlying point: Congress should not provide any funding for border security or immigration enforcement. Don’t improve the facilities—shut them down. Don’t arrest border jumpers—let the families in!

This view is not shared by Democratic leaders in Congress. Many of them chided Ocasio-Cortez and her allies for refusing to accept that the Border Patrol needs funding. “All these people have their public whatever and their Twitter world,” House Speaker Nancy Pelosi said of them. “But they didn’t have any following. They’re four people and that’s how many votes they got” [It’s Nancy Pelosi’s Parade, by Maureen Dowd, New York Times, July 6, 2019]

Pelosi and her allies want to see the facilities stay open but made nicer for illegal immigrants. However, while this view prevails in Congress, it’s losing favor among Democratic presidential candidates who have to face their tipped primary voters. Ocasio-Cortez may not have a large following in Congress, but her influence matters more with the Democratic base.

Former Housing and Urban Development Julian Castro ruled the first night with his personhandling of Beto O’Rourke. Castro shamed the former Texas congressman for not wanting to eliminate the law that makes illegal entry a criminal offense.

O’Rourke himself is no moderate: he wants to tear down existing border barriers. But he looked insufficiently radical on the debate stage.

Most candidates followed Castro’s lead the next night and raised their hands in favor of decriminalizing illegal immigration. The one surprising hand: Joe Biden, who then qualified his hand-raise by saying illegals without criminal records “should not be the focus of deportation." [Biden: Undocumented Immigrant Without Criminal Record 'Should Not Be Focus of Deportation', by Rebecca Ballhaus, The Wall Street Journal, June 27, 2019]

Biden also raised his hand to show he supports giving illegal immigrants free healthcare. But again, the former vice president walked back both stances after the debate. In a subsequent CNN interview, he said illegal entry should still be a criminal offense and illegal aliens shouldn’t get free healthcare [Biden Comes Out Against Decriminalization Of The Border, by Jason Hopkins, The Daily Caller, July 5, 2019]

Biden represents the old view of the party. The Democratic Party has overwhelmingly wanted Amnesty and more immigration for at least a decade. But its leaders still claimed to want to deport a sizable number of illegal immigrants and maintain a semi-secured border.

It was a ruse. But Obama would’ve never said illegal immigration should be decriminalized. The migrant detention facilities that the Left derides as “concentration camps” were constructed during his administration [Barack’s ICE chief: Cages were Obama’s idea, by Paul Bedard, Washington Examiner, June 26, 2019]. Obama allegedly deported more illegals than any other president. All of this was done to maintain a moderate image.

As represented by Ocasio-Cortez, they don’t want to compromise with Republicans—they want to crush them. “The older members really cling to the idea that things are going to go ‘back to normal’  [after Trump],” Ocasio-Cortez told the Washington Post. Instead of normalcy, she promises radical action—especially on immigration. [Haunted by the Reagan era, by Ryan Grim, The Washington Post, July 5, 2019]

In contrast, during the Trump presidency, Democratic Congressional leaders have tried to uphold the old ways, deceptive but diplomatic, on immigration. Just last year, they were willing to give him full funding for the wall in exchange for the legalization of illegal aliens who came to the U.S. as minors and their families.

It would be impossible for Congressional Democrats to offer such a deal today. Democrats didn’t even want to give Trump a measly amount for border security in a must-pass budget bill earlier this year. This hard line will only strengthen as Ocasio-Cortez and her allies gain influence.

And the fact is that the increasingly-woke Democratic base is more in-line with the AOC view. In 1994, only 32 percent of Democrats said immigrants strengthen the country. That figure stands at 84 percent today. Remarkably, white “liberals” have the most favorable view of immigrants of any demographic. Eighty-seven percent of white “liberals” believe diversity makes America a better place to live. In contrast, just 54 percent of blacks and 46 percent of Hispanics agree with that statement. [The Great Awokening, Matthew Yglesias, Vox, April 1, 2019]

It’s an easy step from these positions to wanting full decriminalization and free healthcare for illegals. If diversity and immigration are great for America, then it is unjust to get in the way of more diversity and more immigration.

But most Americans are still not Woke/ insane. Nearly 60 percent oppose giving illegals healthcare. [CNN Poll,  July 1, 2019] Seventy-five percent of Americans say they would support a candidate who says “We have a moral duty to create an immigration system that protects the lives and jobs of our citizens.” [Monthly Harvard-Harris Poll: February 2019]

Yet no 2020 Democrat presidential contender could make such a statement. The average 2020 Democrat seems more inclined to say we have a moral duty to create an immigration system that protects the lives and jobs of foreigners first.

All of these developments should be a wake-up call for the GOP/ GAP. Too many GOP lawmakers think a Gang of Eight Amnesty can still be reached with Democrats. The Democratic debates and Ocasio-Cortez should disabuse them. The Democrats’ new radicalism not only makes it harder to obtain basic funding for border security and immigration enforcement—it also means a Democratic president will deport hardly anyone and will allow all of Central America (and God knows who else) to pour through the border.

Republicans must follow AOC’s example. Instead of trying to compromise with Democrats, they should seek to crush them.

An America First immigration policy is far more popular than the Democrats’ America Last policy. Republicans must aggressively pursue the objectives their voters want, Democrats be damned. Build the wall and reduce immigration by any means necessary.

Ocasio-Cortez is right to say the old days are not coming back. Republicans must accept that this is a death struggle—and defend the Historic American Nation from Democratic destruction.