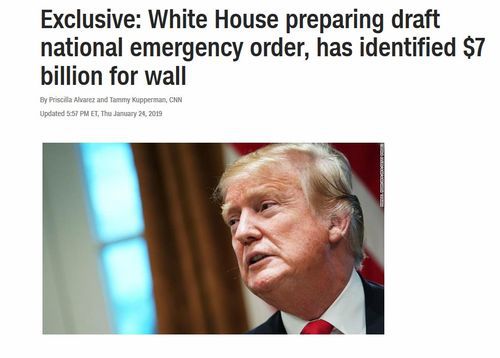 The Democrats Refuse To Deal, So Trump HAS To Declare A National Emergency

President Trump’s last-ditch effort to get money from Congress to pay for the wall ended in defeat Thursday—as expected.

The deal would have extended deportation protection to DACA recipients and thousands of migrants living in America on Temporary Protected Status. All Trump would have received was $5.7 billion for the wall, which is not even close to full funding and no patriotic immigration reforms either.

Fortunately, this idea fell short in the Senate and so did a Democrat offer to end the government shutdown with no money for the wall. Negotiations are currently underway to broker a new deal but it’s clear Democrats would rather keep the government shutdown forever than give anywhere near $5 billion for the wall. [Collapse of Two Plans to End Shutdown Propels Urgent Negotiations, by Julie Hirschfeld Davis, The New York Times, January 24, 2019]

There are a couple of options for Trump. One option is to capitulate to Democrats and offer green cards to DACA recipients just to get the $5.7 billion for the wall. That would be a terrible idea and it’s not clear if Democrats would even accept it. But Jared Kushner (shocker!) is pushing for this idea in spite of it all. Reports fortunately indicate that conservative senators are not pleased with the green card proposal and it looks unlikely to obtain the support of 60 lawmakers for passage. [A "go big" idea to end the shutdown, by Jonathan Swan, Axios, January 23, 2019]

The other option is to sign a bill with less than $5 billion for the wall, but no legalization for Dreamers or TPS holders, and declare a national emergency on the border. CNN reported Thursday that the White House is drafting up the documentation to do such an act and it would potentially appropriate $7 billion from the Defense Department’s budget for the wall. That’s more than the $5.7 billion Trump asked from Congress and he doesn’t have to give any amnesty to illegals. [White House preparing draft national emergency order, has identified $7 billion for wall, by Priscilla Alvarez and Tammy Kupperman, CNN, January 24, 2019]

According to the CNN, Trump’s declaration would cite Title 10 of the U.S. code, which lets the president use earmarked DOD money that has not been contracted yet. This follows the advice House Freedom Caucus Chair Mark Meadows has offered to Trump on how to get the money he needs for the wall. [Mark Meadows’ solution to the border crisis and shutdown stalemate is almost perfect, by JD Rucker, NOQ Report, January 20, 2019]

Of course, Trump’s potential national emergency declaration would face strong legal challenges and could be blocked by the courts. But the president has no other choice but to go this route. He can cave to outrageous Democrat demands and look weak, or he can fight for the wall in court.

The Watcher previously noted that if the DACA protections-for-wall deal failed, it would give Trump the justification for declaring a national emergency. The Democrats rejected his generous offer, and now he must take the next step.

One hopes the CNN report is accurate and the national emergency is declared soon.