Things are looking good for immigration patriots on Capitol Hill. The Senate failed to pass Amnesty. The only immigration bill with serious momentum in the House is the Goodlatte bill, which is relatively acceptable to (most) immigration patriots because it comes with real control measures. And President Trump has not cucked. Now, it’s time for him to take the next step—support a serious legislative effort to put enforcement first, and make it an issue in the mid-term election.

Washington Watcher has repeated this message over and over these past few weeks, but the pattern is more obvious than ever. Congress is unlikely to pass a permanent fix to DACA before the mid-terms. Lawmakers are too divided to compromise and the White House is sticking to a plan that Democrats refuse to accept, resulting in an insurmountable impasse. For immigration patriots, this is a good thing.

Recent events in the Senate exemplify this. Three measures were put forward that would have given permanent legal status to illegal aliens who came to the U.S. as minors. All three failed.

One proposal was a straight Amnesty with no funding for border security or cuts to immigration that only netted a few Republican votes. President Trump’s preferred plan would have given 1.8 million illegal aliens a pathway to citizenship in exchange for $25 billion for a border wall, eradicating the Diversity Visa Lottery and ending chain migration. It received even fewer votes than the straight Amnesty—partly because a significant number of GOP Senators voted against Amnesty in any form.

The third failed bill, championed by the Main Stream Media/ Opposition Party as “common sense immigration reform,” would have set aside $25 billion for the wall—but ditched Trump’s immigration reforms and given more than 1.8 million illegals permanent legalization. Considering how Trump’s most popular slogan is “build the wall,” not “end chain migration,” it looked like this bad compromise had a chance at bamboozling Republicans into signing onto it. But the White House strongly opposed it, and the Senate’s best chance at a DACA fix only earned 54 yes votes.

The three Senate bills represent all of the credible options at making DACA permanent, and all three failed. Democrats think any cut to immigration is a concession to white supremacy and refuse to vote for it — that’s why Trump’s proposal failed to pass. But the only DACA bill Trump will sign is one that meets all of his demands, and Republicans indicate they won’t deviate from the White House line. Republicans and the White House will not accept a straight Amnesty or a more liberal deal than the one offered by the president. 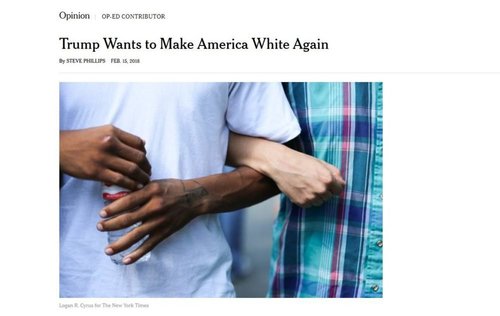 The onus is on Democrats to change their stance and accept Trump’s demands if they want a permanent DACA fix. And that’s highly unlikely to happen. Even though Democrats should know the abolishment of chain migration won’t happen for another 15 years under Trump’s plan, they continue to insist the president’s offer is a “campaign to make America white again.”

Democrat legislators know their Leftist base and immigrant activists will not forgive them if they agree to Trump’s deal. Hardcore progressives appear to prefer having no DACA fix than any reduction in legal immigration. Treason Lobby demagogues like Luis Gutierrez (D-IL) are already livid their party would agree to border wall funding, and they will absolutely not abide a future cut to chain migration. Trump would need tremendous political capital — something he seriously lacks at the moment — to convince Democrats to sell out their base and agree to his offer.

That brings us to the House.

The most popular DACA fix in the lower chamber right now is a much-tougher version of Trump’s proposal [Immigration reform faces high hurdle in the House, by Susan Ferrechio, Washington Examiner, February 20, 2018] Sponsored by Rep. Bob Goodlatte (R-VA), this measure would include the necessary money for the wall, eliminate the diversity visa lottery and end chain migration. It also doesn’t offer a pathway to citizenship to the illegals legalized and insists on mandatory e-Verify and 25 percent cut to legal immigration.

Many Republicans back this bill and the White House has signaled support for it. House Majority Whip Steve Scalise is working on getting the necessary votes to pass it. Squishy Republicans in the House want a more “moderate” DACA fix, but with the failures in the Senate, it’s unlikely the immigration boosters will have their wishes fulfilled.

Still, sources on the Hill told the Washington Examiner this week that the Goodlatte bill is unlikely to pass. Considering the Senate’s own failures, there doesn’t seem much of a reason for House Speaker Paul Ryan to put it to a vote, unless he’s forced to do so for symbolic reasons. But if the House, which prefers the Senate to work out complex deals first, will vote on any DACA bill it will be the Goodlatte bill. Republicans squishes and Democrats are short on other alternatives and Trump might well demand a vote on the bill to reiterate his point that Democrats don’t want a real DACA deal. And if the Goodlatte bill does miraculously pass the House, it will surely die in the Senate.

Besides a symbolic vote on the Goodlatte bill, the only other option for Congress is to mimic its behavior on budget bills and pass a temporary extension on DACA [Congress weighs leaving Dreamers in limbo another year, by Seung Min Kim, Politico, February 5, 2018]. This has a very high chance of passage. There will be enough Republican squishes and Democrats to agree to it if Trump signals his approval. Both sides have an interest in presenting themselves as the ones who truly want a deal and blaming the other side on a failure to agree.

But immigration patriots should take heart from Congress’ utter inability to pass Amnesty. Trump’s insistence on his own bad plan has turned out to be a paradoxical godsend for National Conservatives, who want absolutely no Amnesty. Democrats’ outright opposition to it and Trump’s refusal to consider any other option ensured no DACA fix has made it out of the Senate.

It appears Trump, and Democrats too for that matter, are more interested in milking DACA for political gain than actually making a deal. The president has made this clear in his many public statements [Trump: Democrats ‘have totally abandoned’ DACA, by Ben Kamisar, The Hill, February 23, 2018] chastising Democrats for not wanting a deal on immigration. His initial offer was less of a serious plan to enshrine Amnesty than a political act to show America that Democrats are unreasonable in their demands on immigration.