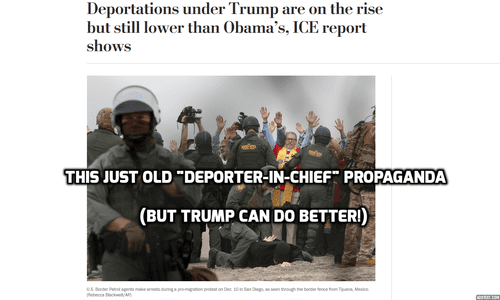 Claim Trump Deporting Fewer People Than Obama Based On False Counting—But Trump Could Do Better!

So, the new deportation statistics are out. Like everything concerning immigration, there is a bodyguard of lies or misdirection surrounding the actual facts and the Trump Administration spin on the whole issue. First, the big lie is that the word "deportation" is no longer used to describe a deportation.

The word is "removal", all thanks to the 1996 Act that substituted removal for deportation. Adding to the confusion is that an alien applying for entry is "refused", not deported. Furthermore under the Obama Regime, there was a cynical attempt to deceive the American people by conflating interior removals with border arrests and removals, resulting in the claim by both the Obama Regime and its left-wing critics that Obama was the Deporter-in-Chief. The truth was that interior arrests and removals declined precipitously under Barack Obama, what your correspondent called the Obama Regime Administrative Amnesty.

Let’s address the current issue, what of the Trump Administration enforcement policy for the last two Fiscal Years (FY), FY 2017 and FY 2018. The press is telling us that not much is going on compared to the Deporter-in-Chief.

U.S. Immigration and Customs Enforcement Deputy Director Ronald Vitello announced Friday that in the past fiscal year, which ended in September, ICE has detained “a record number” of illegal immigrants and that the number of those deported has risen about 13 percent since 2017. The data, which comes from a new agency report, shows that 145,262 of those who were deported were convicted criminals and that 22,796 had criminal charges pending against them.

[Deportations Under Trump Are On The Rise, But Still Lower Than Obama’s, ICE Report Shows, by Lindsey Bever and Deanna Paul, WaPo, December 14, 2018]

These statistics are important for the Obama Regime Administrative Amnesty. Note the steady decline in interior arrests starting in FY 2009, the first partial Fiscal Year of the Obama Regime. They did not hesitate and by FY 2016 interior arrests by U.S. Immigration and Customs Enforcement (ICE), e.g. real deportations, as opposed to arrests and removals at the border by U.S. Border Patrol (USBP) that were credited to ICE.

Note that certain border arrests by USBP are always later credited to ICE as removals, as certain aliens are not immediately removed to Mexico, but held for formal removal proceedings and later removed by ICE. Usually at the border Mexican citizens are arrested by either USBP or ICE, but immediately removed, e.g. a voluntary return, in lieu of formal removal proceedings or an Expedited Removal (ER). Most non-Mexicans are counted in some manner as ICE removals.

Now, the real question is why the Trump Administration has not brought up the interior removals to either an honest 240,000 or a combined removal of over 400,000? Here are the official numbers:

In FY2018, ERO removed 256,086 illegal aliens, reflecting an increase of 13% over FY2017. The majority of removals (57%) were convicted criminals. Additionally, 5,914 of the removed illegal aliens were classified as either known or suspected gang members or terrorists, which is a 9% increase over FY2017.

I could not find out the breakdown of the removals by border and interior. However, given the large number of Special Agents and Deportation Officers ICE has, the number is not any way near the 1 million removals that ICE could be obtaining. That might sound shocking, but doubling the number of removals from the high of 2012 is eminently possible. Certain statistics are here. Perhaps someone more mathematically inclined, John Derbyshire perhaps, can crunch the numbers.

While there might be an increase in deportations, at least slightly, things could be better and there is no reason why not. Time for aggressive action by DHS across the board. Sadly, though, the Trump Administration is rewarding illegals, rather than punishing them.