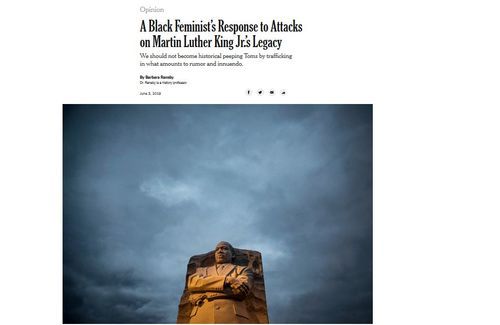 Ann Coulter: The Whole MLK Folk Tale, And Nothing But

New York City public school teachers recently revealed that they have been instructed to reject “objectivity,” “written documentation” and “perfectionism” by Schools Chancellor Richard Carranza, as part of his effort to “dismantle racism.” Carranza identified these values as tools of the “white-supremacy culture.”

Our cultural overlords are way ahead of Carranza. With lightning speed, we've abandoned old, hidebound, Anglo-Saxon facts-and-evidence standards in deference to new, fresh African folk tale standards. (According to J. Bekunuru Kubayanda, writing in the Afro-Hispanic Review, even Latin America and the Caribbean got their oral history traditions from Africa.)

Michael Korda, a lion of the New York literary set, published an admiring biography of Lee just five years ago, Clouds of Glory: The Life and Legend of Robert E. Lee. His book received a favorable review in the New York Times, which chirped that Korda portrayed Lee as a "master strategist" who was "physically fearless."

How can it be that the longtime editor-in-chief of Simon & Schuster and author of dozens of books—not to mention the New York Times itself—totally missed that Lee was a vicious racist, with no redeeming qualities whatsoever? Thank God Nikki Haley's parents emigrated here from India so she could set Korda straight on this country's history!

(Here's an interesting fact about Lee: After graduating second in his class at West Point, he spent several decades overseeing the construction of fortifications on our borders. He rose to fame during the war with—GUESS WHO?—Mexico! Wasn't it great when our military defended our country?)

If any confederate cavalryman had behaved like King, Lee would have had him shot. American folk tale version-cum-Revealed Truth: Lee is Hitler. King is a saint.

It took the New York Times a mere two weeks to report on Garrow's mind-blowing article—an article he had offered to the Times (and dozens of other outlets), but which the newspaper declined to print.

The Times' eventual acknowledgment of Garrow's groundbreaking research began with a column titled, "A Black Feminist's Response to Attacks on Martin Luther King Jr.'s Legacy." The author attacked Garrow's "irresponsible account, drawn from questionable documents." (Yes, that would be the treacherous "written documentation"!)

This was followed by a news story on Garrow's findings that bristled with denunciations of ... the rapey minister? NO! Denunciations of Garrow for reporting what his research had uncovered. The Times even resurrected a 2002 incident at Emory Law School when Garrow was accused of abusively grabbing the wrists of a school official.

Wikipedia has still not added the new information to King's entry. Folk tales take precedence over the written documentation favored by "white-supremacy culture."

In our new objectivity-free country, it was an act of indisputable racism for Trump to question whether President Obama was born in America. He may as well have screamed the N-word.

Even Trump's loyal little defender, presidential adviser Jared Kushner, refused to deny in an interview this week that Trump's "birtherism" was racist. (No wonder his father-in-law thinks he's a girl.)

How about the "birthers" against John McCain, who made an issue of his being born in the Panama Canal Zone? Was that racist? NO! Do you see anything about McCain in the folk tale?

What about Chester Arthur, the 21st president of the United States, whose American citizenship was widely challenged on account of his Canadian parentage?

Please! Do not bother us with your "written documentation" about McCain or Arthur! This is America 2019; we live by folk tales.

Apparently, we must also be bombarded with fictional "documentaries" and TV series re-telling the left's Central Park Rape fantasy. Instead of an evidence-based approach to determining guilt, today we rely on story-tellin' to get at the truth.

Thus, according to lore, in 1989, five black and brown choirboys were framed by a racist New York Police force and a racist district attorney's office for the attack on the Central Park jogger.

Unfortunately for the choirboys, the two juries that pronounced them guilty were not allowed to consider fictional movies, but were stuck with the now-discredited facts-and-evidence method. So it's been a long, hard slog, getting the fable to be accepted as Truth. It's probably going to take a few more movies.

This week, the "oral tradition" of the Central Park wilding as told in the debut of Ava DuVernay's Netflix series, "When They See Us," forced the chief sorcerer—er, prosecutor—Linda Fairstein to resign from the boards of three charities and Vassar College. As one of the convicted, then "exonerated," rapists said, "Even if it's 30 years later, she has to pay for her crime."

The actual evidence against the convicted rapists was, and remains, overwhelming, as I have described repeatedly in columns and in my book, Demonic: How the Liberal Mob Is Endangering America. Evidently, I will be forced to continue restating the facts periodically, in some third-world version of Nietzsche's eternal recurrence.