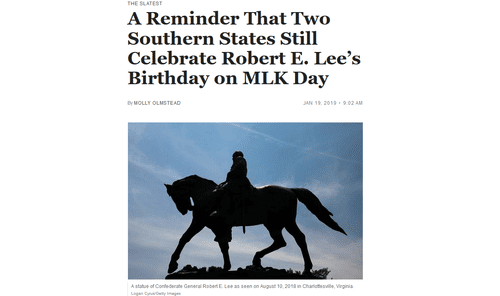 Robert E. Lee Day In Alabama And Mississippi, And SLATE Is Shocked

Robert E. was born in Stratford, Virginia, on January 19, 1807. In spite of the modern-day hate for the Confederacy, it's still celebrated in two states.

On Monday, when the rest of the country is taking the day off in commemoration of one of America’s civil rights heroes, the denizens of two states will get a remarkable choice: You can celebrate the birthday of Martin Luther King, Jr., or you can celebrate that of Confederate General Robert E. Lee.

In Mississippi and Alabama, those days are officially the same, and the civil rights icon and the commander of the Confederate army are celebrated jointly, as two equally noble characters of American history. In Alabama, Lee gets first billing. (Mississippi downplays Lee in official documents). The two states have celebrated Lee’s birthday since the 1800s and began celebrating King’s in 1983.

Many in those states who defend the decision to honor Lee with King do so by whitewashing Lee’s actions and beliefs. In building upon Lost Cause myths and narratives, Lee’s defenders portray him as a reluctant hero, an honorable man who only with a heavy sadness took the job out of a sense of duty to protect his beloved South. Some will insist that he despised the institution of slavery, and others will emphasize he treated his slaves humanely. The reality, though, is this: Lee led an army—an army that conducted “slave hunts” of free black Americans and massacred black Union soldiers who tried to surrender—against the United States in an uprising for the explicit purpose of maintaining the institution of slavery. And while he was not the most ardent defender of slavery (he once wrote that slavery was a “moral & political evil” but also complained it was “a greater evil to the white man” and that black people needed to be enslaved in order to become civilized), he still ordered his slaves whipped and families separated. After the war, he continued to fight against efforts to give black Americans rights. [More]

Alld of these things can be explained for defended, but instead,  I'll just note that there are many bad things to be said about Martin Luther King (we have a complete list in VDARE.com Coverage Of Martin Luther King) none of them noted by Slate.

The thing that compares best to the accusations against Lee is Martin Luther King's support for the enemy in the Vietnam War.

On April 4, 1967, King gave a speech, "Beyond Vietnam — A Time to Break Silence," at New York City's notoriously leftwing, Upper West Side Riverside Church, in which he denounced America as "the greatest purveyor of violence in the world today — my own government," and the killer of women and children.

And more than fifty years after King's 1967 speech, and partly as a result of it, the people of Vietnam are still de facto slaves.