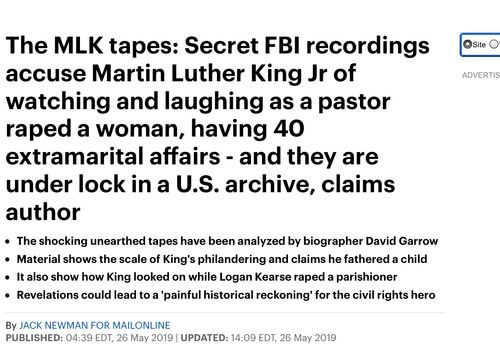 And Then They Came for MLK ...

Writing in British magazine Standpoint, Garrow says that the shocking files could lead to a ‘painful historical reckoning’ for the man who is celebrated across the world for his campaign against racial injustice.

It’s interesting that there apparently wasn’t much interest in this topic in the U.S. media world that Garrow, an American writer, is publishing in Britain.

Along with many US civil rights figures, King was subject to an FBI campaign of surveillance ordered by Director J Edgar Hoover in an effort to undermine his power amid fears he could have links to the Communist Party. …

The FBI surveillance tapes detailing his indiscretions are being held in a vault at the U.S. National Archives and are not due for release until 2027.

But David Garrow, a biographer of King who won a Pulitzer Prize for his 1987 book Bearing the Cross about the Baptist minister, has unearthed the FBI summaries of the various incidents.

So Garrow hasn’t listened to the tapes, but he has read FBI agents’ write-ups of the contents of the tapes, which doesn’t seem all that definitive. This doesn’t sound too new overall, but apparently there are new details.