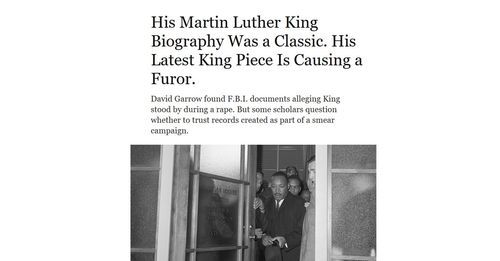 From: David in TN [Email him]

There is a piece today in the NY Times on the Garrow-King Affair. [His Martin Luther King Biography Was a Classic. His Latest King Piece Is Causing a Furor, June 4, 2019]

"People will not know the historical verdict until 2027," when the tapes are unsealed, he said. "This is a warning message as to what's coming."

Garrow has been one of the left's favorite historians for decades, but he grasps what other don't: that this is on tape, and the tapes may include, as the FBI told JFK, King laughing as one of his companions commits forcible rape.

It is obvious to everyone that there is a reason King’s FBI files were sealed for fifty years back in 1977, and only the Main Stream Media’s typically relentless Politically Correct air cover prevented this flagrant maneuver from discrediting the Martin Luther King Day legislation in 1983.[More]

At the time, Peter was thinking more of King's relationships with Russian Communists than forcible rape.  See also my When Records Are Sealed: A Meditation On Martin Luther King Day, for some stuff about unsealing things.