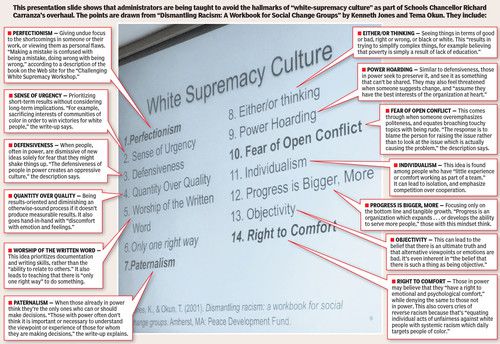 City Department of Education brass are targeting a “white-supremacy culture” among school administrators — by disparaging ideas like “individualism,” “objectivity” and “worship of the written word,” The Post has learned.

A presentation slide obtained by The Post offers a bullet-point description of the systemic, supposedly pro-white favoritism that Schools Chancellor Richard Carranza claims must be eradicated from the DOE, and provides just one insight into his anti-bias training efforts.

The list — derived from “Dismantling Racism: A Workbook for Social Change Groups” by Kenneth Jones and Tema Okun — names more than a dozen hallmarks of “white-supremacy culture” that school administrators are expected to steer clear of. …

“It requires discomfort,” said Matt Gonzales, who serves as an outside adviser on the DOE’s school diversity task force and is a director of New York Appleseed, an advocacy group for school integration.

“Having to talk about someone’s own whiteness is a requirement for them to become liberated.”

… But Carranza said on Monday that such skeptics often don’t realize their own biases until they are forced to confront them and that they are likely the ones who need the training the most.

“It’s good work. It’s hard work,” Carranza said. “And I would hope that anybody that feels that somehow that process is not beneficial to them, I would very respectfully say they are the ones that need to reflect even harder upon what they believe.”

But one Manhattan middle school teacher who underwent mandatory implicit-bias training in December said … “It feels like I’m in a dystopian novel where all of a sudden being white is bad. All of a sudden, I’m the enemy.”

Carranza’s consistent argument is that, in effect, It’s All About The Bell Curve: either you are one of those vicious racists who suspects Herrnstein and Murray are right or you need to enlist in his crusade against whiteness:

Confronting the Elephant in the Classroom

… At the elite Stuyvesant High School, for example, just 3 percent of this year’s incoming students are black.

Stuyvesant is 74% Asian, but let’s talk about evil whiteness.

“In a city like New York City, with a public school system like New York City’s system, how can that be OK?” he asked. “Either the students are biologically, genealogically, psychologically incapable of being admitted to a school like Stuyvesant – or perhaps there are systems and structures to identify students for that opportunity that are not calibrated to who our students are.” …

To supplement the learning initiatives, Carranza has mandated that 125,000 teachers, administrators and other members of the city-wide instructional staff participate in anti-bias training between now and 2022.

He said the training is designed to help teachers and administrators see one another, students and parents “as people, not as a demographic. This is a powerful way to break down stereotypes.”

Or to stereotype white people as The Enemy …

Keep in mind that there aren’t many white students even left in New York City public schools (just 15%), with whites only the 4th biggest group. But the psychological beatings will increase until morale improves.

The distinctive jargon deployed in these training sessions are rooted in a successor ideology that is being mandated from above in universities and foundations.

Once confined to marginal academic departments, these concepts will sweep through institutional liberalism. …There are those who insist that the successor ideology is merely a manifestation of the yearning for equality among college students or marginalized voices on social media. They are simply mistaken. It is the new language of power throughout the non-profit sphere. …

The successor ideology is what happens when ideas meant to encourage critical self-reflection become a part of an echo chamber and grow increasingly divorced from reality.

The list takes on the coloration of every romantic, reactionary, and left-wing shibboleth ever created.

From eco-feminism to Carlos Castenada to Carol Gilligan to German Romanticism, there isn’t a single woolly-headed critique of Western philosophy that isn’t thrown willy-nilly into this stew and presented as authoritative, despite the obvious internal inconsistency.

You can believe in any soft-major world-view you want, from the most intellectually distinguished to the most crackpot, as long as you subscribe to Hate Whiteyness.

The successor ideology as an amalgam of all of these disparate and contradictory fringe beliefs is a feature, since it shields critique and any coherent interrogation of the ideology’s roots and core goals and motivations.