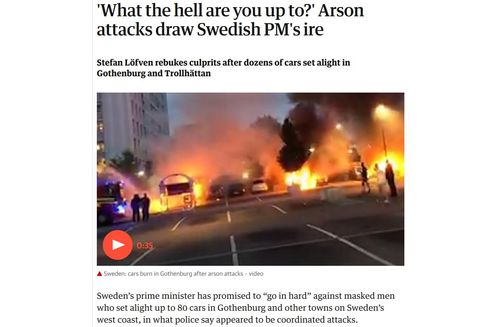 "Swedish PM Asks Arsonists 'What the Heck Are You Doing?'"

Swedish PM asks arsonists ‘what the heck are you doing?’ setting fire to cars

Masked young people torched dozens of cars overnight in Sweden and threw rocks at police, prompting an angry response from the prime minister, who asked “what the heck are you doing?”

Lippens added that because the fires started within a short period of time, “we cannot exclude that there is a connection between the blazes”.

Swedish prime minister Stefan Lofven lashed out at the perpetrators, asking them “what the heck are you doing?” …

In an interview on Swedish radio, he said he was “really getting mad” …