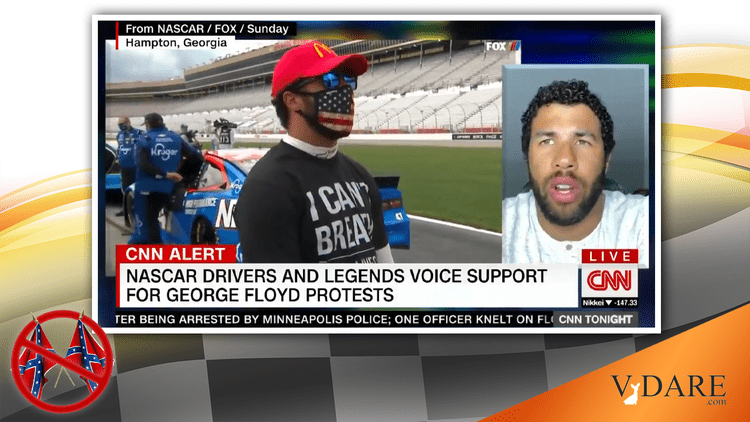 See earlier by Paul Kersey: Thought For The Daytona 500: Will Diversity Kill NASCAR?

It appears the answer to Paul Kersey’s 2012 question above is yes. Diversity might well kill NASCAR, or at least send its patriotic, middle-class, Trump-loving fans to look elsewhere for big-time racing. A few days ago, NASCAR not only banned the Confederate battle flag beloved of its fans but also dropped the requirement to stand for the National Anthem. And why was that? Because winless black driver Bubba Wallace said it had to.

What’s happened to NASCAR? Corporate cowardice and kowtowing to Black Lives Matter, that’s what. So yet another American institution has betrayed its fans in exchange for the approval of the leftist Mainstream Media, ruling class elites and their black proxy warriors who want to exterminate the Historic American Nation.

Whether Historic American Nation fans go along remains to be seen. But given that NASCAR is a Southern invention, its drivers mostly white men, and its fans mostly white men and women, the anti-white, anti-American, anti-Southern move might not work out too well.

NASCAR races always open with a prayer and salute to the American flag, and events are festooned liberally with the St. Andrew’s Cross that Confederate fighting men carried into battle. Despite events of the past few years, the racing outfit was holding its own against the larger, anti-white diversity movement and cancel culture.

As President Trump tweeted on Sep. 25, 2017: “So proud of NASCAR and its supporters and fans. They won't put up with disrespecting our Country or our Flag — they said it loud and clear!”

So proud of NASCAR and its supporters and fans. They won't put up with disrespecting our Country or our Flag - they said it loud and clear!

Several NASCAR team owners agreed. Said Team owner Richard Petty, “Anybody that don’t stand up for that ought to be out of the country. Period. If they don’t appreciate where they’re at … what got them where they’re at? The United States” [NASCAR owners side with Trump, take firm stance against anthem protests, by Brant James, USA Today, Sep. 24, 2017].

On April 30, 2019, Trump invited 2018 NASCAR Champ Joey Logano, his wife, team owner and his Ford Fusion #22 to the White House. In February, the Trumps attended the Daytona 500. Trump was Grand Marshall. The race was completed the following day, with the president absent, but he tweeted his support for an injured driver.

Then came the George Floyd riots and NASCAR’s surrender on the flag and anthem, which was probably inevitable not only because of the riots and ensuing moral panic but also NASCAR’s race to prove its diversity bona fides with Drive for Diversity, a quota program launched in 2004 to bring in non-white and women drivers.

The results are underwhelming:

Booted from NASCAR after the usual apology, Larson is driving well in the World of Outlaws Sprint Car Series.

In other words, Larson aside, Drive for Diversity is a sputtering jalopy that hasn’t done much except embolden those who hate NASCAR fans and the Historic American Nation they represent.

Enter Wallace, the MSM’s new hero, not for winning a race but instead for becoming a Social Justice warrior.

On June 7 at a race in Atlanta, after a week of BLM-inspired arson, looting, rioting, and murder, Kirk Price, a black technical inspector, knelt during the anthem and raised a fist salute [NASCAR official opens up about taking a knee for national anthem, prayer by Michelle R. Martinelli, USA Today, June 8, 2020].

At the same race, Wallace showed up wearing a shirt reading “I Can’t Breathe—Black Lives Matter.”

Bubba Wallace, driver of the #43 McDonald's Chevrolet, wears a "I Can't Breath - Black Lives Matter" T-shirt during the national anthem prior to a NASCAR event in Hampton, Georgia. https://t.co/yE190Yy6Ov pic.twitter.com/TCRcB1YKDg

On June 8, CNN’s Don Lemon gave Wallace his chance to bash the Confederate battle flag with an introductory video of white drivers in a Maoist Struggle Session.

We are trying to figure out next steps and my next step would be to get rid of all Confederate flags.

There should be no individual that is uncomfortable showing up to our events to have a good time with their family, that feels some type of way about something they have seen, an object they have seen flying. No one should feel uncomfortable when they come to a NASCAR race. So it starts with Confederate flags, get them out of here, they have no place.

Of course, no one was uncomfortable, including Wallace, who admitted the flag didn’t bother him until he was “educated:”

But diving into it and educating myself, people feel uncomfortable with that. People will talk about that. That’s the first thing they will bring up. So there’s gonna be a lot of angry people that carry those flags proudly. It’s time for a change. We have to change that. ...

That’s just the start of what we need to do.

“Just the start” sounds rather ominous, but anyway, NASCAR received the message from its new master loud and clear and made this statement:

The presence of the Confederate flag at NASCAR events runs contrary to our commitment to providing a welcoming and inclusive environment for all fans, our competitors and our industry. Bringing people together around a love for racing and the community that it creates is what makes our fans and sport special. The display of the confederate flag will be prohibited from all NASCAR events and properties.

NASCAR wasn't using the flag officially. Fans bring them, and they were a fixture in the RV parks that are a large part of the NASCAR experience.

Like most Americans with an affection for the battle flag, most NASCAR fans are patriots who love the Star Spangled Banner, flag and song, which means they won’t cotton to this news, either: “NASCAR has removed guidelines that team members must stand for the national anthem, opening the way for peaceful protests during pre-race ceremonies” [NASCAR to allow peaceful protests during national anthem, by Dustin Long, NBC Sports, June 10, 2020].

On June 10, the same day NASCAR announced its battle-flag ban, Wallace was the big star in Martinsville, Virginia—but again, not because he won the race. Rather, he appeared with a Black Lives Matter car and his “I Can’t Breathe” shirt. It was an historic night, we were informed, because NASCAR had finally banned the dreaded flag [Martin Truex Jr. wins Martinsville Cup race on historic night for NASCAR, by The Associated Press, USA Today, June 11, 2020].

So now, NASCAR, formerly somewhat apart from corporate-controlled professional sports, has joined the long line of those groveling before Black Lives Matter. So, too, did Richard Petty Motorsports on Twitter:

The Lemon-Wallace interview was possibly  a set-up to push NASCAR across the BLM finish line, but anyway, NASCAR has been having engine trouble for some time in declining ticket sales and sponsorships [Why Americans have fallen out of love with NASCAR, by MacKenzie Sigalos, CNBC, May 27, 2018].

On June 10, the stands were empty thanks to the Chinese Virus. But what happens when the stands open again?

Whatever happens, just like Corporate America, NASCAR has betrayed its fan base and the Historic American Nation. Whatever the PR people say, that isn’t likely to halt its decline.

Those who run NASCAR  deserve whatever economic harm comes from their kneeling before BLM and its fake “systemic racism” narrative.  It's too bad for the fans though.