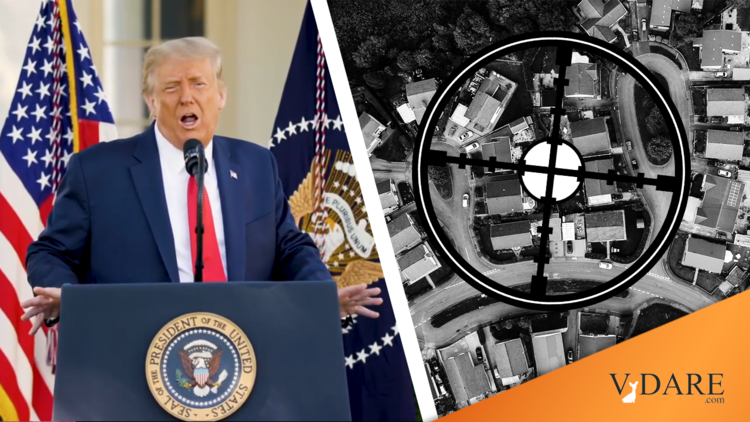 Trump To The Economic Club: Dems Will Abolish Immigration Enforcement, Safe Suburbs—"Millions Of People Would Flood Into Our Country"

Earlier: Trump's Defense Of The Suburbs Against Obama-Legacy Social Engineering Is TERRIFYING To Democrat-MSM Complex and Biden Vows To Rip Out Roots Of Systemic Racism, i.e. Seize The Equity In Your Home

Trump spoke via video to the Economic Club of New York. Here's he's hitting the Dems immigration  plans...and their plans to ruin the mostly white suburbs with AFFH.

The Democrat platform would suspend all immigration enforcement and give free healthcare and mass amnesty to illegal aliens. The problem is our country can't afford it, and as soon as you announce that, millions and millions of people, despite the wall, which is almost finished and by the way, paid for by Mexico, despite all of these things that we've done, millions of people would flood into our country.

This would obliterate Medicare and would totally demolish your social security. Democrats in Washington are also pushing a plan to abolish the suburbs by eliminating single-family zoning and linking federal highway grants to a federal takeover of local zoning. Your suburbs will be gone. The American dream will be gone.

This plan will devastate the property values of millions of middle-class homeowners, including the majority of African-American Hispanic, American, and Asian American households who live in the suburbs. The policies of the left would unleash a lasting economic catastrophe of unimaginable proportions, and I know I'm speaking to some Democrats, and some of you are friends of mine, you will see things happen that will not make you happy.