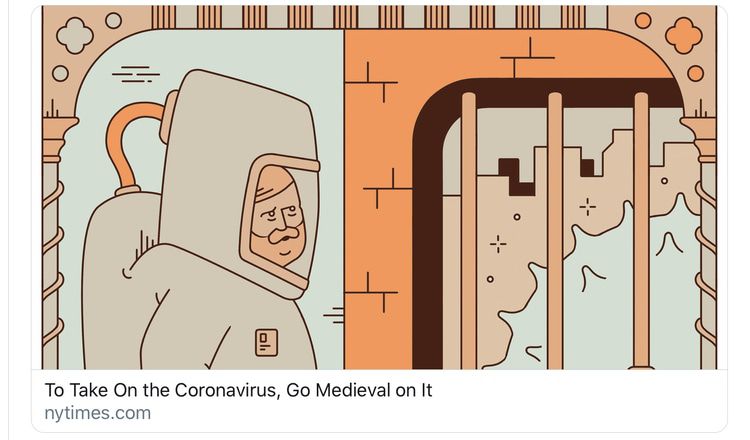 To Take On the Coronavirus, Go Medieval on It
Quarantines and restrictive measures served a purpose in the old days. They can now, too.

By Donald G. McNeil Jr.
Mr. McNeil is a science reporter for The New York Times and has covered epidemics since 2002.

I’ve asked this before, so the answer is, I guess, that Donald G. McNeil, the NYT’s epidemics reporter, is not related to William H. McNeill, author of the highly influential 1976 history book Plagues and Peoples.

There are two ways to fight epidemics: the medieval and the modern.

The modern way is to surrender to the power of the pathogens: Acknowledge that they are unstoppable and to try to soften the blow with 20th-century inventions, including new vaccines, antibiotics, hospital ventilators and thermal cameras searching for people with fevers.

The medieval way, inherited from the era of the Black Death, is brutal: Close the borders, quarantine the ships, pen terrified citizens up inside their poisoned cities.

For the first time in more than a century, the world has chosen to confront a new and terrifying virus with the iron fist instead of the latex glove.

At least for a while, it worked, and it might still serve a purpose.

The Chinese leader, Xi Jinping, was able to seal off the city of Wuhan, where the Covid-19 outbreak began, because China is a place where a leader can ask himself, “What would Mao do?” and just do it. The bureaucracy will comply, right down to the neighborhood committees that bar anyone returning from Wuhan from entering their own homes, even if it means sleeping in the streets.

The White House, in defiance of recent American history, also opted to go medieval by aggressive measures like barring entry to non-Americans who were recently in China and advising Americans not to go to China or South Korea. …

This has led to much consternation among other public health experts, who argue that travel restrictions can cause more panic, misery and death than they prevent. Crowds may besiege hospitals, supercharging the infection rate. Closed borders can cut off vital medications like insulin. Factory and shop closings mean lost wages, hardships and possibly recession.

Officially, the World Health Organization opposes travel and trade restrictions. It reiterated that even as it declared the epidemic a global emergency on Jan. 30.

But it now admits that they helped. The head of the W.H.O. team that visited China said this week that China “took one of the most ancient strategies and rolled out one of the most ambitious, agile and aggressive disease-containment efforts in history.”

The W.H.O.’s epidemic-modeling teams concluded that travel restrictions had slowed the spread of the virus outside China by two to three weeks. …

Harsh measures horrify civil libertarians, but they often save lives, especially when they are imposed in the early days.

Meanwhile, the United States took a pro-legal-rights approach. Even offering an H.I.V. test was made illegal without a separate counseling session, which scared many away from testing. Although gay bathhouses were epicenters of transmission, there were long divisive fights over closing them.

After triple therapy was developed in the mid-1990s, most Cuban camps closed.

But the difference in lives saved by choosing brutality over freedom was stark: Cuba’s H.I.V. infection rate was for decades about one-sixth that of the American one. New York City and Cuba have roughly the same population. In the epidemic’s first 30 years, fewer than 2,500 Cubans died of AIDS. Over 78,000 New Yorkers — mostly gay men — did. …

In 1918 and 1919, as the Spanish influenza swept across the country in waves, various cities reacted in their own ways.

In cities like Philadelphia and Pittsburgh, which were paralyzed by political feuds or pressure from local businesses to avoid shutdowns, many more ultimately died.

Here’s a technical question: How useful in this particular crisis is decelerationism? The respectable opinion has mostly been that it is inevitable that the infection gets into the United States so we should just keep the globalization pedal to the metal, because in the long run we’re all dead so whaddaya whaddaya?

My natural instinct, in contrast, is to try to decelerate, to spread the bad effects out longer. For example, we’ve got about a million hospital beds in this country, with a large fraction already in use every day. If the hospitals overflow, then things get very bad.

There are also reasons to be optimistic about next year or the year after for getting a vaccine.