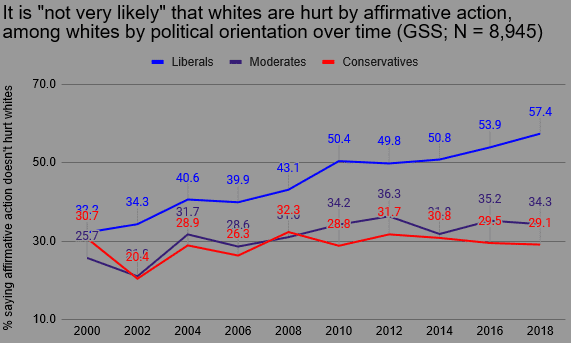 The percentages of non-Hispanic whites, by political orientation, who think it is “not very likely” that whites suffer negative consequences like lost job opportunities from affirmative action policies: 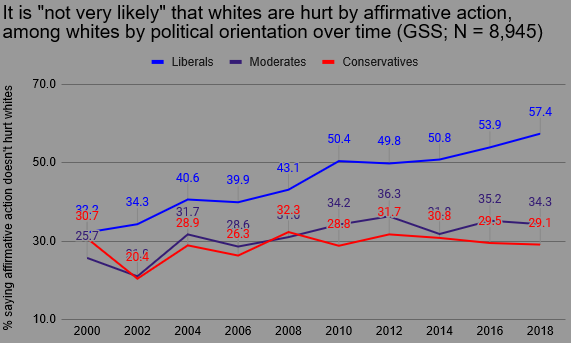 Twenty years ago, only one-in-three whites across the political spectrum deemed it unlikely for whites to pay a price for affirmative action policies aimed at benefiting non-whites. The sentiments of white moderates and white conservatives haven’t changed much in the intervening decades, but those of white liberals have shifted dramatically. This meshes with other characteristics of The Great Awokening, but the shift preceded it. The (hope and) change really got going with president Obama’s election.

Magnanimously, perhaps the thinking is that while individual whites may suffer from being passed over in favor of less qualified non-whites for jobs or promotions, the end result is a society in which systemic oppression of racially informed old boy networks has been dismantled and everyone is ultimately better off. But for this to be realized, companies and institutions must currently be making irrational hiring and promotional decisions that hurt the bottom line. So much for profits-before-people.

Parenthetically, my read is that companies and institutions are increasingly making irrational hiring and promotional decisions that hurt the bottom line, but the errors are directionally the same as the ones that affirmative action policies facilitate, and that the decisions those errors result from do not need de jure support to have their de facto effects.