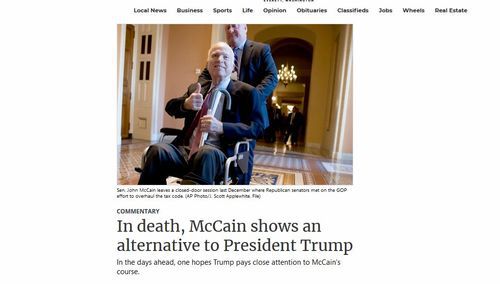 The highly emotional celebration about the life of John McCain has seemed overdone, but there are reasons for that. Democrats were big admirers of the Arizona senator because he was more one of them than any sort of Republican. So Democrats were enthusiastic in their praise, perhaps hinting that other Republicans should be more like him (and them).

Senators McCain and ultra-liberal Ted Kennedy were pals and totally sympatico on mass amnesty for millions of foreign lawbreakers. 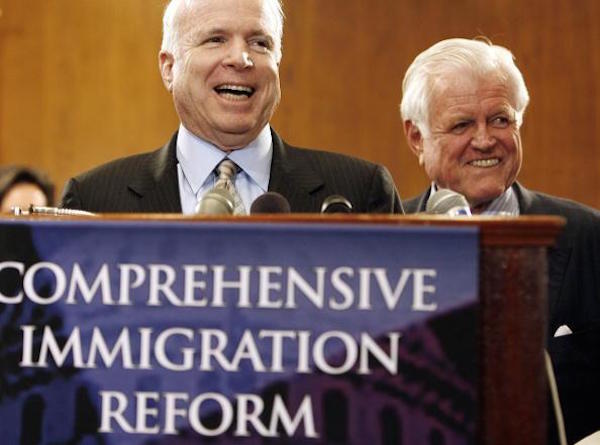 During a 2008 campaign speech to La Raza, McCain said, “I helped author with Senator Kennedy comprehensive immigration reform and fought for its passage not one but twice.” [Watch.]

NumbersUSA gave McCain a lifetime grade of D for immigration reduction, with an F- for this Congress.

Another reason why liberals came out strong in their McCain acclaim was the opportunity to bash President Trump in comparison:

Carter Eskew in the Washington Post was not subtle:

In the days ahead, one hopes Trump pays close attention to McCain’s course.

In death, Sen. John McCain is about to exact revenge on President Donald Trump.

As McCain, R-Ariz., ascends to heaven on an updraft of praise, Trump’s political hell on Earth will burn hotter. Through the wall-to-wall coverage of McCain’s life, and his memorial and burial that will take place over the next few days, Trump will become a bystander as our nation is given a reminder of the best of what it stands for, and the best of what it can be. The president and the rest of America are about to look in the mirror and see Trump’s opposite.

McCain lived a life of service to country; Trump lives in service of self. McCain exemplified sacrifice; Trump, indulgence. McCain played down his heroism; Trump boasts of imagined rescues into school buildings to save children from gunfire. McCain sought reconciliation with his enemies; Trump thrives on creating new ones. McCain was, in the words of his longtime aide and collaborator Mark Salter, a “romantic about his causes and a cynic about the world.” Trump is a cynic about both. (Continues ad nauseum)

David Leonhardt of the New York Times bashed the entire Republican party in his column about McCain:

Today’s Republican Party is the biggest threat to the country that McCain served and loved. He offered an alternative.

John McCain was no moderate. He won Barry Goldwater’s Arizona seat in 1986 and was, for the most part, a fitting heir to Goldwater. McCain supported a smaller federal government, a hawkish foreign policy and the typical Republican positions on abortion, guns and other issues.

But McCain pursued his conservative ends through means that are depressingly rare in today’s Republican Party. McCain believed in the American ideals of pluralistic democracy.

The absolutism and radicalism of today’s Republican Party is the biggest threat to the country that McCain served and loved. It has left the United States impotent to deal with our greatest challenges — inequality, alienation, climate change and a global drift toward autocracy. Congress, as McCain said last year, is “getting nothing done.” Meanwhile, threats to American power and interests grow.

I expect the Trump presidency to end poorly for Republicans, in some combination of disgrace, unpopularity and defeat. If it does, at least some Republicans will be looking for ways to reinvent their party. They will want an antidote to Trumpism, a set of ideas that manage to be conservative and anti-Trump.

What would a Republican Party more in the mold of John McCain look like?

It would, for starters, stop cowing to Trump and stand up for American national security. It would investigate Russian cyberattacks and the possibility, as McCain put it, “that the president of the United States might be vulnerable to Russian extortion.” Many of McCain’s colleagues remembering him as a brave patriot are proving themselves to be neither.

Second, a more McCain-like Republican Party would understand that racism is both immoral and, in the long term, politically ruinous. McCain had a multiracial family — the kind that is increasingly America’s future. Rather than scapegoat immigrants, he took risks to pass immigration reform. After Charlottesville, he declared, “White supremacists aren’t patriots, they’re traitors.” (Continues)

Interesting transition there at the end. Apparently Leonhardt connects white supremacism with the duty of a citizen-elected government to protect borders and sovereignty. That’s a rather broad jump, even for a liberal columnist.