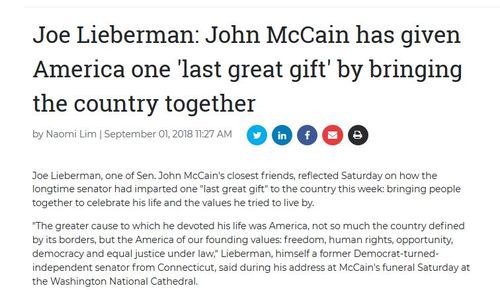 Lieberman: McCain Defended Not America's Borders, But Its Borderless Values

Oh, well, I thought I was done blogging about John McCain, but he is the gift that keeps giving:

Joe Lieberman: John McCain has given America one ‘last great gift’ by bringing the country together
by Naomi Lim
| September 01, 2018 11:27 AM

“The greater cause to which he devoted his life was America, not so much the country defined by its borders, but the America of our founding values: freedom, human rights, opportunity, democracy and equal justice under law” …

McCain revealed earlier in 2018 in his last memoir, The Restless Wave, that he regretted not being able to choose Lieberman as his running mate in the 2008 presidential election.