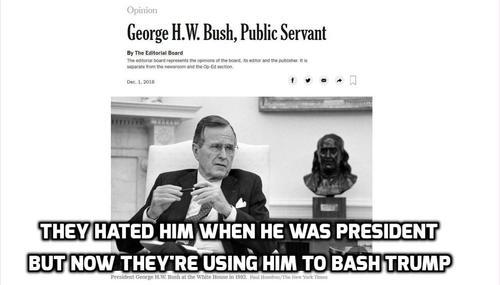 Michelle Malkin: Democrats Will Use Any Dead Republican (That They Hated When He Was Alive) To Bash Trump

Impolite question, but it needs to be asked: Is there a Republican dead body that left-wing partisans won't use to bash Donald Trump?

This week's partisan corpse abusers callously exploited the passing of George H.W. Bush, America's 41st president, to get in their digs at the current commander in chief. Their vulgar level of incivility was inversely propositional to their sanctimonious calls for decency.

"The View's" Joy Behar rudely and crudely soiled the ABC show's tribute to the 94-year-old World War II hero and lifelong public servant. While Whoopi Goldberg and other panelists paid homage to Bush's character and love of family, Behar wielded an old Bush quote about federal Clean Air Act amendments to attack Trump on climate change. Her narcissistic pledge to become a "one-issue voter" on "pollution and the greenhouse effect" was interrupted when co-host Meghan McCain forcefully objected to the hijacking of their short-lived unity message.

Instead of apologizing for her ill-timed lapse into Trump Derangement Syndrome, Behar ripped into McCain while Goldberg cut to a commercial break. Not-so-joyful Joy reportedly shrieked in earshot of the audience: "Get this b---- under control" and told producers "If this s--- doesn't stop, I'm quitting this damn show. I can't take this much more."

Neither can my ears. Can't we just all get along?

MSNBC's Mika Brzezinski displayed a similar lack of restraint, extolling the Bush's legacy of bipartisanship not for its own sake—but to carp about how "over the last two years deviancy has continued being defined down by this current president."

The Washington Post's lead article on Bush's passing bemoaned: "'Honorable, gracious and decent': In Death, Bush Becomes a Yardstick for President Trump." Yes, it's a virtue-signaling yardstick to wallop Trump with in hopes of beating him into Beltway media submission.

Over at CNN, correspondent Jamie Gangel derided Trump's somber visit to the U.S. Capitol to pay his respects as Bush 41's casket arrived at the rotunda to lie in state. Gangel trashed Trump's ceremonial salute to Bush as "theatrical" and rejected veteran Beltway commentator David Gergen's assessment that Trump deserved credit for his decorum.

"I'm concerned that we shouldn't give credit to someone for not kicking dirt on the grave of a person who just passed away," said Jeffery Engel, rebuking Gergen during an interview with CNN anchor Anderson Cooper. (Yes, that's the same Cooper who demonstrated his commitment to civil discourse by infamously mocking tea party conservatives by using a degrading slang term for an oral sex act—also in an interview with poor David Gergen.)

Let's stop pretending and give the historical whitewash a rest. This isn't about celebrating "civility." It's about weaponizing "civility." The newfound fans of the Bush clan spent years demonizing them as bloodthirsty warmongers and dynastic oppressors. Bush the Younger was lambasted as a "chimp," beheaded in protest posters, and assassinated in off-Broadway plays. When liberals now praise the Bushes' "civility," what they are actually rewarding is the GOP establishment's capitulation to liberal principles of big government and elitist comity.

Because the Bush family refused to fight back vigorously against media smears, daily Hollywood abuse and partisan slime, they're considered paragons of virtue from whom Trump is lectured to "learn." According to swamp etiquette, it's uncouth to call out profane, deranged haters who have no qualms about letting their anti-Trump freak flags fly as decent Americans mourn.

"Civility" is in the eye of the bemoaner.