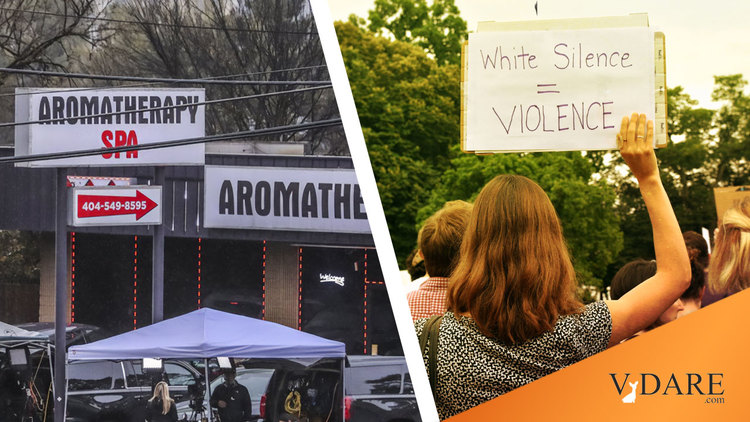 As Steve Sailer notes, the MSM finally has a Great White Defendant in the Atlanta mass shooting. But the Regime Media's hysterical coordinated effort to make the shooting about "hate" (despite its having nothing to do with race), is another Blood Libel against the Historic American Nation. 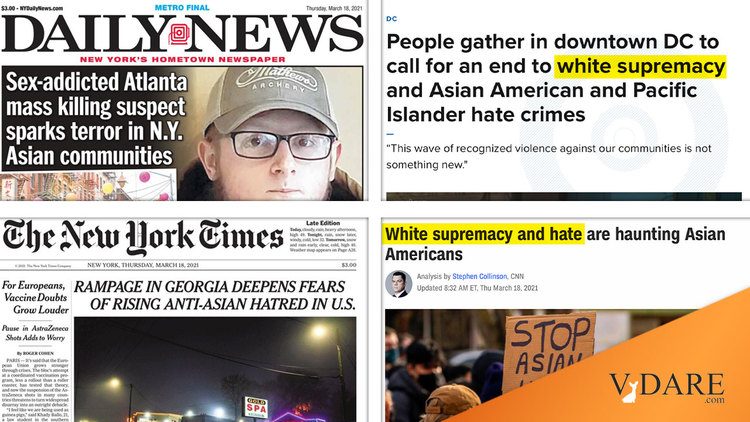 "Aaron Long, the mass murderer who killed eight people (six Asian, one white, and one Hispanic) in  Atlanta massage parlors says that he wasn't motivated by racism, but by "Sex Addiction." What that means is that like Jeffrey Dahmer, who also had Asian victims and who also denied racism, he didn't hate Asian women—he loved them.

The question with the headlines below is: is this a coordinated attack, based on Democratic Party talking points,  a Journolist-style MSM conspiracy (the 2007 Journolist email group that helped elect Obama was not a conspiracy theory, it was a literal conspiracy) or is it just mental illness—they can't help themselves?

In the case of the modern MSM, we should never attribute to stupidity or mental illness what can be adequately explained by malice.  See my  “It’s All A Damned Conspiracy”—When Black-On-White Murders Contradict The Narrative, The MSM Doesn’t Want You To Know." 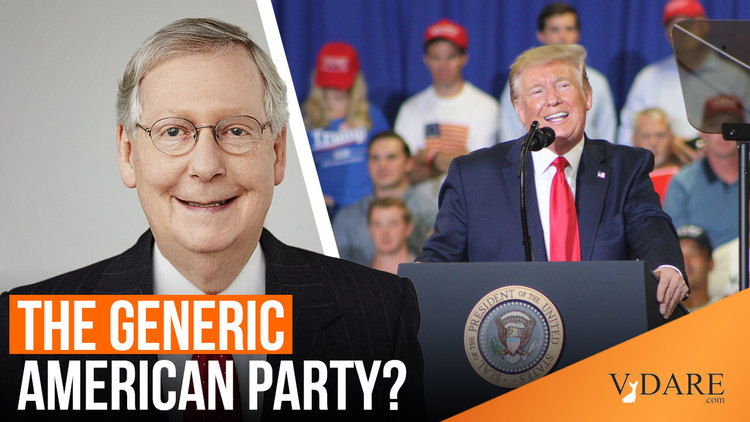 It’s all too obvious that the Media/Democrat Complex intends to make the Atlanta massage parlor shootings into an Anti-Asian White Supremacist Hoax, just as it is perpetrating the Capitol “Insurrection” Hoax and, before that, the long-running RussiaGate Hoax. Like Black Lives Matter, this is a Blood Libel on White America. (I write as a Hispanic immigrant with some black blood.)

But as we go to pixel with this article, no member of the Congressional GOP, despite its role as GAP— “Generic American Party”—has spoken up to defend the honor of the racial group from which it draws the vast majority of its votes. Why not?

The flimsy Civic Nationalism that the Civil Rights Revolution brought about came to a crashing halt after George Floyd died last May, in large part due to the lethal amounts of fentanyl in his system, not because of the actions of “racist” cops. But, alas, we do live in a post-truth America, so the Media/Democrats went on a frenzy against White Americans."