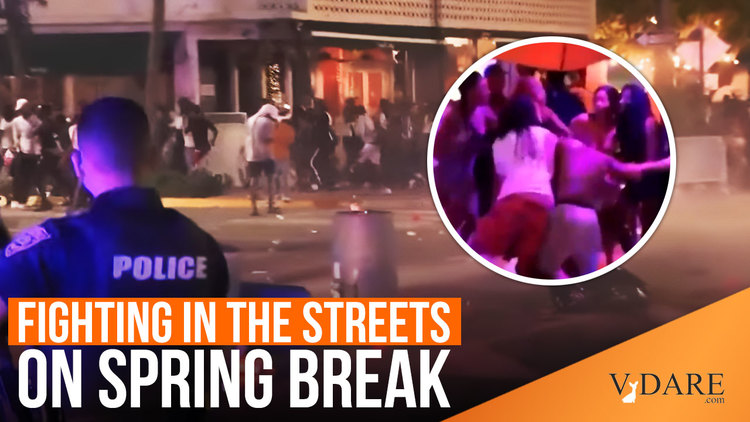 The Racial Reckoning Goes On Spring Break In Miami Beach

Earlier: Who's Rioting During Spring Break In Florida? Who Do You Think?

The national media will tell you #MiamiBeach issued a state of emergency and shut down because of the crowds and some will lie and say it's because of Covid. That's only half the story. Here are some videos of what is really going on.

This happened TWICE at the same Resturant pic.twitter.com/n2aPnRlAHX

The city has been criticized for its enforcement of the curfew in South Beach over the weekend, when the police used pepper balls to try to disperse crowds.

The police fired pepper balls to disperse crowds after an 8 p.m. curfew went into effect on Saturday. Local Miami officials said people had flocked to the city because of its relatively few coronavirus restrictions.

One day after the spring break oasis of South Beach descended into chaos, with the police struggling to control overwhelming crowds and making scores of arrests, officials in Miami Beach decided on Sunday to extend an emergency curfew for up to three weeks.

The officials there went so far as to approve closing the famed Ocean Drive to all vehicular and pedestrian traffic from 8 p.m. to 6 a.m. — the hours of the curfew — for four nights a week through April 12. Residents, hotel guests and employees of local businesses are exempt from the closure.

The strip, frequented by celebrities and tourists alike, was the scene of a much-criticized skirmish on Saturday night between sometimes unruly revelers who ignored social distancing and mask guidelines to curb the coronavirus, and police officers who used pepper balls to disperse a large crowd just hours after the curfew was introduced.

The restrictions were a stunning concession to the city’s inability to control unwieldy crowds of revelers whom the city and the state of Florida have aggressively courted amid the continuing coronavirus pandemic.

“I believe it’s a lot of pent-up demand from the pandemic and people wanting to get out,” David Richardson, a member of the Miami Beach City Commission, said on Sunday. “And our state has been publicly advertised as being open, so that’s contributing to the issue.”

In an emergency meeting, the commission approved maintaining the curfew in the city’s South Beach entertainment district from Thursday through Sunday for three more weeks, which is when spring break typically ends. Officials also kept in place bridge closures on the nights of the curfew along several causeways that connect Miami Beach with the mainland.

But if you keep reading deep into this NYT news article, you get to the part where the reporters let slip the Off-Narrative facts:

The city’s decision to send police personnel in riot gear into the entertainment district on Saturday, only a few hours after the curfew was announced, was heavily criticized, especially by local Black leaders. They noted that many of the revelers dispersed by the police were young African-Americans.

“It’s the same group of kids that are in South Padre Island right now, except those kids happen to be white,” said Stephen Hunter Johnson, chairman of Miami-Dade’s Black Affairs Advisory Board, referring to the popular spring break destination in Texas.

Mr. Johnson said the city had done a poor job of rolling out the curfew and enforcing it.

“This entire economy thrives off vacation,” he said. “But when you have kids that feel as if they are being overpoliced or policed differently in an environment post-George Floyd, where we don’t shirk back from that but we confront it head-on, this leads to situations where the officers feel understandably like they’re being put in an unfair situation.”

In other words, blacks increasingly feel like the infinitely-lauded Racial Reckoning means, in effect, that they don’t have to obey the Law.

During the early years of the French Revolution even before the full rise of Napoleon, Edmund Burke observed/predicted:

The Revolution was made, not to make France free, but to make her formidable.