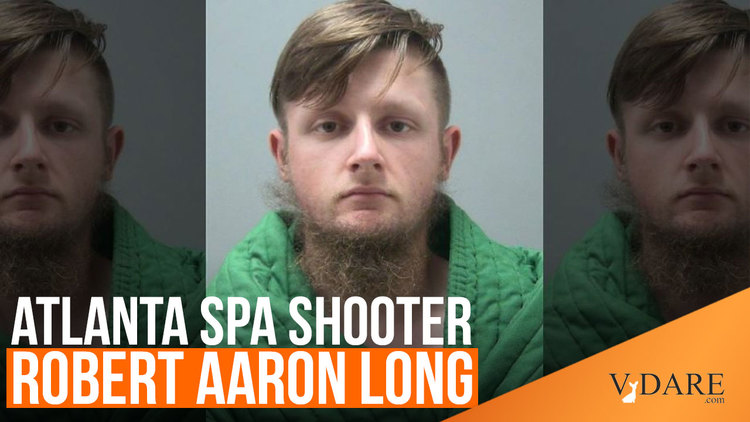 The Great White Defendant: First Mass Killing By A White Man Since 2019

As I pointed out in my review of Ayaan Hirsi Ali’s Prey, Northern Europe has a major problem with growing harassment and criminality against women walking down the street. But nobody was supposed to talk about it because the harassers aren’t Northern Europeans. But then a white policeman was arrested for the London murder of an attractive young white woman. This emergence of one of Tom Wolfe’s Great White Defendants means that now everybody in Britain is talking about the problem of violence.

Similarly, the ongoing attacks on Asians in America could be talked about as long as you blamed it on Trump for Reasons, but the actual specifics of the cases (most of the attackers were blacks or immigrants) were a massive hot potato. But, now, some white guy has murdered six Asian women (plus two whites, and wounded a Latino man), so everybody can safely talk about the crisis of violence against Asians because we have our Great White Defendant.

The recent mass shootings provide good examples of my concept (which I documented recently in “Black Lives Murdered“) of two main types of mass shootings, depending upon whether there are more dead or more wounded. The Massage Parlor Massacres killed eight and wounded one, which sounds like a white or Asian perp.

In contrast, in Chicago over the weekend, a mostly peaceful party intensified, with 13 wounded and two dead. Not surprisingly, that was a virtually all-black affair.

This was the first Columbine-style mass murder shooting by a white since 2019. Despite the tumult of 2020, there were only two “I Don’t Like Mondays”-style mass shootings last year, one by a black and one by a Hispanic.