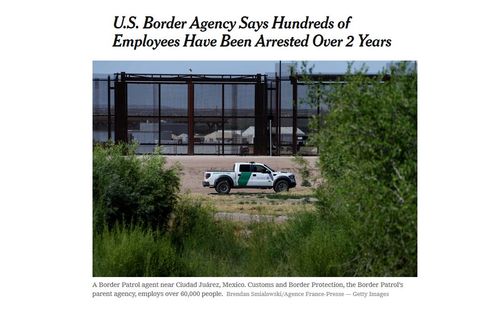 NYT Attacks Border Patrol For Misconduct Record, Not Realizing That They're Talking About HISPANIC Officers

It’s not the coyotes and contrabandistas, it’s the Brown Run Border, the Hispanic corruption that permeates the U.S. Border Patrol and the Office of Field Operations in U.S. Customs and Border Protection (CBP) that’s causing the problems. But for the Lying Press, it is about the purpose of the organization, not the corrupt and criminal employees CBP is forced to hire because of affirmative action and Obama policy.

More than 500 employees of the United States’ primary border security agency were charged with drug trafficking, accepting bribes and a range of other crimes over a two-year period, according to reports released on Friday.

The reports, released by Customs and Border Protection’s Office of Human Resource Management and its Office of Professional Responsibility, covered the years 2016 and 2017.

U.S. Border Agency Says Hundreds of Employees Have Been Arrested Over 2 Years, by Ron Nixon, October 12, 2018

Most of the problems were those typical of Hispanics; drugs, alcohol, and wife beating.

The most common arrests were related to misconduct involving drugs or alcohol; the reports concluded that 109 employees faced those kinds of charges in 2016, and 119 in 2017.

Domestic or family misconduct was the second most common reason for the arrest of the border agency employees—51 in 2017, up from 44 the previous year, the data show.

The real concern by the Times is not the misconduct of (mostly) Hispanic BP officers, but the use of force by the Border Patrol in general, something I’ve addressed repeatedly on VDARE and my since disappeared Federale Blog. The Times notes with despair that Agents and Officers are not being jammed up for false charges of excessive force, something that has been a bee in their bonnet for years, part of their war on the Border Patrol and immigration law enforcement for years.

Customs and Border Protection has been accused of using excessive force against migrants. In 2017, the reports showed, the agency opened 252 cases involving use of force by border agents, down from 338 in 2016.

Twelve excessive force cases in 2017 resulted in the serious injury or the death of an individual, down from 23 in 2016, the data showed.

The reports follow several high-profile acts of violence this year by Border Patrol agents around Laredo, Tex., focusing national attention on the agency.

Last month, an agent who had worked at the Border Patrol for 10 years was charged with killing four women and assaulting a fifth over a two-week period. The agent, Juan David Ortiz, 35, was arrested after fleeing Texas state troopers who had confronted him at a gas station; he was found hiding in a hotel parking garage off an interstate.

In May, a Border Patrol agent shot and killed Claudia Patricia Gómez González, a 19-year-old Guatemalan woman who had crossed the border illegally near Laredo. Authorities said the agent had been searching for illegal activity in a residential area when he was attacked with blunt objects by a group of people that included Ms. Gómez.

Not mentioned is that Border Patrol Agent Lonnie Schwartz was found not guilty of charges, but is being tried again for the same offense. And you thought that double jeopardy was prohibited!

Sadly, but not surprisingly, Breitbart attacked the NYT on the issue: New York Times Smears Border Patrol Agents, CBP Officers with Misleading Tweet. Civic nationalists can’t address the racial issue, nor can they address the real problem of corruption and misconduct by Hispanic employees of CBP.